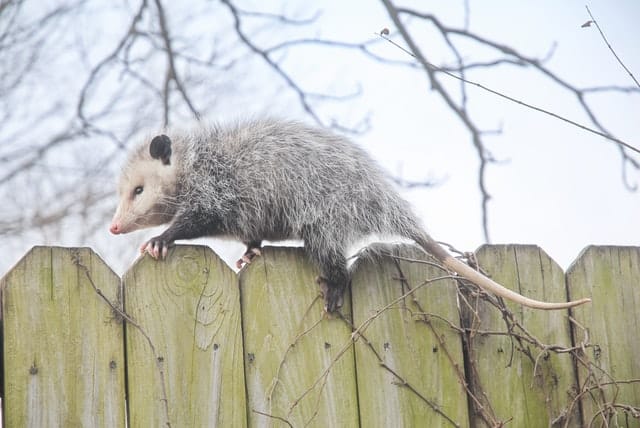 Opossums are a type of small to medium-sized marsupials that are native to the Americas. Not to be confused with Australia’s own native possums of the Phalangeridae suborder, opossums can be found in North, Central, and South America. The most notable is the Virginia opossum (sometimes called the Common opossum) which is the only marsupial of its kind found in the United States and Canada.

This article lists everything you need to know about these marsupial members of the Didelphidae family, from the animal’s habits, lifestyle, and geographic range to its fascinating evolutionary history.

What Type of Animal Is an Opossum?

Opossums are a group of marsupials within the Didelphimorphia order.

There is a common misconception that opossums are part of the rodent family, making them close relatives to rats and mice. Thanks to their superficially similar looks and common behaviors, some people even think that they are connected to raccoons!

However, opossums are marsupials. This means that they carry their young, known as joeys, in a pouch. Immediately after birth, the joeys must find their way from their mother’s birth canal up to the pouch where they latch onto a teat to access their mother’s milk. Here they live from the time they are born until they leave and are ready to make their way in the world.

Members of the order of Didelphimorphia are closely related to other marsupials including native Australian animals such as kangaroos, koalas, wombats, wallabies, bandicoots, and Tasmanian Devils.

What Are the Characteristics of Opossums?

Opossums are semi-arboreal opportunistic omnivores. As mammals, they also give birth to live young.

They are not particularly large mammals and generally grow to the size of a domesticated housecat. If you ever encounter an opossum in the wild, you’re unlikely to suffer a bite or scratch because they are typically non-aggressive and more likely to run away than confront you.

The best way to spot an opossum is to look upward as you make your way around your local neighborhood. They are agile and climb with ease in trees, on fences, and are even known to patter over rooftops.

Opossums also have sharp claws, strong hind legs, and a long prehensile tail. All are ready-made attributes that make climbing a breeze. But opossums are nothing if not versatile, and they are just as comfortable making their way on the ground as they are in the heights above.

However, they will almost always choose to make a nest for themselves in a deep hollow high in a tree.

Opossums are versatile and robust eaters and are happy to consume almost anything they come across. Both meat and plant matter are part of their diet. They tend to be solitary and will forage for food at night.

For the most part, they like to eat dead animals, insects, rodents, birds, eggs, frogs, plants, fruit, and grain.

If you see an opossum gnawing on an animal’s skeleton, that’s normal behavior. They need high amounts of calcium in their diet and will eat the bones of rodents and roadkill to satisfy their nutritional needs.

How Many Species of Opossums Are There?

Opossums belong to the Didelphimorphia order and with over 120 species and 19 genera, it is one of the largest orders in the Western Hemisphere.

The modern species we know today was native to South America and came to North America during the Great American Biotic Interchange. This happened around 3 million years ago when the Panamanian Isthmus rose from the seafloor to connect the two formerly-separated continents.

The only opossum species found north of Mexico is the Virginia opossum (Didelphis virginiana).

What Is the Virginia Opossum?

Also known as the North American Opossum or simply ‘possum’, the Virginia opossum can be found throughout urban and rural areas of North America. It has the honor of being North America’s only marsupial, and the northernmost marsupial found anywhere in the world.

You are most likely to find the Virginia opossum on the west coast of the continent and in most territories east of the Rocky Mountains. It is also found in Mexico, Central America, and the Canadian province of British Colombia.

The Virginia opossum is a well-known animal, thanks largely to its habit of living amongst humans in densely populated urban areas. It also lives in rural environments including deciduous forests, open woodlands, and vast swathes of farmland.

However, the opossum loves to nest and scavenge in wet areas like marshes and swamps, and close to rivers and streams.

The Virginia opossum is an opportunistic scavenger and its keen sense of smell directs it to all types of food sources including carrion such as roadkill. Unfortunately, many opossums themselves are killed on the road while attempting to feed.

The Virginia opossum belongs to the Didelphis genus. Members are known as ‘large American possums’. It is most closely related to other members of the genus, including:

Why Are Opossums the Only Marsupial in North America?

The reason why the opossum is the only marsupial in North America has its origins many millions of years ago.

Early marsupials evolved in the Americas and they migrated between North and South America long before the continents split at the end of the Cretaceous Period around 66 million years ago. Once part of Gondwana, the marsupials of South America diversified and migrated to Australia and Antarctica.

As the Gondwana continents drifted apart, some marsupials stayed in Australia, while others stayed in South America. Those that were land-dwellers in Antarctica eventually became extinct.

When the Panamanian Isthmus rose and connected North and South America around 3 million years ago, the opossum from South America gradually migrated northwards as part of the Great Faunal Interchange. At this point, all marsupials had become extinct in North America. The opossum evolved as it migrated, gradually becoming the species of Virginia opossum (Didelphis virginiana) that exists today.

All opossums prefer a warm or tropical climate, and the Virginia opossum is the only species to have evolved to live north of Mexico where temperatures get progressively cooler.

How Long Have Opossums Existed?

The ancestral marsupials of the opossums we know today, and their closest relatives called metatherians, were diverse and abundant during the Cretaceous period which lasted from around 145 to 66 million years ago.

It was a time of warm weather, high sea levels, no ice caps, and the landscape was dominated by dinosaurs.

The oldest opossum fossils are much younger, dating to the early Miocene, which is around 20 million years ago. This was a time when South America was still part of the Gondwana continent. By the late Miocene, opossums had begun to diversify throughout South America where they thrived and continued to adapt and evolve to suit their environment.

How Do You Tell the Difference Between a Possum and An Opossum?

Apart from sharing an almost-identical name, possums and opossums share many characteristics including:

However, they also have many differences that can help you tell them apart: