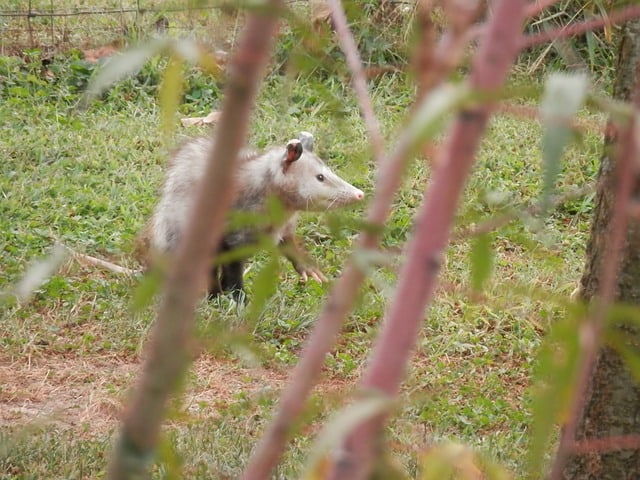 There are many things that can be considered threats to opossums. In spite of that, American opossums are in no danger of going extinct or even being put on the endangered list.

This article looks at the dangers facing the American opossum, as well as their status in terms of population.

According to wildlife experts, the opossum is in no way endangered. The overall population is considered stable, and conservationists list it under the heading of ‘Least Concern’.

That being said, there are multiple species of opossum. While the common American opossum is in no danger, there are subspecies, like the Mountain Pygmy Opossum of Australia, which may be at risk due to human encroachment on their native habitat.

Are There Too Many Opossums In Some Places?

The question of opossum population, or overpopulation, is an interesting one. Opinions vary from region to region and tend to depend on whether or not you consider opossums a nuisance or a benefit.

Those who view opossums as helpful animals say they are widespread and easy to find, but not a problem. Those on the nuisance side of the argument say that their increasing presence in human living areas is a sign of overpopulation.

According to wildlife experts, the overall opossum population is stable, suffering neither overpopulation nor decline. Their omnivorous nature means that, in terms of population versus food source, opossums are doing fine.

Do Opossum Populations Decline In Some Areas?

According to wildlife experts and biologists, there are some areas where the opossum population has declined. In some instances, this is considered a temporary situation, whereas in others it’s considered a serious trend.

What Contributes to Opossum Population Decline?

Northern states of the US experience frequent temporary declines in opossum population due to harsh winters. Because opossums are not adapted to severe winter weather, long periods of extreme cold can decrease the local population.

Other states say that human encroachment has caused a slight but noticeable decline, despite opossum adaptability. Competition with animals like raccoons and vehicular encounters have been shown to have a negative impact on the opossum population in areas like Oregon.

In the Florida Everglades, wildlife experts report a drastic decline in opossum numbers due to the appearance of an invasive species of python.

What Are Some Potential Future Dangers To Opossums?

Human vehicles and activity will continue to be threats to the opossum population. Likewise, competition for food sources may end up being a concern for America’s only marsupial.

The continual presence of predators may become more of an issue in the future, especially as predators move into previously unoccupied areas after their native habitats are compromised.

In recent years, experts have also noticed an impact on the opossum population due to habitat reduction. While opossums are adaptable and can make their homes in a variety of locations, they prefer wooded areas and tree hollows.

The loss of their preferred sleeping sites means that opossums may be forced to den in less safe areas, to their detriment. This is especially true when they den in locations on human property, where they may be considered pests to be gotten rid of.

Are There Some Kinds Of Opossums That Have Gone Extinct?

The potential loss of opossum species is a matter of some debate, at least in North America. While Australian opossum populations have declined to the point of having two species on the endangered list, the general consensus is that the American opossum is doing well.

In terms of the global population, it’s thought that there are a few opossum breeds that have died out, such as South America’s One-Striped Opossum and Argentina’s Red-Bellied Gracile Opossum. Other opossum breeds show signs of being vulnerable, and in some cases, sightings are too rare to give accurate information.

Of those opossum breeds considered native to the US, all of them are currently on the conservationist ‘Least Concern’ list.

What Are The Primary Threats To Opossums?

Human expansion can destroy opossum habitats, leaving them no safe place to shelter and no safe food sources. The increased presence of motor vehicles brings with it the increased possibility of opossum fatalities via roadside encounters.

The most dangerous threat of all, however, is active human intervention. In places where opossums are viewed as pests or dangers, they may be trapped and removed to more dangerous habitats, hunted, or even poisoned.

‘Playing possum’ or playing dead: It’s a defensive strategy meant to discourage predators. According to experts, it’s also an involuntary reaction, a result of the opossum going into shock.

As a survival reflex, it can be effective. Many predators will lose interest in an ‘already dead’ prey animal and go on to find something more lively to hunt.

However, it’s not a controllable reflex. Opossums can’t just snap in and out of ‘playing possum’ mode. They can’t react to other threats, or if the predator doesn’t take the bait.

As a result, the opossum might deflect the attention of the original predator, only to fall prey to other dangers before it recovers.

Which Animals Prey On Opossums?

Aside from feral cats and dogs, there are a number of predators that consider opossums prey. These predators include:

Are Opossums In Danger Of Household Pets?

Household pets are generally capable of taking on an opossum. However, they are less likely to do so than feral cats and dogs, or wild animals.

Opossums are good at making themselves look threatening by hissing and snarling. And despite their small size, they have very sharp claws and teeth.

Most animals raised as household pets aren’t interested in tangling with opossums. Even if they do decide to hunt an opossum, they’re more likely to fall for the ‘playing possum’ trick and lose interest before actually doing the opossum much harm.

When it comes to opossums and cars, opossums are definitely getting the worst of the encounters. This is in part because opossums can’t really identify the danger a car represents.

Oddly enough, the ‘playing possum’ reflex works against them when it comes to encountering vehicles. Often, an opossum will ‘play dead’ in response to a car’s approach, only to be hit by drivers who think it has already expired.

How Many Opossums Get Hit By Cars?

There’s no exact count, but experts are pretty certain that opossum/car encounters and fatalities number in the hundreds of thousands per year, if not higher.

Why Do So Many Opossums Get Run Over?

Opossums have poor eyesight and do most of their detection of both food and predators by scent. They can’t smell a car coming, so they may not realize they’re in danger until it’s too late.

Another factor is that opossums are primarily nocturnal. They’re usually found on the roads at night, which makes it harder for drivers to spot them.

Playing dead under stress doesn’t help. An opossum may ‘play dead’ in the middle of the road and be mistaken for a fatality, which makes drivers less concerned with avoiding it.

Believe it or not, opossums can also be hunted for food. Historically they were used in stews.

The legality of hunting opossums varies from state to state, as do the practices for opossum hunting and trapping.

Many areas consider opossums nuisance animals or pests. They can cause a mess, and have the capacity to be very destructive.

However, there’s been a growing movement to recognize the benefits of opossum presence and their place in the ecosystem. Opossums are resistant to many diseases and may reduce the number of animals that carry these diseases.

They’re also resistant or immune to things like rattlesnake venom, and may even kill snakes in their territory.

Whether they’re a pest or a benefactor seems to be largely a matter of personal opinion, though it may also have to do with the numbers of opossums in the area. If an area has too many opossums, they can become pests by getting into things they shouldn’t in order to find food and safe nesting areas.

Trapping Opossums and Putting Out Poison

Different regions have different methods for opossum removal. The most commonly recommended method is to catch the opossums in a live-catch trap and relocate them.

Putting out poison is actually considered the worst course of action, for a number of reasons. Not only can it take a while to work, but then you have to find the opossum after it expires…no easy task.

Trapping is considered a much better option, especially if you’re not an experienced small-game hunter.

You can set a simple cage trap with fruits and such as bait. It may take a few days, but in the end, it doesn’t take much work, just patience.

You can also call local wildlife services, who will either perform a professional opossum trap and removal or can give you advice as to the proper procedure and equipment. They’ll also be able to tell you where to find the best places for relocating your opossum.