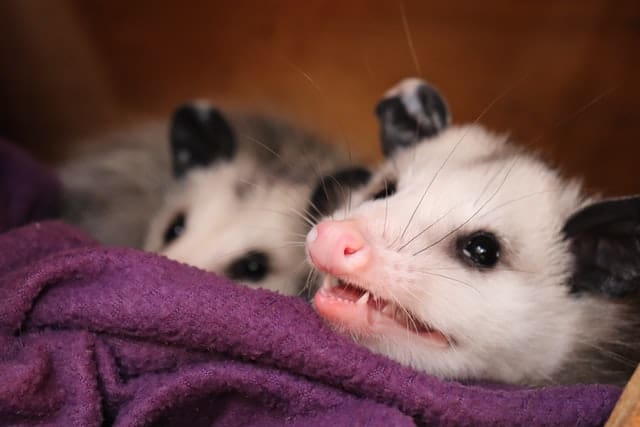 Opossums are white and gray scavengers that frequently raid garbage cans and dumpsters. They are nocturnal marsupials, which means that their vision is more adapted for seeing during the night.

Do you ever wonder why opossums don’t run away more often when they see cars coming? The explanation is that opossums usually got confused with headlights due to their poor eyesight.

Opossums also depend on their sense of smell to find food for the same reason. Everything about the vision of these fascinating animals is more complex than it appears, so let’s examine their eyesight in greater detail!

Do Opossums See Well? (Are They Blind?)

Despite what some people think, opossums are not blind, though they have a generally weak vision.

The reason that people think that opossums are blind, might be their slow and clumsy behavior.

Due to their nocturnal lifestyle, opossums typically have heightened senses adapted for nighttime activities. They also have more dilated pupils and their eyesight is much better at night as opposed to during the daytime.

How Is The Opossum’s Vision In Daylight?

Opossums are daylight-sensitive creatures; they generally do not move much during the day to protect their extremely sensitive eyes from excessive stimulation.

However, seeing an opossum out during the day is not exactly rare.

Being out during the day is, on the other hand, far from easy for the opossum since they have difficulties seeing clearly in broad daylight. Usually, the stress when threatened in daylight results in shock that induces their comatose state, commonly misunderstood as playing dead.

Can Opossums See In The Dark?

The night vision in opossums is exceptional. As nocturnal creatures, opossums’ eyesight sharpens dramatically at night due to their strongly dilated pupils.

In addition, the number of rod cells in the eyes of nocturnal animals is higher than that of day-active animals. The rod cells let them see in the dark by serving as light sensors that let the light enter.

Can Opossums See Well In The Distance?

They can only see a relatively poor distance of about 6 to 8 inches ahead of them. While the opossum’s vision is weaker than that of other animals, it can easily distinguish an insect at a distance.

And at 4 inches, the opossum’s close vision allows it to distinguish between an insect with a diameter of 0.2 cm and larger.

Yes! Opossums struggle to distinguish between different colors even though they have color vision.

This animal’s close relationship to the lineage of Australian marsupials is evidence that they may have a kind of color vision different from that of humans. In fact, scientists discovered that opossums can clearly see one or two colors (dichromatic color visions) contrary to the human trichromatic (three) color vision.

Usually, color vision is an ability that animals lose (or diminish) in the dark. Since opossums are nocturnal animals, their inability to fully distinguish color has been linked to the fact that they mostly use their vision at night.

Instead of color vision, the opossum’s and other nocturnal animals’ eyes adapted to gather a lot of light making them identify light intensity better during the night.

In other words, we can say that identifying the brightness of the light contributes more to the opossum’s survival than the ability to differentiate colors.

Their cornea is large, which allows the crystalline lens to have a large diameter and the pupil to be the same size. The opossum’s retinal image of a bright object is about as bright as that of a cat, which is 6 times brighter than that of a human eye.

What Color Are Opossums’ Eyes?

The opossum’s dark eyes are one of the things that make it stand out. Opossums have whites and irises, but they look round dark black from far away in daylight because their pupils are so big. The colors turn to be in the shades of green in the dark.

Do Opossums Have Big Eyes?

Opossums’ eyes are very prominent, and their large and wide pupils tend to cover the entire front eye when there isn’t much light.

The purpose is to let more light into the eye so that the image on the retina will be brighter. Opossums have unusually large eyes to help them see better at night.

Why Do Some Opossums Go Cross-Eyed?

Strabismus, which is when the eyes are not in the right place, can happen in opossums when fat builds up and pushes on the eyes. Most opossums store fat in their tails, but you might be surprised to learn that female opossums often store fat behind their eyes!

When opossums gain too much weight, the fat in their bodies makes their eyes look crossed. Unfortunately, the more an opossum is obese, the bigger its tail becomes and the more cross-eyed.

Their crossed eyes are due to them being overweight, a common problem for opossums that are kept as pets. Most of the time, this is because they live much longer in captivity than they do in the wild.

Pet opossums also don’t have to look for food all the time like they do in the wild. When we put on weight, it’s hard to get rid of it again, and it’s the same case with opossums.

But don’t worry; an obese opossum is not in pain and can still live normally.

Do The Opossum’s Eyes Glow?

The opossum’s eyes light up when exposed to bright light like headlights. Possums reflect light resulting in pinkish-red to red eye shine. The glow is caused by the reflective layer in the upper retina, called the Tapetum lucidum. The pupil of an animal with a Tapetum lucidum seems to glow when light is shone into its eye.

Opossums benefit from better night vision since light is reflected on the retina. As a result of their nocturnal activities, their dilatation is exceptionally high. And because of the different appearance of their pupils, it makes other observer feel unsettled while staring directly at their eyes.