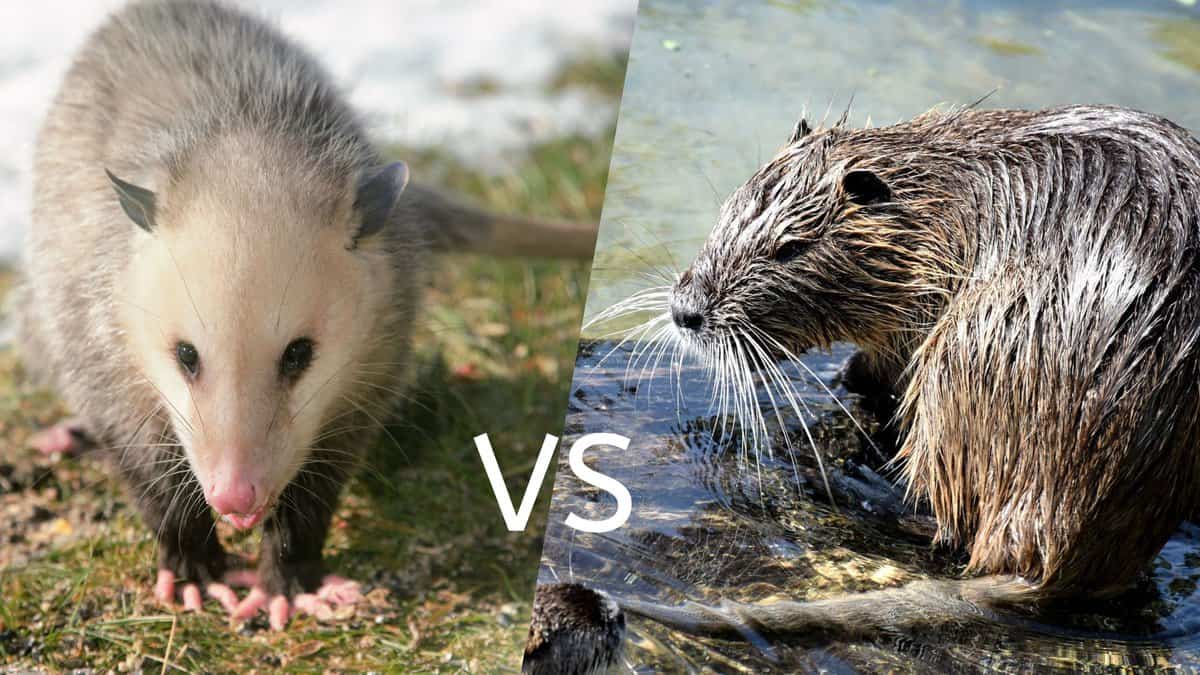 Arguably two of the most underrated creatures roaming around North America, muskrats and opossums are often mistaken for one another. So what’s the difference?

Quite a bit, as it turns out. Though they may look somewhat similar, muskrats and opossums have very different characteristics that set them apart. In this post, we’ll take a closer look at these two furry critters and outline some of their fundamental differences. Read on to learn more!

What’s The Difference Between A Muskrat And An Opossum?

At first glance, muskrats and opossums may seem quite similar. Both are small, furry animals with long tails. However, there are several key differences between these two creatures.

For one thing, muskrats are semiaquatic creatures living in marshes and wetlands,

while opossums are land-dwelling animals found in woods and forests.

Additionally, muskrats have webbed feet that help them swim, while opossums have opposable thumbs that enable them to climb trees.

Finally, they both may be omnivores but forage their food in different places. Muskrats feed on aquatic plants and animals, while opossums will eat just about anything from your porch to insects.

While they may look alike at first glance, muskrats and opossums are actually quite different creatures.

Are Muskrats And Opossums Related?

While both animals can be seen in North America, and many people might think they are related because of their rat-like features, the truth is… they are not related at all.

Muskrats (Ondatra zibethicus) are large amphibious rodents, which are closely related to rats, hamsters, and lemmings. On the other hand, the opossum (Didelphis virginiana) is a marsupial or pouched mammal, thus is more related to kangaroos and koalas.

Fun fact: Did you know that opossums are the only marsupials species that live in the United States and Canada?

Do Muskrats And Opossums Have Similar Diets?

Muskrats don’t have a particular preference when it comes to food. They sometimes even cannibalize their own family. Their primary food sources are plants like cattails, waterlilies, and pondweed. They also eat fish, juvenile birds, salamanders, crustaceans, and snails.

“Nature’s Little Sanitation Engineer” is a moniker given to the opossum because they help keep the neighborhoods clean and free of unwanted pests and rodents by eating them. Opossums eat a wide variety of insects and invertebrates, such as roaches, crickets, bugs, and beetles. They also love to eat snails. Yum!

Both animals aren’t picky and will feast on a wide array of food sources and eat anything their little paws get on. At the end of the day, muskrats and opossums are both omnivores, which means they both eat meat and plants. However, a muskrat’s meal can be obtained in the water, while the opossum’s food may be in your backyard.

Do Muskrats And Opossums Look Alike?

Despite their similar rat-like appearance, they do still have their distinguishable differences.

All in all, opossums and muskrats have some superficial similarities in their appearance when it comes to their tails, but the color, body shape, feet, paws, and faces are all quite different.

Are Muskrats And Opossums The Same Size?

The size of a muskrat is comparable to a huge rat. They weigh between 1.5 and 4 pounds. And can reach lengths of 16 to 25 inches. Their tails extend their length by an additional 7 to 11 inches.

Opossums usually grow to the size of a large cat but can grow even bigger. They can weigh between 6 to 12 pounds and typically have a body length of 24 to 26 inches long, including the tail.

So if you’re doing the math correctly, it would be safe to say that opossums are heavier and bigger than muskrats.

Do Muskrats And Opossums Live In Similar Burrows or Dens?

Muskrats live near the water, usually fresh water, and they prefer bodies of water that are slow moving. Their favorite locations are marshes, where the water level stays constant and provides the best vegetation for eating and constructing nests and burrows.

Opossums, on the other hand, would rather live in forested or bushy environments. They have also adapted well to living in cities and suburbs. Almost anywhere that is dry, safe, and sheltered will be a good place for an opossum to den.

Along steep banks or dams, muskrats will dig tunnels in which to live. They can also build dome-shaped lodges out of plants, sticks, and mud, a little like how beavers build dams and lodges.

In contrast with crafty muskrats, opossums would choose to lodge in burrows dug by other animals, rock crannies, hollowed-out tree stumps, and wood piles. The opossum will fill their nest with dried leaves, grass, sticks, and other materials they can find to keep it warm.

In order to avoid predators, opossums switch between several safe and functional dens.

In other words, the opossum’s and the muskrat’s living quarters are quite different.

Do Muskrats And Opossums Make The Same Sounds?

Muskrats have similar vocalizations to rats. Juvenile muskrats make a squeaking sound to get their mother’s attention.

During courtship, you will hear female muskrats produce sounds resembling a mouse’s squeaking.

When cornered, muskrats frequently shriek and growl or make a chattering noise. Also, they occasionally slap their tail on the water to warn inhabitants of potential danger.

Although opossums are one of the most silent animals, the breeding season can be the noisiest time of year for them. Opossums will emit loud clicking noises while they are looking for a mate.

They have two separate vocalizations they use when they feel threatened or irritated. The first is a loud growl. This serves as the first warning signal to another opossum or a potential predator. Opossums will hiss or even screech if this doesn’t work.

During the breeding season, aside from their clicks, their hisses and screeches are frequently heard when two males cross paths or when a male tries to mate with a pregnant female.

If a joey (baby opossum) gets separated from its mother, it will make a sound similar to a sneeze. Joeys can also hiss at their siblings when competing for the perfect spot on their cozy and furry mother’s back.

While both muskrats and opossums have their own distinct sounds, they’re actually quite different, and the two animals don’t seem to have any vocalizations in common.

Do Muskrats And Opossums Behave Similarly?

Muskrats and opossums are both nocturnal. However, in the spring, muskrats may become more active around dawn and dusk, with their behavior being related to environmental factors, weather, and food availability.

On the contrary, throughout the year, opossums spend their daytime chilling out in their comfy nests. And as night falls, they will work hard to find something to put in their stomach.

Muskrats are highly sociable creatures living together in huge territorial families, while opossums are solitary animals that often avoid each other outside of the late winter breeding season.

Can you guess what secret weapon both of these animals have up in their fur (sleeves)? If you answered “their scent”, you are correct.

The muskrat gets its name from the two specialized musk glands it uses to secrete a musky-smelling substance, which it then deposits along its travel routes and in its territory. The opossum also releases a scent, although much fouler, when playing dead.

Opossums do this behavior (playing dead) when threatened, and it somewhat resembles fainting that can last anywhere from less than a minute to several hours, causing predators to lose interest.

Fun fact: Did you know that Crash and Eddie from the movie “Ice Age” are twin brother opossums and displayed their “play dead” behavior countless times in the film?

Muskrats have exceptional skills in the water thanks to their webbed feet and tail and may remain submerged for up to 15 minutes at a time. It can swim forward or backward, you name it! And watch how superb they can swim and make that captivating V-shaped wave.

Opossums have excellent climbing abilities. And because they have a strong sense of smell and a great memory, they can remember where they found their food and go back to the same spot.

With that being said, muskrats and opossums may both be creatures of the night, but they still have unique behaviors and skills of their own.

Will Muskrats And Opossums Fight Each Other?

The answer to this question is a resounding maybe. While it’s certainly possible that these two animals could come into conflict with each other, it’s just as likely that they would simply ignore each other.

Furthermore, muskrats love to be in the waters, while opossums are much more comfortable in dry lands. As such, the chances of these two animals encountering each other in the wild are slim to none.

So, while it’s impossible to say for sure whether or not muskrats and opossums would get along, the most likely scenario is that they would simply go their separate ways.

If you insisted on putting the two in a boxing ring, however, it would be a strange fight. Both animals are quite passive and not particularly aggressive. The muskrat might squeak out loudly in terror, which might result in the opossum fainting.

But on the other hand, the opossum is significantly heavier, so if it could pull itself together, it might be able to take the muskrat in a one-to-one fight!