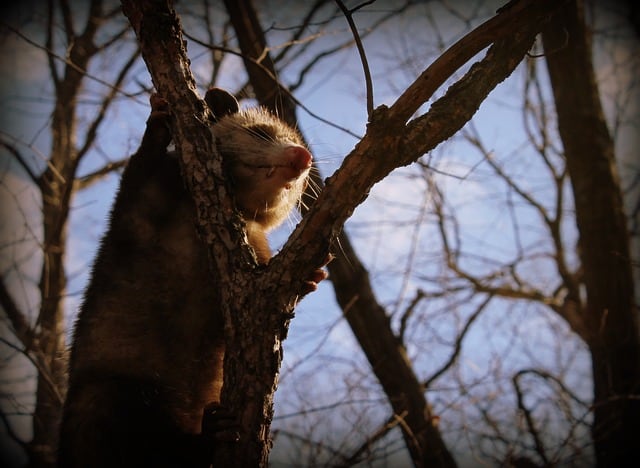 One of the unique features of opossums is that they have very strong feet that are shaped somewhat similar to a human’s foot. These feet allow opossums to climb and jump very well. While opossums may be small, this feature allows them to get away quickly if they feel threatened.

If you’re interested in learning more about opossums and how they move around, you’ve come to the right page. As you read through this page, we will answer some of your top questions about opossums climbing and jumping. Keep reading to learn more about this interesting animal.

Do Opossums Climb or Jump?

Opossums are skilled when it comes to climbing, but not the best at jumping. As mentioned above, these animals have strong feet that are shaped similar to human beings. These strong feet allow the opossum to pick up a lot of speed when they run, at an average of 3.5 miles per hour.

Since these critters are so speedy when they run, they have the momentum for climbing. Even though they are small, opossums are very good climbers. Unlike raccoons, when an opossum climbs, its claws don’t create damage.

While their speed attributes to their ability to climb very well, it’s not the only helpful feature. One of the other reasons an opossum can climb is because they have 2 big toes on each foot. This is called a hallux, which makes climbing a lot easier for these marsupials.

It’s very common to find an opossum climbing a tree because that is where they can find food and shelter. However, the hallux (or double-toe on their feet) allows them to climb other objects with just as much ease. If an opossum is frightened by a dog or other animal, they will climb a nearby fence to get away.

Opossums have been known to climb walls and roofs as well. Another reason that an opossum can climb so well is that there are friction ridges on their footpads. This helps them achieve a better grip any time they need to climb.

How High Can Opossums Climb?

Since opossums have the right physical attributes to climb very high, they can easily get to the top of a tree, into your gutters, on your rooftop, or even in your attic. Opossums are highly skilled climbers, so there isn’t a limit to how high they are able to climb.

Are Baby Opossums Good Climbers Too?

A newborn baby opossum won’t be good at climbing until it’s at least 100 days old. One interesting fact about opossums is that they are only pregnant for 13 days. When the baby opossum is ready, it will travel from the mother’s birth canal to her pouch. Typically, it will stay in the pouch with her for 50 days.

After 50 days, they will be able to leave their mother’s pouch, but they will only climb onto her back. The baby opossum will still rely on its mother to carry it around. It won’t be until the baby is approximately 100 days old that it will be able to start taking care of itself and be able to climb on its own.

Why Do Opossums Generally Climb?

Another reason opossums will climb is to find a safe spot to hide. When they feel threatened by a predator, they know they have a better chance of getting away from it if they can climb out of its reach. Opossums are easily frightened and they don’t have any skills when it comes to fighting. This is why their safest move is to flee the scene when they are scared.

Since opossums get scared easily, they will often climb to get away from something that may have spooked them, even if it didn’t mean any harm. For example, if an opossum sneaks into your yard only to notice your dog, they may climb a nearby tree just to ensure they are in a safe spot.

Do Opossums Live in Trees?

While opossums will climb trees to find safety when they feel threatened, they don’t actually make homes in trees. Most opossums prefer to live close to the ground. It’s important that they live close to a water source. However, if an opossum comes across a hollowed-out tree, it may begin to live in it.

Do Opossums Really Hang From Their Tails In Trees?

Cartoon opossums are often portrayed hanging from trees by their tails. In real life, this doesn’t happen. An opossum’s tail simply isn’t strong enough to hold its weight. It is possible for a younger opossum to use its tail to hold onto a tree a brief second or two, but it won’t be able to hold on for long.

What Are Opossum Tails For if Not Hanging?

The opossum also uses its tail for protection. They can whip their tails around very quickly, and since they are hairless it will hurt when contact is made. The tail can also be used for grabbing and transporting food, sticks, and leaves back to their den.

Their tail might not be able to hold their weight upside down for a long period of time, but it is still an impressive feature of their body. The tail of an opossum is treated as a fifth limb in order to help them climb trees. The opossum can grab things with its tail, as well as use it to keep them balanced and stable.

Opossums also have a unique ability to generate different scents with their tail, allowing them to be easily identified by other opossums passing by. A female opossum might also use her tail to generate a scent to find herself a mate.

How Can I Stop Opossums From Climbing My Walls And Fences?

If an opossum is climbing your fence, the main reason why is because it is searching for food. A common sighting of a possum climbing on your fence or walls means that they’ve found a food source on your property. To stop this from happening, here are some of our top tips.

Are Opossums Good At Jumping?

One common mistake people make is mixing up opossums (North American marsupial) with possums (Australian marsupial). While the two marsupials have very similar traits, jumping is not one of them. The Australian possum is a very good jumper, while the North American opossum can jump, just not as impressively.

Opossums might be marsupials and have a relationship with kangaroos, but that’s where their jumping prowess ends. One of the best solutions for anyone suffering from an opossum problem is building up a fence.

How High Can An Opossum Jump?

An opossum is capable of jumping, just not very high. Most opossums are able to jump a couple of feet in height. They rely on their expert climbing skills when it comes to reaching higher heights.

Do Opossum Jump From Branch to Branch?

An opossum can jump branch to branch as long as the trees are close by each other. If there is less than one meter of open space from one branch to the next, the opossum will be able to make the jump. This is why they can easily get from tree branches to your rooftop when there is a tree on your property.

Can Baby Opossums Jump Too?

A baby opossum will not be good at jumping. Since a baby opossum relies on its mother to carry it around, it will not be able to make any jumps until it is large enough to climb on its own. Even though they are related to kangaroos, opossums are not good at making high jumps.