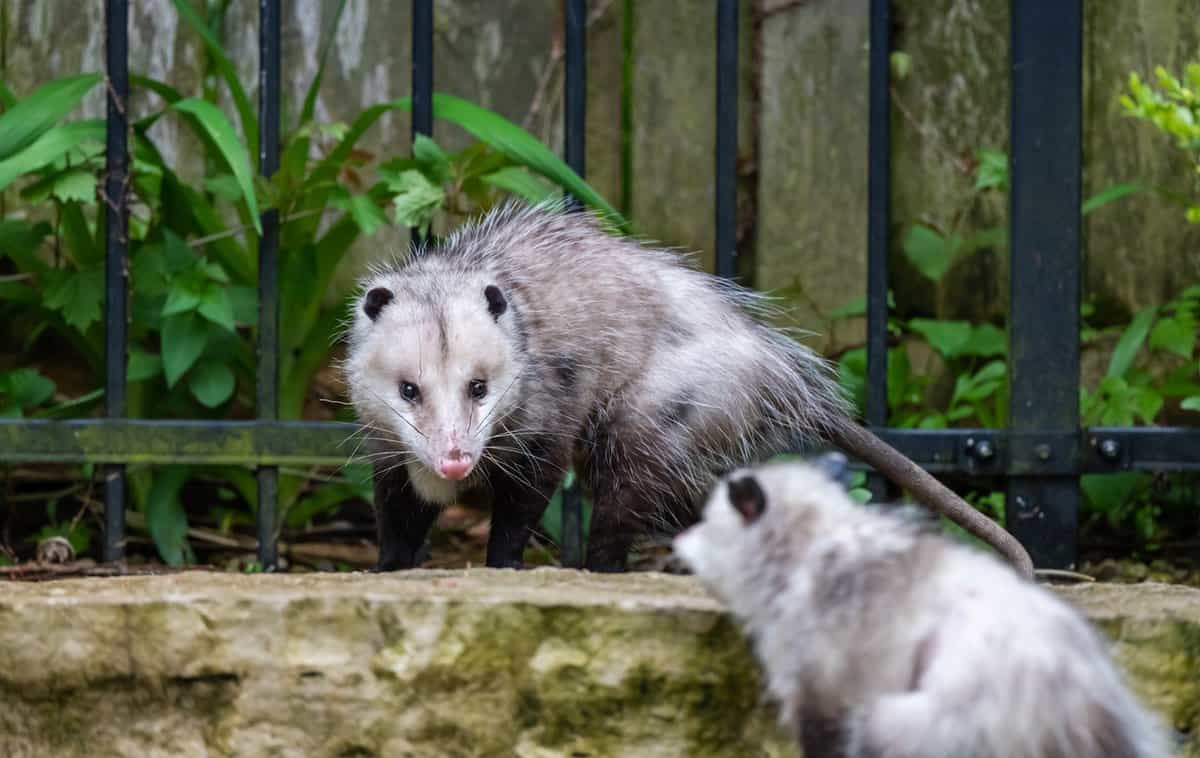 The poor opossum (Didelphidae), or just plainly “possum”, is one of the most misunderstood animals out there. Opossums are often accused of committing violent acts like preying upon domestic birds and attacking chicken coops, as well as transmitting dangerous diseases to people and pets alike. Is there any truth to these accusations? Are opossums really dangerous?

In order to prove or disprove these harsh accusations, we need to try to truly understand the nature of these medium-sized marsupials. Let’s separate the facts from fiction. Let the trial begin.

Can Opossums Be Aggressive To People or Pets?

Opossums are generally peaceful animals but in rare cases, they may show aggressiveness toward humans and pets. But this aggressiveness is literally just for show.

This is a sort of defense mechanism to protect themselves from threats and predators. In order for opossums to really become aggressive, they need to be provoked and pushed into a corner.

For the most part, these smart animals have other tricks in their sleeves.

Opossums Use Defensive Tactics In Stead Of Aggression

For instance, opossums open their mouth wide to show their teeth off whenever they are threatened. These marsupials have 50 sharp little teeth, the most of any North American mammal. They have more teeth than a bear, coyote, fox, and even a human. But while opossums may want to scare you with their teeth, they rarely bite.

Another defensive tactic opossums use, is to start to drool, which leads many of their predators to think that they are sick. This trick is used to scare off predators and even humans.

The marsupials can even go to the extreme by suddenly falling over and pretending they’re dead. The apparently “dead” animal will then release a stinky chemical out of its butt, making it smell like it’s been dead for a long time. That’s playing possum to the max!

Playing dead may sound funny but it is actually an involuntary defense mechanism that kicks in when opossums get super stressed, like being confronted with a predator. When this happens, the opossum will actually go unconscious for several minutes.

Wild opossums do not want to be touched. They don’t even want anyone unfamiliar to enter their personal space either. Don’t be surprised if an opossum does any of its tricks on you or your pets. It’s better to keep your distance and give the poor animal time to recover from the stress.

Are Opossums Safe To Pick Up?

Wild opossums should be treated with caution. They are not used to being touched or handled by humans, and it is common for their defensive instincts to kick in when you try to pick them up.

Generally, it’s not recommended to pick up a wild opossum that you find in nature, but if you have to, here are a few tips we can give:

When Will An Opossum Bite?

Opossums do not bite. They are generally “all-talk and no-bite” type of animals. They pretend to be tough and mean but all they do is hiss and growl. These marsupials, in reality, are actually quite timid creatures.

More than anything, opossums just want to avoid any type of confrontation. But if push comes to shove, they will try to defend themselves when threatened using their defensive tactics. A bite from an opossum is unlikely, but it can still happen. Always be cautious when handling them.

Like any other wild animal, opossums can carry germs that cause infection and dangerous diseases to humans. Be careful when you meet one in the wild and try to just leave it alone.

A wild opossum may carry bacteria and viruses that can cause:

Opossums may also be infested with parasites like fleas, ticks, and lice that can be transmitted to your pets. However, you’ll soon learn that the possums are not as dirty as they’re advertised.

There have also been reports of some variants of rabies among mammals in the wilds of North America. There are stories saying that opossums are immune to rabies. This is a false notion though. The correct term should be resistant. Opossums can, in fact,  contract rabies but it doesn’t happen very often.

As a general rule,  always be cautious when handling wild animals. The best thing you can do is to call the authorities and have the animal removed safely.

Can Opossum Poop Make You Sick?

Opossum poop can be very dangerous to humans. This is especially true with wild opossums that come by your property and leave their poop and pee behind.

The critters are omnivores that eat anything—fresh, spoiled, trash, and even carcasses. Eating disease-infected food transfers the germs into the opossum.

Fortunately for the opossum, it has a very robust immune system that protects it from getting sick, but the animal is still able to carry the germs for other animals or humans to get sick!

This means that when the opossum poops or pees, there’s a high probability that the bacteria, viruses, and fungi the opossum is carrying will be on the droppings and it can then be transmitted to whoever touches it. The best advice would be to handle the opossum poop and pee with care.

Here are some important tips to rememberwhen handling opossum poop:

Do Opossums Damage Your Yard, House, and Property?

Opossums are highly adaptable creatures that can live in almost any kind of habitat. They can thrive in the wild as well as in your backyard. Opossums like to hang out anywhere where there is food. They can crawl, climb, and search for holes to get to where the food is, and that might be in or around your house!

It’s important to note, however, that opossums generally do not cause damage to your property!

While opossums may take advantage of existing damages, they don’t really cause them. The holes and underground tunnels were probably done by other animals. Don’t blame the lowly possum.

What Should I Do If I See Opossums Near My House?

Oftentimes, the best course of action is to do nothing. Opossums are harmless creatures that actually provide more benefits to humans than the dangers they are accused of causing.

They are called “nature’s pest control specialists” due to their ability to keep the environment clean from rats, cockroaches, snails, slugs, and even snakes. Opossums also eat carrion of any type of animal.

The opossum is as clean or as dirty as its environment. If there are a lot of smelly, open, and overflowing garbage cans in your area, expect the animal to eat what’s in there and then do the cleaning for you. If the environment is clean, then expect the opossum to be clean as well and pose no danger to humans and pets.

Opossums are also quite hygienic animals. They always take the time to clean themselves. Did you know that opossums can clean 95% of parasites like fleas, ticks, and lice on their bodies every time they do grooming?

If you don’t like having opossums around your property, we urge you not to harm them but call the local wildlife conservation agency in your area to remove the critters for you.