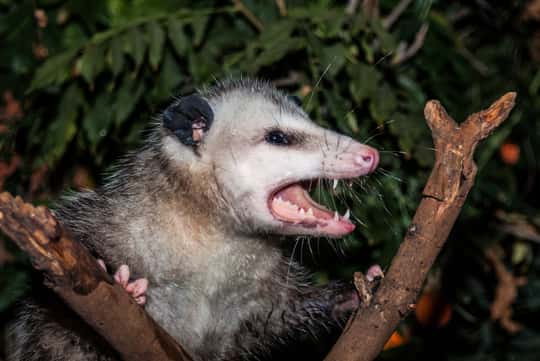 The opossum is a frequently misunderstood animal. With their sharp teeth and rat-like appearance, many people are afraid of or disgusted by opossums. The truth is, however, that not only are these little critters not violent, but they are fiercely loyal and excellent for the ecosystem. If threatened, they are great at protecting both themselves and their young.

How Do Opossums Defend Themselves?

Opossums have several different ways of defending themselves from predators. This can include their most famous method—known as playing dead or “playing possum”—but can also entail such things as hissing, drooling, and even running away.

How an opossum reacts in a confrontation with a predator depends on the situation. If the opossum is cornered, it may hiss or growl, baring its teeth to try to frighten away the predator. If it is able to see an escape route, it may try to run away, though opossums are not very fast runners.

If an opossum itself is very frightened and sees no escape route, then it will resort to the tried-and-true method of playing dead.

The most well-known way that opossums defend themselves from predators is by playing dead. Since most predators do not want to eat prey that is already dead, the opossum will pretend to be dead in order to stay safe.

The opossum will fall to the ground and lie motionless with its eyes open and its tongue sticking out. It can even secrete a super-stinky scent to convince predators that it really is dead! It will not move again until the danger is gone.

If you have ever heard the phrase “playing possum” to describe someone pretending to be dead, this is where it comes from! Opossums are famous for this behavior, and it can be nearly impossible to tell the difference between an opossum that is playing dead and one that is actually dead.

How Do Opossums Defend Their Young?

Opossums are actually marsupials, which means that when their babies are small, they carry them in a pouch, just like a kangaroo does. As the babies get older, the mother opossum will carry them on her back, ensuring that she can escape with them if necessary.

This is a primary method of defending the opossum’s young. The mother can literally keep them as close to her as possible, taking them with her if she decides to run away or even plays dead herself. If she is not able to escape with her young, then the mother opossum will resort to other methods of protecting them.

Although opossums are not inherently aggressive, if cornered, they will try to appear as threatening as possible when it comes to protecting their young. This may include actions such as hissing, opening their mouth wide, and showing off their teeth.

Opossums may also employ other defense mechanisms such as drooling. Believe it or not, excessive drooling can make predators believe that the opossum is sick or rabid, which makes them want to stay away.

Will An Opossum Try To Escape From Threats?

Yes, an opossum will try to escape from threats. If it is able to run away and avoid danger, it will certainly attempt to do so. However, opossums actually run very slowly, so they are not always able to escape this way. Playing dead is usually more of a last resort when the opossum feels cornered and escape is not possible.

After an opossum has woken up from playing dead, it will immediately try to escape from the situation it was in when it started playing dead. Hopefully, the predator will have gone away!

What Happens When An Opossum Plays Dead?

No. While opossums are not actually dead when they “play possum,” they are not quite awake, either. Playing dead is actually a shock response on the opossum’s part. Basically, the stress of the encounter with the predator causes the opossum to go into shock, which forces it into a comatose state.

While in this comatose state, the opossum appears entirely dead. Its body is limp, its tongue will stick out, and drool will come out of its mouth. It may even appear that rigor mortis has set in.

During this comatose state, the opossum is not able to wake itself up. It will be stuck in the coma for as long as it takes for the shock to wear off. The opossum will not be able to move, make noise, or even feel pain until it wakes up.

How Long Can An Opossum Keep Playing Dead?

An opossum’s comatose “playing dead” state can last a surprisingly long time—in fact, it can last anywhere from a few minutes to several hours. Usually, the comatose state will last for a longer time rather than a shorter time. Waking up after only a few minutes is relatively rare; it is more common for the opossum to remain comatose for at least forty minutes to four hours.

The opossum does not have any control over how long it plays dead for, and it will not remember how long it was playing dead for once it wakes up. It is at the mercy of its instincts, unable to start moving again until the shock has worn off.

Yes, baby opossums are capable of playing dead. This is a response that is instinctive and involuntary. In other words, opossums are born with the ability to play dead, and they can do so from the time they are able to walk on their own.

If you ever see a possum that appears to be dead, and it has live babies with it, make sure to leave it alone! The mother may simply be playing dead.

If the babies were inside the mother’s pouch when she began playing dead, or if they simply did not enter the same comatose state as their mother, they may be lingering by their mother waiting for her to wake up from her “playing dead” state.

Are Opossums Able To Control Playing Dead, Or Can’t They Help It?

No, opossums are not able to control when they play dead. This stress response is totally involuntary, and opossums cannot choose when to enter the comatose state. They are forced into it by the shock of coming face to face with a predator.

So, in a way, playing dead is not actually an act. The opossum simply becomes so frightened that they are unable to do anything else but drop to the ground. It is a fight, flight, or freeze situation taken to the extreme!

The opossum cannot move, wake up, or even feel pain when it is in the comatose state. It is almost like it really is dead—at least until it wakes up again when the threat has passed.

Once the opossum wakes up again, assuming the predator did not harm it while it was playing dead, it will be able to go totally back to normal. It will be as if the playing dead never happened.

Do Opossums Emit An Odor When Playing Dead?

Yes, opossums emit a terrible, deathlike odor when they are playing dead. The scent literally smells as if the opossum is an actual corpse, and when predators smell it, they instantly want to get as far away as possible!

Can You Wake Up An Opossum Playing Dead?

No, you cannot wake up an opossum that is playing dead. Not even the opossum can wake itself up. This is because of the comatose state that the opossum finds itself in whenever it is confronted by a predator.

Just like the reflex to play dead is involuntary, so is the state that the opossum enters. It is not able to voluntarily leave the playing dead state, just as it does not voluntarily enter it.

Do Opossums Fight Each Other?

Yes, sometimes opossums will fight each other or predators. This will not happen all the time, but there are indeed some reasons which may give opossums the desire to fight. This can range from disputes over mates or territories to a mother protecting her babies.

Why Would Opossums Fight?

Female opossums can also become very violent when protecting their babies, so if another opossum threatened a female opossum’s young, a fight could break out.

Opossums will make a squealing sound when fighting, similar to a rat’s squeal, but slightly deeper. Male opossums may also make throaty noises to warn other males away from their territory. When fighting, they may also make hissing and growling sounds.

Are Opossums Good At Fighting?

Opossums are generally very peaceful animals. They do not like to fight, and they are not the best at fighting. This is why their instincts will take over into other methods of escape from predators, like playing dead.