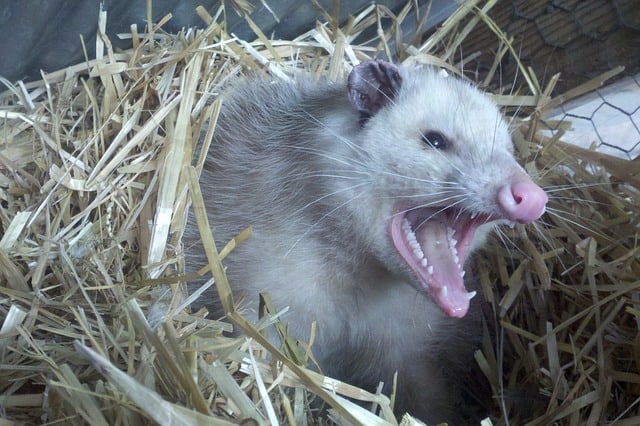 Virginia Opossums are nocturnal marsupials local to the North American region (not to be confused with possums from Australia). These animals are roughly the size of small dogs and carry their children in a fleshy pouch.

There are many interesting facts about opossums. For one thing, how do they sleep? Do they really sleep hanging from their tails?

Where Do Opossums Sleep?

Opossums sleep in nests, or burrows, that they build under decks, in hollow trees, in brush piles, or in abandoned dens dug by foxes, skunks, or other animals. Their burrows are usually filled with dry leaves or shredded paper to keep them warm through the winter.

The opossum is neither good at digging, nor nest-making, which is why the animal makes do with nesting in existing structures.

One can find Virginia opossums in a wide range of habitats, most commonly near a water source, like a swamp or a stream. While they are often found in human-populated areas, you’ll also see opossums in thickets and woodlands.

Opossums are local to Central and North America, but they can be found anywhere from Ontario, Canada to the north of Mexico and Costa Rica.

Since opossums are restricted by snow depth and temperature, they are typically found along the American west coast and east of the Rocky Mountains.

Do Some Opossums Sleep Hanging From Their Tails?

While opossums have prehensile tails – meaning, they can oftentimes use the appendage as an extra arm – the cartoonish depiction of opossums sleeping hanging from their tails is actually a misconception.

The truth is, opossum tails are only strong enough to support their weight for a short period of time. Juvenile opossums can actually hang from their tails, but not for long, and especially not while they sleep. Adults, on the other hand, are too heavy.

For the most part, they use their long, hairless tails to grasp and carry leaves to build their nest, as well as using their tails as a fifth limb by wrapping them on tree limbs and branches for added stability and balance.

Do Opossums Sleep In The Same Place Every Time?

Opossums were once considered a nomadic species, but recent research shows that these animal species maintain a fairly small home range throughout their lifespan.

They build nests in abandoned burrows and hollow trees, filling the den with shredded paper and dry leaves for warmth. They also stay put in their den for long periods of time, especially when weaning their young.

What Time Do Opossums Go To Sleep?

Opossums are nocturnal marsupials, meaning, they sleep during the day and wake up to hunt for food at night. It is unlikely to see an opossum out later than 8 AM, but it depends on how successful it has been in finding food during the night.

Since opossums are omnivores and scavengers, their diet includes insects, fruits, carrion, and even garbage.

How Long Do Opossums Sleep For?

North American opossums are typically asleep from dawn until dusk, but this slightly varies throughout the year.

In the summer, opossums might be active at the beginning and the end of the sunlit hours, too, and in winter, it is not uncommon to see opossums out during the day, because food is a little harder to come by in the cold season.

One thing worth noting is that opossums do not hibernate, but in the cold months they become less active and a little slower. This is a natural mechanism that allows the opossum to save energy and get by with less food than it would during the rest of the year.

They still need to eat, however, which is why you’ll sometimes see opossums out and about in the daytime during winter.

When Do Opossums Wake Up?

Since opossums are nocturnal creatures, they wake up and begin their nightly activities around dusk. During warmer periods, they may be awake for longer periods of time and travel greater distances, but during cold seasons, opossums display slightly reduced activity, which means that they sleep for longer.

In the winter, opossums sometimes hunt during the daytime in order to find enough food, so there’s not really a fixed time of day where you can say for sure that opossums wake up.

Do Opossums Sleep With Their Eyes Open?

While you may see the occasional opossum sleep with its eyes open during the daytime, opossums generally sleep with their eyes closed, which helps them block out the daylight which might make it more difficult to sleep for the little critters.

When open, you’ll see that their pair of opaque eyes are their most recognizable feature.

They do in fact have irises and whites, but because of their cartoonishly large pupils, opossum eyes appear totally black from a distance. This exaggerated dilation of their pupils is what helps them see at night when they hunt for food and detect predators.

They don’t see well in the daytime at all, however!

Opossums don’t actually sleep while playing dead, but they enter a state that can be described almost as a kind of paralysis. They’re still awake, but they just cannot move!

“Playing possum”, or more scientifically called catatonia, is a defensive mechanism for opossums. They enter this state of catatonia when they are threatened by common predators such as dogs and foxes.

When opossums are in a state of catatonia, they flop onto the ground either staring off into the distance or with their eyes closed. In this comatose-like state, their bodies become rigid and unresponsive.

It’s not just an act, either. Their bodies enter this catatonic state anywhere from a minute to as long as four to six hours. Not only that, but they also emit a malodorous substance that, usually, only dead animals give off to further ward off their attackers.

That said, playing dead isn’t as common a behavior as you might think. It’s actually mostly done by the young.