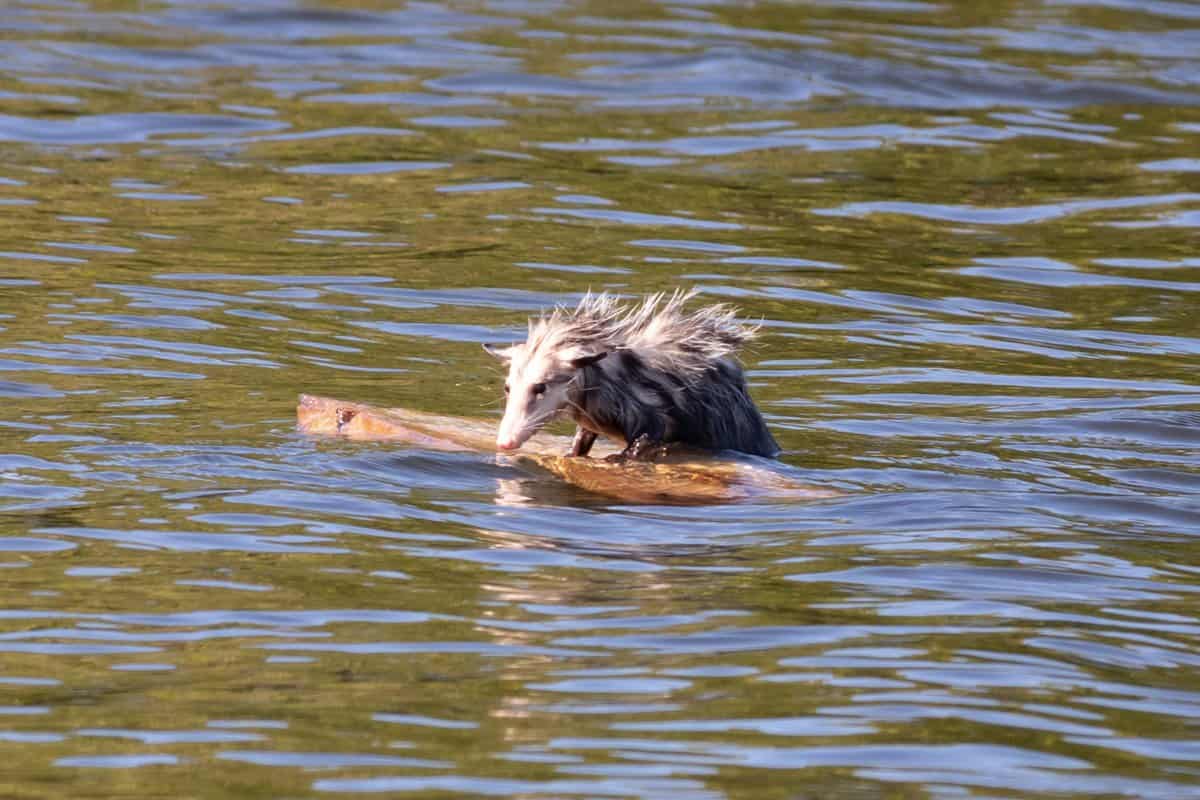 Opossums, or possums as some people call them, are marsupial animals endemic to America. There are around a hundred and twenty different species of opossum in the world, but the Virginia Opossum is the only one in the US. It’s North America’s only marsupial.

If you have a pool in your backyard, you might have already encountered an opossum swimming in it. It could also be that you have already rescued a drowning one.

With opossums frequently seen in pools or ponds, you might wonder if they are fond of swimming and if they are any good at it. And to satisfy your curiosity, join Floofmania as we dive into this subject, taking a deeper look at the swimming behavior of opossums.

Opossums are actually proficient at swimming. Although mostly tree and land dwellers, opossums are good swimmers with no fear of diving into the water. It can float, swim, and dive with relative ease.

Many accounts note that opossums can swim well both on the surface and underwater. However, it is also known that they are fonder of swimming underwater. They can swim and travel underwater for up to 15 feet.

What’s more interesting is that opossums can swim submerged with a pouch full of babies. The mother opossum closes her pouch so tightly during swimming so that water can not enter. It’s really fascinating that she can still swim fast even if she has her babies in her pouch.

Amazing, right? It might actually be that opossums are better swimmers than most of us.

How Do Opossums Swim?

Opossums engage in two different types of swimming. The first one, which is the most common, simply resembles how they move around on the ground! They move their four legs as if they were running, propelling them forward in the water.

The second way opossums swim is a bit more similar to that of a pacing horse. It will first move two legs on one side, then two legs on the other in a sort of synchronous movement.

When swimming, the opossum makes sculling movements with its tail. It moves from side to side like the rudder of a boat, which helps it to stabilize itself as well as move a bit faster.

What Is An Opossum’s Swimming Speed?

Opossums can swim half as fast as an average human swimmer can. As proficient swimmers, opossum’s swimming speed ranges from 0.19 to 0.46 m/s. Given this speed, the opossum can cover distances of 150 yards or more in 5-10 minutes.

When Will Opossums Swim?

If you’re a good swimmer, you most likely enjoy swimming as often as possible. However, that’s not the case for opossums.

Some people have also observed that there are instances when opossums swim into bodies of water, particularly in ponds, to catch fish to eat. So, if you notice the fish in your pond going missing, then it might be because of opossums.

Opossums are omnivorous, which means that they feed on both meat and plants. This is why fish is definitely included in an opossum’s diet.

As previously mentioned, opossums swim into bodies of water like ponds to catch fish for food. Using their decent swimming speed, opossums can go as far as pond fish go and catch them.

However, it is still important to remember that although opossums can catch fish on their own, they just normally wait for raccoons and other predators to finish their portions of fish before they feast on the leftovers!

Are Opossums Scared of Water or Getting Wet?

And although they seem to be aggressive, opossums are actually docile creatures that are easily scared of even the slightest movements from their environment. Thus, if you squirt water on them, they will perceive it as a threat which will prompt them to either run away or play dead.

Can Opossums Get Out of Ponds and Pools Themselves?

However, in pools with steep edges, or without a  ladder or anything else for the opossum to climb up, they won’t be able to get out.

Finding a drowned opossum in your pool can be a sad experience. You sure don’t want that, so you might as well provide an escape route to help them avoid drowning. Since steep edges are usually the problem, it’s better if you create a ramp or affix ropes around the edges of the pool at the surface of the water.

Can Opossums Swim In Low-Temperature Water?

How Do Opossums Clean Themselves? (Do They Bathe?)

Opossums may not seem to be sanitary animals at all because of their appearance and the odor they produce when threatened, but they are actually quite proficient in keeping themselves clean.

They do not bathe as a way of cleaning themselves. But like cats, opossums groom themselves by using their dexterous paws, tongue, and claws.

There are instances when opossums do take a bath. But it is only when they are owned as pets and are being bathed by their owners.