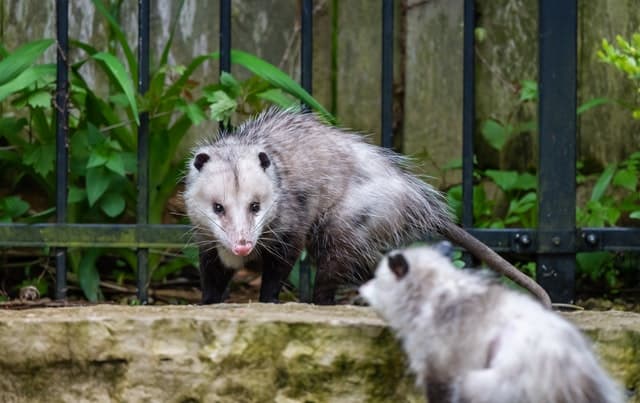 You may think that with their impressive fangs and massive tails, opossums must be fierce protectors of their territory. However, appearances betray the actual behavior of these clever and misunderstood marsupials.

Generally, opossums are not territorial, and they often share home ranges that overlap. Males may become aggressive during the mating season, and females will defend their young. However, opossums are transient mammals that are always on the move. And as such, they rarely fight for territory.

Below, this article dives into everything you want to know about opossums and their home ranges. By the end, you’ll be surprised at how well these solitary critters manage to get along.

Do Opossums Fight Over Territory?

Opossums very rarely fight over their territory and may even share it with other opossums. Males may occasionally battle with each other during the mating season. However, female opossums only get defensive over their den and young.

Despite their fearsome claws and fangs, opossums typically avoid fighting at all costs.

In fact, fighting is so stressful for the creatures that they often play dead! This involuntary response makes predators scratch their heads in confusion, giving opossums a chance to escape.

When male opossums do get territorial, they usually bark more than bite. Their aggressive displays include baring their teeth and hissing. If a fight breaks out, they scratch, bite, and cling to one another until one opossum retreats.

Do Opossums Mark Their Territories?

Opossums mark their territory using scent glands that they usually rub on trees and shrubs. Males, in particular, have a specialized sternal scent organ that produces a musky smell to attract mates.

Males mostly use their scents for mating purposes. And as they get older, they tend to become less territorial with markings.

In contrast, female opossums are much more likely to leave their scent. They generally do so by cutely rubbing their face into a surface and licking it. This behavior, called slubbing, is also how opossums demonstrate affection and trust.

Opossums also mark their territories through their urine. They often do so on the edges of their territory to ward off other opossums.

Do Opossums Have Territorial Calls?

You now know that opossums use smell to mark their home range. But do opossums have territorial calls, too?

While they may hiss in defense, opossums don’t indicate their territory with sound. Since these furry creatures are shy and rely on stealth, they rarely broadcast their location.

So when you notice a growl or howl in the night, chances are it’s a raccoon or coyote. If you ever hear an opossum, it’s likely because they’re rummaging in your garbage.

How Big Is An Opossum’s Territory?

Ordinarily, a male opossum’s territory is around 100 acres, while a female’s is about 50 acres. However, a male opossum’s home range size may double during the mating season. During this time, they roam more and can become territorial.

Keep in mind that these numbers vary quite a bit. Opossums in urban environments may only scavenge within a couple of acres. Meanwhile, those living in rural areas typically have more wiggle room.

The size of an opossum’s territory also depends on water access. These marsupials need a steady supply, rarely venturing more than half a mile from a water source.

Still, opossums aren’t too picky about where they roam. And since they’re excellent climbers and scavengers, they’ve adapted well to living around humans.

How Long Do Opossums Travel Each Night?

Considering the size of their territories, you might also wonder how long do opossums travel each night?

Typically, opossums spend the whole night scavenging and may cover up to two miles or more. And the more food that’s available, the less they need to move. When not walking, the critters also spend a lot of time climbing.

Where Do Opossums Den In Their Territory?

Opossums ordinarily seek dens in sheltered and dry places, such as hollowed trees and the crevices of rocks.

Despite their claws, opossums aren’t efficient diggers. However, they won’t hesitate to move into another animal’s burrow once they abandon it. Or under your crawl space if they can find a way in.

While opossums are comfortable sleeping underground, they prefer to stay above. Since they’re dexterous climbers, the critters spend much of their life in trees and often dwell in them.

This behavior is part of the reason why opossums aren’t territorial. Since they can den almost anywhere, they don’t need to fight over a random stump or crevice.

How Many Opossums Live In One Territory?

As many as 20 or more opossums can occupy the same square mile of land. Even though they’re solitary by nature, these critters tolerate each other well. Plus, their transient nature makes it unlikely for them to cross paths.

It’s pretty normal for many opossums to share a home range. While they don’t form a pack, they do an excellent job of avoiding conflict with one another. As we covered earlier, they usually only fight when males compete during breeding season.

The concentration of opossums also varies depending on the area.

They typically have more room to spread out in rural regions, populating them relatively sparsely. Meanwhile, suburban neighborhoods provide ample scavenging and hiding opportunities. As a result, they often have densely-packed populations.

Even then, opossums typically only spend time with other opossums during mating. Or when mothers raise their children.

How Long Do Opossums Stay In One Area?

Opossums are very transient creatures, often staying in an area for only two or three days.

While some animals will remain in an area for years, opossums always have the itch to travel. And since they’re scavengers, staying on the move is crucial for survival.

However, that isn’t to say these furry critters never settle down. Females commonly stay around their den for a couple of months when pregnant and raising their young. And during winter, opossums typically travel less and spend more time in their burrows.

Opossums are also opportunistic—meaning they’ll go wherever there is an easy source of food. So if your garbage is supplying them with plenty of snacks, they may stay longer as well.