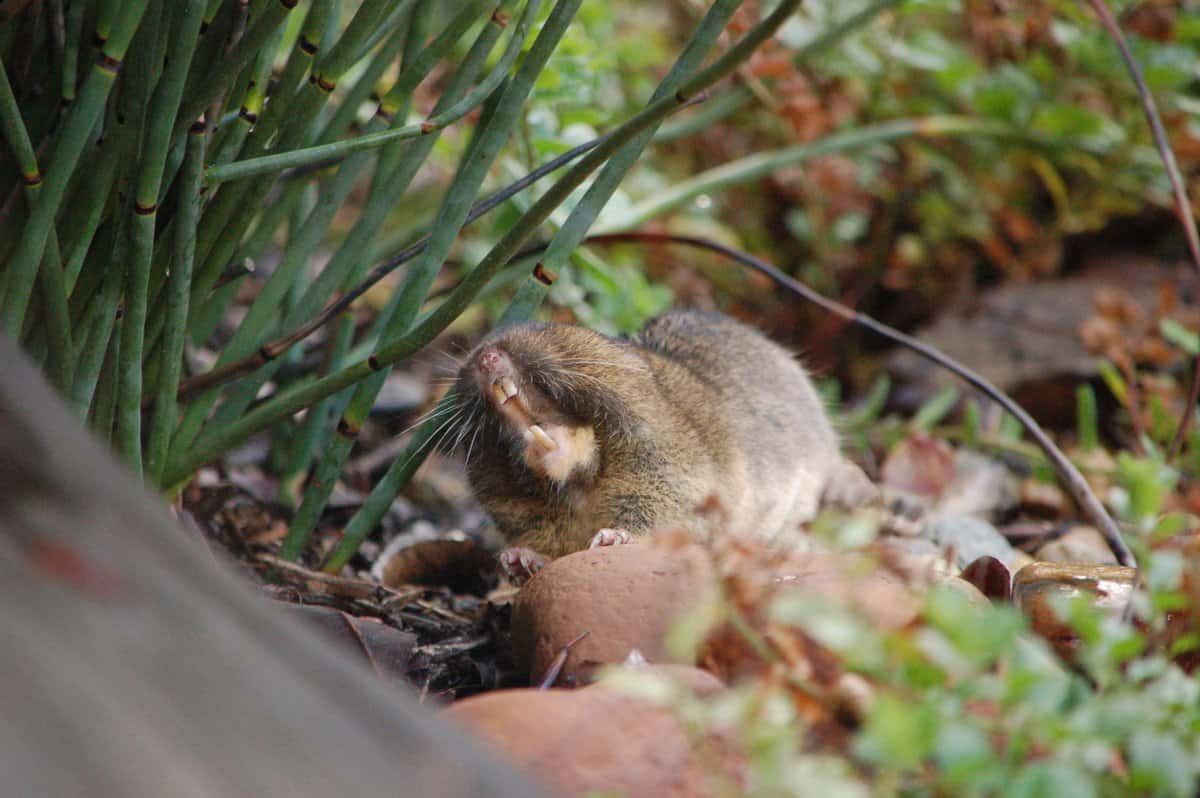 The pocket gophers (Geomys bursarius) are also known to many as gophers. They are fossorial creatures named after their spacious cheek pouches that they use to carry their favorite meal or materials to their burrows.

These medium-sized rodents spend most of their time digging a complex network of tunnels in the soils of North and Central America.

Gophers are solitary and territorial animals. Some of them live in open areas with few trees, others prefer densely wooded areas. The territories of these animals can be found in different types of habitats, such as savannas, grasslands, woodlands, forests, and suburbs.

Due to their territorial nature and preference for solitude, gophers tend to stay close in their own burrows and will only go out in search of food, and in the right season, a mate.

They are busily guarding and expanding their extensive tunnel system that can cover an area of up to 2,000 square feet (610 square meters).

Don’t worry about these furry rodents getting lost in their numerous dark tunnels; they know every nook and cranny of their territory thanks to their tail and whiskers.

Fun fact: It is common for gophers to travel through tunnels backward, using their four-inch tails as navigational aids.

How Do Gophers Defend Their Territory?

Even though gophers are solitary animals and are a one-man team, they will still do anything to defend their territory. They are aggressive and would not hesitate to use their sharp incisors and claws against a potential invader.

When facing predators or other gophers, they usually make threatening poses. They can also emit various sounds to warn the intruder to back off or to warn other gophers of possible danger (which is a theory on why gophers scream).

If the gopher knows it cannot defeat its predator, it will try and escape into its burrows and barricade itself by rapidly pushing the soil to block the predator’s advance.

Do Gophers Fight Other Gophers That Intrude Into Their Territory?

Although they’re not often seen, these underground critters are aggressive in defending their territories. In the same way, as other territorial species, female and male gophers tolerate overlapping territories but attack members of the same sex.

Unless the female is caring for her pups (baby gophers) or the breeding season is in full swing, gophers usually live alone within their burrow systems. That means, if other gophers intrude into their lovely home outside the breeding season, there is a high chance that they will fight them to chase them away.

These fights can be pretty fierce, and they will literally fight for their territory until their last breath.

Do Gophers Mark Their Territory?

These burrowing rodents are territorial that like to mark their turf with scent markings. And since gophers tend to be close to other gophers, these scent and waste deposits help them determine their neighbors’ perimeters to avoid any problems. We all want to have a friendly relationship with our neighbors, right?

Do Gophers Have Some Kind Of Territorial Call?

Gophers don’t really have a specific territorial call. They are usually silent but can make noises like squeaking, whistling, and screaming.

Pocket gophers can even produce a sound the human ears cannot pick up. Mind you, each and every sound they make has meaning, from showing aggression to having fear to warning their young.

How Big Is A Gopher Territory?

North and Central America hosts a variety of gopher species. Various underground habitats, such as crop fields, meadows, forests, etc., are available for them to thrive.

When it comes to the expansion and ideal territory for gophers, soil types and depths are crucial factors. They generally avoid building their burrows in shallow-depth soil, as they are more likely to cave in and may not provide the necessary structural support.

If we take a closer look at the scale of how big a gopher’s burrow is, we can see that the diameter of the burrows ranges from 2 ½ to 4 inches. It also changes depending on the body size of the gophers.

Feeding burrows are typically 6-12 inches underground, while the nesting and food storage chamber can reach depths of 6 feet. Surprisingly, their burrow networks can spread over an area of 200 to 2000 square feet.

Fun fact: A single gopher can expose approximately two tons of soil annually by building a hundred or more mounds (These are formed when the gophers are excavating their tunnels and pushing the dirt to the surface).

How Close Do Gophers Live Together?

The pocket gophers are animals that dig for a living, and their tunnels can extend hundreds of feet in every direction you can think of, meaning their territories can often overlap.

Gophers are solitary animals but are usually found near each other. An estimated 60 gophers per acre can live close to each other, especially if their place is full of their favorite food. And due to their territory’s closeness, they are able to find mates easily.

That said, you can probably expect many more gophers to live nearby if you have first seen one on your property.

When Do Gophers Venture Out Of Their Territory?

Because the pocket gopher spends almost its entire life underground in its tunnels, it is a rarely seen animal. Only the numerous mounds of dirt on the ground indicate where these critters are active.

During the breeding season, male gophers venture out of their territory to find mates. And pups (baby gophers) around six weeks old leave their mother’s burrows to establish their own territories.

Gophers rarely come to the surface unless they are tempted by something delicious to eat or need to get rid of a lot of dirt. It does not stray too far from the burrow’s opening, and if it is startled, it quickly runs back to its labyrinth of tunnels.