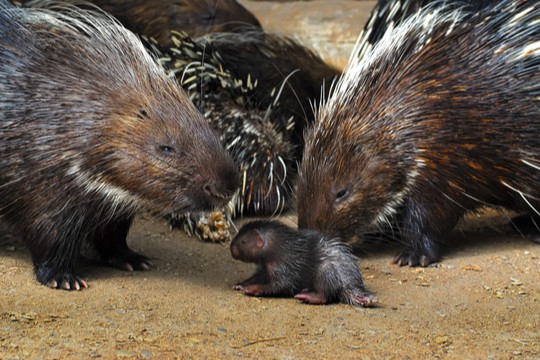 Porcupines mate once a year, each summer through fall. After a roughly 200 day gestation period, porcupines have one porcupine baby. Female porcupines raise their babies independently, without the help of their male partners.

How Do Porcupines Mate?

Porcupines mate in trees after courting a partner. The preferred tree is tall and slender, but it will vary depending on the region of the porcupine. Since this animal has a massive range, they can have many trees and environments.

How Do Porcupines Find A Mate?

Porcupines are monogamous animals who find their life-long partners by announcing mating calls and smelling for the female porcupine’s urine. According to the Center of Northern Woodlands Education, porcupines pair with mates through a courtship practice. They slowly form relationships where they progress over several days.

Common parts of the courtship practice include dancing, mating calls, and loving nudges of the noses from one porcupine to the other. It is a romantic experience where the male porcupine proves that he loves the female porcupine.

Male porcupines are willing to travel five times the range of what they would typically travel just to find a mate. Before mating, they live on their territory, far away from other porcupines. They will live in a family group on the same territory after mating. After the baby is born, the male may distance himself from the baby (the porcupette) and the female porcupine to create his own den elsewhere.

The male and female porcupines make loud mating calls while attracting mates. These sound like shrieks and sharp squawks. They also make shrills, grunts, and screeches.

In addition, males follow the female’s olfactory trail. She urinates and releases a special odor that attracts male porcupines in the area.

Porcupines become rivals with other males during mating season.  If they desire the same female, they will engage in physical duels. The last one standing at the end of the duel is the assumed winner of the female porcupine.

It is typically the larger male who usually wins the fight. But if the female porcupine is well-desired, male porcupines will compete for days no matter their strength.

While fighting each other, males use their incisor teeth and pointy spikes to impale each other. These intelligent animals fight strategically and will nudge, headbutt, and swing their tails to hurt their opponent. In many cases, the fights are fatal unless one porcupine backs down from the duel.

An uninterested female will shake or rub her body clean of the urine. They may also respond with battle chatter to signal they will attack. In that case, the male will leave to find another mate.

An interested female will squawk or squeal at her new mate. The two will rub noses, dance together, and chase each other. According to the Center of Northern Woodlands Education, the process may continue for several days.

Do Porcupines Mate For Life?

When a male and female establish a strong partnership, they will mate for the rest of their lives. The male and female will reunite on the female’s territory to repeat a mating process each mating season. The males are uninvolved in raising their baby porcupettes. However, these rodents are committed to their partners.

Porcupines make many noises while mating. The large rodent makes different noises before, during, and after the mating process. According to the Vermont Fish and Wildlife Department, porcupines will make a lot of whining, moaning, grunting, shrieking, and screaming noises while mating.

When Is Porcupine Mating Season?

The porcupine’s mating season is between late summer and early fall. Female porcupines are only fertile for between eight and twelve hours per year. During mating season, males compete over fertile females by courting female porcupines. Males may also combat other males for the attention of the female.

Porcupines only reproduce once per year. They are pregnant for seven months. At the end of the gestation period, the female porcupine live-births one baby porcupette. According to the Alaska Department of Fish and Game, the male porcupine is uninvolved in raising the newborn porcupine.

How Are Porcupettes Raised?

The newborn porcupettes go through a long gestation period. However, they mature quickly. It only takes six months for the porcupine to fully mature and a total of twenty-four months for both genders to become fully capable of reproducing.

How Do Porcupines Give Birth Without Getting Hurt or Hurting Their Young?

Porcupines give birth carefully to avoid hurting themselves or their newborn babies, called porcupettes. They face their padded tail with the downside up, so their sharp quills point toward the ground. They have a soft, padded surface underneath their tail, which is good for delivering their baby.

For additional protection from the sharp and spiky quills on their tails, the female porcupine creates a pallet with grass and leaves to deliver their young on safely. This pallet protects them from being pricked by any stray quills that might accidentally poke out from the sides.

Are Baby Porcupines Born With Quills?

Since their quills begin to harden quickly, the mother cleans the porcupette promptly to ensure they are clean before the quills harden. They do begin hardening within the hour. However, the quills do not fully harden into their full sharpness until a few days after birth. They will continue hardening in the following weeks as they grow.

How Many Porcupine Babies Are Born at A Time?

One porcupette is born at a time. The porcupine mother carries her baby for seven months before birthing the baby. At over 200 days, the porcupine has one of the longest gestation periods of any rodent.

What Are Baby Porcupines Called?

Baby porcupines are called porcupettes. In their first few days of life, the nurse from their mother. After that, they move onto a solid food diet of grass, which helps them grow into a full-sized porcupine within only six months.

How Do Porcupines Feed Their Young?

Mother porcupines will nurse their young for the first small amount of their life. The amount of time that the mother porcupine nurses her baby porcupettes vary between a few weeks to a few months, depending on how long the porcupine needs. She will continue producing milk until her baby is ready to dedicate their diet to solid foods.

The mother will also forage food for her baby and provide them with vegetation (mainly grass). After only a few days, once the baby’s eyes have opened, the baby emerges from the den and participates in the foraging process as best as it can. The mother teaches the porcupette how to forage.

When Do Young Porcupines Leave Their Mother?

Porcupine babies are ready to leave their mothers when they are six months old. By this time, they are experts in forging and are fully capable of surviving alone. They have already learned how to do basic tasks like climbing, digging, and more but typically stay longer to learn from their parents.

Although many porcupines can leave their parent porcupine at six months, many do not do so until one year old or more. At one year old, a porcupine can reproduce. Before then, they stay with their mother to learn from her. Their mother teaches them how to forage and if they are a female, she teaches her porcupette daughter how to give birth.

When Are Porcupines Ready To Have Their Own Babies?

It is common for a male and female porcupine to partner together who have not had mates previously.