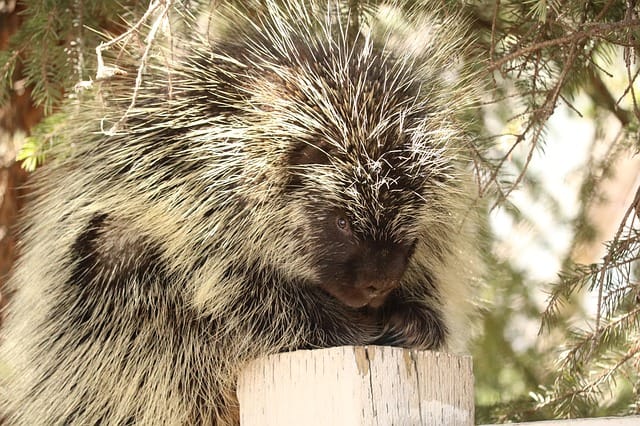 Many people believe that porcupines sound like humans as they make noises and that they even have the capability of learning the human language. The pitch and tone of the porcupine make many wildlife refuges and research centers investigate this abnormal creature.

The many human-like noises that the porcupine is capable of making are high-pitch and often resemble young children. The porcupine cries, coos, and whines like a young child which draws a lot of attention.

Porcupines are noisy animals that make many sounds to communicate with each other and scare predators. The sounds these rodents use vary based on their purpose for communication. Most noises that the porcupine makes are loud and high-pitched. In every case, the porcupine uses their vocalizations to communicate its vital needs.

Do Porcupines Communicate With Sounds?

Porcupines are highly vocal animals that use many sounds to communicate like grunts, teeth chattering, shrieks, and much more. Most of the sounds that porcupines use to communicate are vocal sounds, which include the grunts and crying noises that they use.

It is common for porcupines to make noises that are similar to high-pitch talking. Porcupines sound similar to people who are trying to speak after inhaling a mouth full of helium. Porcupines make short, high pitch vocalizations and these can be mistaken for babies crying too.

Porcupines often make sounds that are similar to birds. Their warbling noises and nighttime caws are similar to bird calls and they may emulate specific bird noises. Although bird watchers can distinguish the difference, many people mistake porcupines and birds on a daily basis.

Why Do Some Porcupines Sound Like They Are Talking?

Many of the sounds that porcupines make are similar to someone talking in a high-pitch voice. The tone and delivery of the porcupine squeaks and other noises resemble someone saying words. In addition to having a similar delivery to humans, zoological research suggests that this large rodent is also very intelligent.

Credible sources like Animal Wonders Montanna provide great insight into the porcupine’s intellectual capabilities. Caretakers at Animal Wonders Montana show that you can teach porcupines how to speak. At least, experience shows that if you say something to a porcupine, they will repeat the words back to you!

Do Porcupines Scream or Squeal?

Screaming is also common during mating season as a form of communication used by both male and female porcupines. As the pair begin to mate, they will progress into a siren-like mating scream. Both screaming and squealing are also used in various other situations, although the most common time that these noises are heard is during the summer mating season.

Porcupines sometimes make clicking noises since the movement of the porcupine’s teeth while they chatter resembles repetitive clicking. Porcupines make this noise, referred to as battle chatter when they are fearful of their safety and have become engaged in a battle.

The porcupine has thousands of quills, which are tucked inside of it most of the time. When these quills are released they can make a clicking sound against the items they pass.

The porcupine also uses grunting when they are engaged in battle. This is a vocalization that expresses their anger. Grunting is also a way that the porcupine shows they are angry with a predator or other porcupine as they engage in battle.

A porcupine in distress uses grunting and huffing noises to scare away predators. They do this after extending their quills and often run at their predator. The pitch of the porcupine’s vocalization will increase as the porcupine increases its defensive hold against the predator. Screeching and squealing is common for a distressed porcupine.

What Does It Sound Like When A Porcupine Is Fighting?

Porcupines make many special sounds when they are fighting like teeth chattering and screams. Teeth chattering is a warning to other animals that the porcupine will use its defensive shield if the animal gets too close.

In addition to chattering and clicking their teeth, a common noise that porcupines make while they are fighting is grunts and screams. Porcupines will do this to try and ward off predators. Their grunts are also a noise made when they are in clear distress.

Porcupines make crying sounds that are very similar to newborn babies. The crying noises will attract predators and even people before they are immediately pricked by the porcupine’s thousands of quills.

At night, porcupines can sound like crying babies. The cooing baby noises that these mammals make are the most common sound used to communicate. The crying nature of a porcupine typically happens when the porcupine is unsettled or upset.

Porcupines make some noises at night. It is common for porcupines to emulate a cawing bird or to chatter their teeth at night. Porcupines mate exclusively at night, meaning you should only expect to hear the mating calls of this rodent in the middle of the night or the early hours of the morning.

What Are Those Happy Sounds Porcupines Make While Eating? (Are They Fake?)

Porcupines make excited squeaking noises while eating that many people say are similar to human speech. In addition to making happy noises, porcupines love to run so they may exclaim their excitement. They will run while making their excited cooing noises, which makes the pitch of the happy noises even more exaggerated.

What Is The Porcupine Mating Call?

The male and female porcupines have a special mating call during mating season. Female porcupines use high-pitched shrieks to indicate interest in mating. According to the New Hampshire Wildlife Journal, a large quilled male makes noise to gain the female’s attention by stomping its feet and huffing.

If the female rejects the male, she will squeal to reject his advances. Otherwise, a series of squeals, shrieks, and screams may ensue as the pair mate. If there is competition between males, then there may also be teeth clicking and physical altercations involving high-pitch squeals.

How Do Porcupines Make Sounds?

Porcupines are intelligent animals who have a great way of mimicking other animals. They use their ability to repeat sounds.