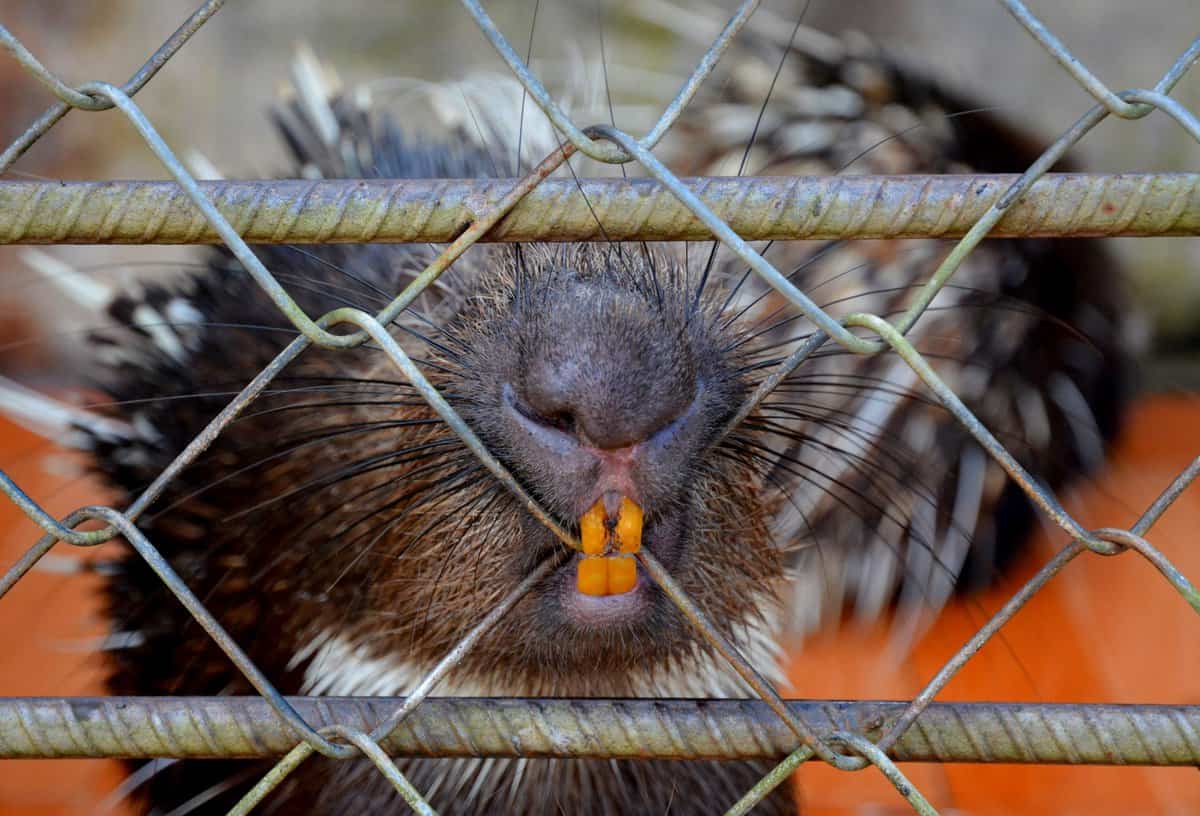 While porcupines are most well-known for their defensive quills, they’re still rodents, and like all rodents, they are great at gnawing. This naturally leads many to wonder about a porcupine’s teeth and jaw and what a porcupine uses its teeth for.

Porcupines use their teeth to eat tough materials like wooden stems and bark since these hard materials help file their ever-growing teeth down. Occasionally, a porcupine will also bite for protection.

Since porcupines are rodents, their jaw, bite, and teeth share a lot of similar qualities to other rodents, such as beavers or groundhogs. So, let’s take an in-depth look into the bite of a porcupine.

Do Porcupines Have Sharp Teeth?

Porcupine teeth look blunt, but the spiky critter actually has sharp teeth that are specially adapted for gnawing.

Generally, porcupines are able to maintain their sharp teeth because of their large chewing muscles that make their jaws move forward, backward, and vertically. This movement helps them sharpen their teeth the more they use them.

Why Do Porcupines’ Teeth Need To Be Sharp?

Porcupines need to have sharp teeth because they are rodents, and most of their lives rely heavily on the things that they gnaw on and chew through.

Porcupines also require sharp teeth because their two front incisors never stop growing. Their sharp teeth are used to gnaw bark, branches, bones, or other hard materials in order to grind their ever-growing incisors down.

Usually, rodents like porcupines may not make it in the wild if they break one of their sharp front teeth. In other words, having sharp teeth is key to the porcupine’s survival.

What Do Porcupines Use Their Teeth For?

Firstly, porcupines use their teeth to eat, often relying on a plant-heavy diet full of leaves, grass, berries, and seeds in the summer.

However, porcupines’ sharp teeth come in handy during the winter when the porcupine often eats the inner bark of ever-green needle-bearing trees.

Porcupines use their sharp front teeth to bite and tear into food while their back teeth and molars are used to grind and chew the food.

Moreover, porcupines use their teeth, along with their front paws, to excavate burrows for shelter underground.

Occasionally, porcupines will also resort to using their teeth for self-defense, especially if their quills are ignored by an especially desperate predator.

What Kind Of Teeth Do Porcupines Have?

Porcupines have teeth similar to other rodents. They have two large incisors on the upper and lower jaw.

They also have molars and premolars in each of their quadrants, which will be in the back of their mouths.

What makes porcupine teeth notable is that they feature a pronounced diastema, which means that there is a large gap between their front incisors and back teeth.

How Many Teeth Do Porcupines Have?

Porcupines have 20 teeth, which are composed of 4 incisors in the front of their jaws and 16 molars at the back of their jaws.

Usually, you can only see the four front teeth of porcupines, which are long, sharp-looking incisors that are distinctly orange. The porcupine’s 16 back molars, which are blunt, are hidden behind their cheeks.

Why Are Porcupine Teeth Orange?

Porcupines have orange teeth because their teeth’s enamel has iron oxide in them. While the iron causes the enamel to appear orange, the iron is crucial for keeping porcupine teeth strong.

Do Porcupines’ Teeth Continue To Grow?

Porcupine teeth do continue to grow throughout their entire lives, but only the two front teeth on their upper jaw.

This is why porcupines continuously gnaw on tougher foods, such as roots or the inner bark of trees, to keep their teeth from growing too long.

Generally, a baby porcupine’s two front teeth will grow a millimeter longer every two days until they fully develop. These teeth will then continue to grow at a slightly slower rate once they are adults.

Do Porcupines Grow Back Teeth If They Lose Them?

Porcupines do not grow back their teeth once they lose them since rodents only have one set of teeth with no replacement.

Instead, the porcupine’s two front teeth will keep growing to keep “newer” enamel present as the porcupine files off the older enamel.

Unfortunately, if a porcupine loses one of its front teeth, this can greatly affect its chances of survival since porcupines heavily rely on chewing.

Do Porcupines Have Canine Teeth?

Porcupines do not have canine teeth because there is a gap between their front and back teeth, which is where the canine teeth would have been.

Usually, canine teeth are meant for biting and tearing off chewier textures, such as meat. Porcupines, being strict herbivores, have no use for canine teeth.

Instead, porcupines focus on using their front incisors to gnaw through and chew hard foods instead of tearing the food.

Moreover, the gap where the canine teeth would have been allows porcupines to suck in their lips and cheeks to protect their mouths from flying chips while they chew! Interesting, right?

Do Porcupines Bite When Fighting?

Porcupines can bite while fighting, especially if they feel like they are being threatened.

Usually, the porcupine’s main line of defense is their pointy quills that would hurt a predator that tries to bite them.

Despite popular belief, porcupines do not shoot their quills when threatened, so porcupines would have to bite while fighting to defend themselves.

However, it is very unlikely that a porcupine will bite unprovoked, so it is rare to see them bite another living being. A porcupine is more likely to run away or make warning signs to avoid fighting.

As stated earlier, porcupines do not bite other beings unless they feel strongly threatened and have no success defending themselves with their quills. Instead, porcupines will click their teeth as a warning sign to predators.

Typically, the porcupines will chatter their teeth to make a clicking sound while producing a foul chemical odor. This makes the predator believe that they are more aggressive than they actually are.