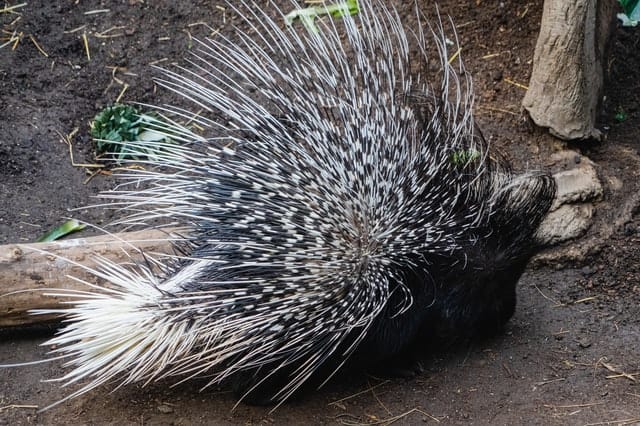 Few animals are as instantly recognizable as the North American porcupine. With their massive quills, these rodents boast one of nature’s most impressive defenses. Although, you might be surprised to learn it can’t protect them from everything.

The North American porcupine faces several dangers ranging from urban sprawl to predators. As a result, some conservationists believe porcupines may soon become endangered. Furthermore, their slow reproduction rate makes it difficult for populations to recover.

Below, this article dives into what hazards pose the biggest threat to these prickly creatures.

What Are The Primary Dangers To Porcupines?

It’s not surprising that the biggest threats to porcupines come from people.

Urban and suburban development leaves the creatures without homes. And living close to humans presents new challenges, like avoiding hunters and cars.

Furthermore, invasive bugs destroy many plants and trees that porcupines rely on—such as the eastern hemlock.

Here’s a rundown of some other dangers porcupines must navigate:

What Animals Prey On Porcupines?

The primary predators of porcupines are relatively small mammals called fishers. These animals avoid the protective spikes by attacking a porcupine’s face. However, other mammals such as wolves, coyotes, and cougars hunt the quilled creatures as well.

Despite those pesky sharp spikes, several animals hunt the porcupine.

Most do so by attacking their face since it lacks any protection. However, some animals get a little more creative.

Wolves, for example, use the superior numbers of the pack to their advantage. One wolf will distract the rodent, while another flips it over onto its back. Since the critters have no stomach spikes, this tactic leaves them vulnerable.

Below is a list of animals able to take on porcupines.

Naturally, you may also wonder where the spikey animals fall on the food chain:

Porcupines occupy a unique niche as herbivores near the top of the food chain. Only the toughest apex predators stand a chance against their formidable quills. However, porcupines themselves won’t hunt down other animals.

This one-of-a-kind status is primarily due to their spikes; no other animal in North America uses quills defensively.

As a result, virtually no predators have adapted to deal with porcupines. And even their biggest foes often walk away from fights with a face full of needles.

Although most animals don’t try to eat porcupines, the ones that do have developed all different kinds of strategies for doing so.

For instance, Mountain Lions have developed the strategy of simply ignoring the quills. Since they are much bigger animals, they can normally simply deal with the consequences of being pricked by porcupine quills. They will just power through the quills and overpower the porcupine.

On the contrary, Fishers have a more tactical approach. They attack porcupines from the front to avoid the tail quills. They then attempt to flip the porcupine onto its back so they can attack its belly, where there are no quills. As you can see, it takes quite a smart animal to deal with porcupine quills.

Similar to fishers, owls are able to attack the porcupine via the face, where there are fewer quills. However, unlike fishers, owls more than likely have the element of surprise on their side, as they love to swoop down from trees and pounce on unsuspecting prey. This is a really effective way to try to eat a porcupine!

Coyotes use the same tactic of flipping the porcupine onto its belly as well. This is especially effective if the coyote is hunting with a partner, which coyotes have been known to do. This way the porcupine can be surrounded and unable to escape, which makes it easier to pin it down and flip it over!

Are Porcupines In Danger From Dogs and Other Pets?

Generally, dogs and cats are not a threat to porcupines. Quite the opposite, dogs are often injured when trying to attack or play with these spikey rodents.

There’s no need to worry about your pup or kitty reducing local porcupine populations. Both animals pose little to no threat to the quilled creatures.

However, that doesn’t mean you shouldn’t worry about your dog instead!

Porcupines can leave dozens of spikes in the faces of pups who get too curious. And it’s a common reason dogs get admitted to the veterinarian in some regions.

So if you have porcupines near you, keep an eye on your pup. The quilled critters are rarely aggressive, but your pet might corner or threaten them.

In contrast, you’ll probably never need to worry about your house cat. They can’t get past the quills and are very unlikely to try.

Are Porcupines Prone To Diseases?

Porcupines can get numerous diseases, such as rabies, mange, and fungal infections. However, they’re not particularly prone or vulnerable to illness. Furthermore, their solitary lifestyle makes disease spread less likely.

While they can get sick like any other animal, porcupines are remarkably hardy animals. It takes more than a cold to keep them down!

Fungal infections are increasingly common among these rodents. But this is a recent phenomenon that seems to affect specific regions.

Beyond their robust health, another reason porcupines generally avoid illness is their lifestyle.

These rodents live entirely solitary lives outside of mating. They may hibernate in groups but generally don’t form lasting bonds. So disease spread between individuals occurs less often than with other animals.

Do Porcupines Lose Their Habitat To Humans?

Urban sprawl and rural development from humans have dramatically reduced North American porcupine habitats. Highways and roads, in particular, make it difficult for the animals to avoid human encroachment.

Sadly, porcupines have fewer and fewer options for where to live. And even when in the forest, they’re likely nearby a house or busy road.

While they’re not aggressive, the animals don’t get along well with humans. Our presence stresses them out, and our pet dogs can get hurt by their spines.

It doesn’t help that our roads often cut their territories in half. Meaning porcupines regularly have to roam across streets to forage.

If that wasn’t enough, many people also hunt these peaceful rodents.

Most do so out of necessity since the creatures can damage timber and trees. But regardless, the practice further reduces the places where porcupines can thrive.

Are Porcupines Often Hit By Cars?

Porcupines are hit by cars across the US at an alarming rate. In some rural areas of the Western US, they’re among the animals most commonly run over.

Since our roads cut through porcupine ranges, the rodents often need to cross busy streets. And it can be almost impossible for motorists to see them at night.

Another problem is their speed; porcupines move so slow, you’d think they don’t have a care in the world.

They’re usually never in a hurry since their quills deter faster predators. But when a car approaches, the poor little critters can’t do much to get out of the way.

As a result, some counties post wildlife crossing signs near their habitats. They serve as a warning to drivers and help protect the porcupines.