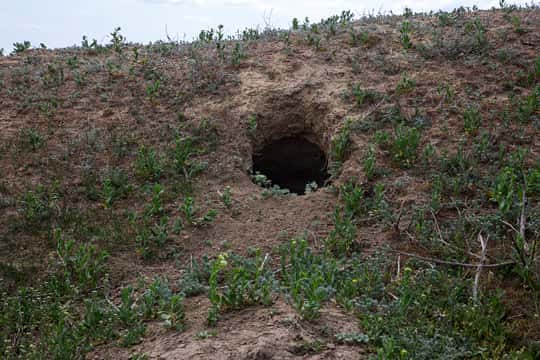 Porcupines are excellent diggers who rely on their sharp claws for making underground dens and scavenging food.  According to the Maine Department of Inland Fisheries and Wildlife, these mammals are herbivores and are experts at digging to find food underground. In most cases, the porcupine will establish a burrow and travel as little distance as possible from their den.

The remainder of this article will discuss porcupines digging, why they dig, and how to identify a porcupine den.

Are Porcupines Good At Digging?

Porcupines are great at digging. The porcupine relies on digging to make dens, retrieve underground food, and more. They are intelligent animals who know how to forage and create shelter. However, they would prefer not to.

According to MPALA Live, the Crested Porcupine is a nocturnal animal that steals burrows from other animals so they may sleep during the day. The porcupine would much rather steal a den from another animal than make one themselves when possible. They are excellent diggers who can create elaborate burrows. But, these mammals prefer to steal them from others.

Why Do Porcupines Dig?

Porcupines dig to fulfill their biological needs like eating and sleeping. In other words, they dig for safety, comfort, and necessity. The porcupines rely on the protection their underground burrows bring them and the food readily available under the ground’s surface.

The porcupine is an excellent digger that relies on what is beneath the ground’s surface for survival.

Porcupines dig to create dens, especially during summertime. Creating dens is critical for the survival of these small mammals because they are highly vulnerable to many large predators. Their pricky spikes are a deterrent. However, animals like the mountain lion, great horned owl, coyote, bobcat, and lynx love to feast on porcupines after mastering the art of avoiding quills.

Making dens allows the small mammal to hide out during the day to stay safe from these large predators.

The porcupine will also steal vacant dens. They will dig into these dens to adjust them and make them larger to accommodate their size.

Porcupines are motivated foragers who dig to find food, like herbs, fruit seeds, and sometimes insects. When you find evidence of a porcupine digging in your yard, they were probably digging for food. No food in your yard? The type of food they are digging for may vary.

According to the Maine Department of Inland Fisheries and Wildlife, these motivated foragers are herbivores. They enjoy eating all types of vegetation.

What Does a Porcupine Burrow or Den Look Like?

Porcupine dens are medium-sized dens around the same size as a rabbit den. The entrances are roughly one foot wide before slowly tapering.

Depending on whether they stole the burrow or not, there may be physical signs of the porcupine’s construction. Claw marks are sometimes visible along the sides of the entrance and walls from the porcupine digging their home.

You can identify the exterior of the porcupine den by looking for droppings and porcupine footprints. The porcupine is one of a few mammals that do not dig an underground latrine in their burrow. Instead, they go above ground to use the restroom.

Porcupine dens are underground cave systems dug by either the porcupine or another animal. The wild porcupine requires a large enough den to accommodate themselves throughout the day, whether they sleep or wake up temporarily.

The porcupine digs multiple tunnel systems for a rapid escape and at least one sleeping place. They dig the pathways to be twisting and intricate enough for them to get through and confuse predators. Porcupines skip the restroom and visit the surface to use the bathroom.

Every porcupine den has a different size and length. Mostly, this depends on gender. Every burrow occupies one porcupine. Naturally, male porcupines dig larger burrows for themselves since they are larger than females. When moving into a new den or stealing a den from an animal, the porcupine will be making adjustments as necessary by digging with their sharp nails.

According to MSPCA, the porcupine’s ideal locations are the forests and woodlands. The ground here is moist enough to dig, and it has plentiful resources in these areas for the porcupine. Porcupines will create their dens between rocks, hollow logs, and other crevices. Doing this hides the opening of their den’s hole and keeps them safer from dangerous predators.

Will a Porcupine Dig Holes In My Yard?

A porcupine can leave significant damage to your yard as they search for food under the surface of the ground. Many times, porcupines will dig up gardens to eat roots and vegetation. You can stop the porcupine from digging holes in your yard by placing fences up around the area the porcupine is digging.

Fencing around your yard or garden will prevent the porcupine from accessing the area to dig. It protects the inner area because the porcupine cannot dig around any part of the fence.

Can Porcupines Dig Under Fences?

Porcupines cannot dig underneath fences. Fences are a great way to prevent porcupines from invading your yard and digging holes. If you have a targeted area that porcupines are invading, install a fence around the area so the porcupine cannot dig into it.

If an initial installation did not work, add a layer of chicken wire deeper underground as a second layer of defense. Porcupines will try to dig through the chicken wire but will give up once they feel unable to get through. It is pointless for the porcupine to try something they cannot achieve. You may also want to check if the porcupine’s den is within your fence boundaries.