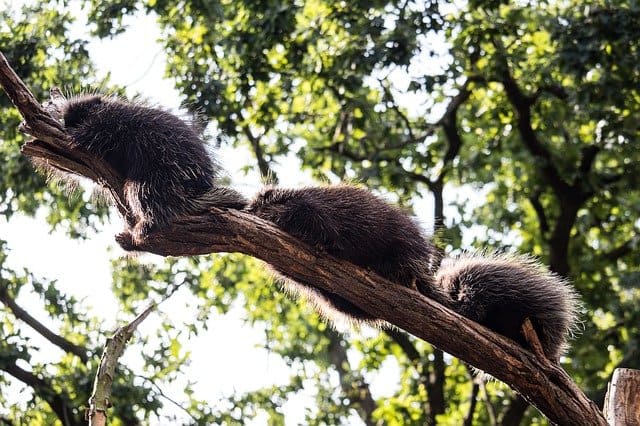 Porcupines are great at climbing trees but typically only do so when necessary. These semi-terrestrial animals prefer remaining grounded and building dens in rocky caves or self-made burrows. Porcupines love to sleep in caves and underneath rocky cliffs. However, sleeping in trees is often safer for the small mammal.

The porcupine might not prefer climbing trees, but it is safe to travel and find food while avoiding predators. Porcupines will roost and wait for predators to leave before returning to their regular sleeping locations.

Porcupines cause severe damage to trees, such as how they scrape the bark from trees or the way they will partially eat fruit. Fruit growing in trees is one of the many parts of the porcupine’s diet. They enjoy climbing trees and retrieving these fruits, but it can be problematic to the people who own these fruit trees when the fruits are half-eaten and rotting.

Porcupines are excellent climbers. They climb trees to escape predators, build nests, and search for food. Despite being great at climbing, the porcupine is a semi-terrestrial animal that prefers spending most of its time on the ground.

Why Do Porcupines Climb Trees?

Generally, there are three main reasons why porcupines climb trees. These terrestrial animals prefer to be on the ground, and they would rather spend their time nesting, eating, and hiding on the ground if they can.

If they cannot find places to do this on the ground, trees are a good place to find food, build nests, and escape predators. They are born to climb but do not start climbing until they grow curved claws a few weeks after birth.

Porcupines don’t climb trees just for fun. They are one of the continent’s most widely distributed herbivores. Depending on the season, they feed on tree bark, leaves, and needles as well as nuts, seeds, fruit, and their favorite tender leaf buds.

Their tree-climbing abilities are especially vital in the winter since their short legs and wide bodies make it difficult for them to move through the snow. Porcupines spend most of the winter high in the tree canopy munching on evergreen needles, bark, twigs, and buds.

A common reason that porcupines will climb trees is to evade terrestrial predators. These animals are slow-moving, so they cannot outrun a fast or cunning animal. To hide from large predators like wolves or coyotes, who know how to hunt the porcupine without hurting themselves, they will hide in trees.

The porcupine sleeps in several areas, which helps them stay protected from predators, warm, and dry. The sleeping arrangements will differ depending on the time of year, weather, and the number of porcupines in the group.

Porcupines sleep in trees by roosting. Roosting is a form of sleeping where the porcupine sleeps without a nest. There is no nest created from twigs and tree branches. Instead, porcupines sleep with their bodies attached tightly to the branches.

Porcupines will often make dens under rocky ledges or inside caves. Unlike in the trees, these areas are consistently dry and warm for the porcupine, which is good for the winter. Sleeping in dens is good after birthing new kits. It keeps them safer and warmer. Plus, kits have not mastered the art of roosting yet.

Burrows are appropriate during cold or inclement weather. Porcupines do not prefer underground burrows because of the inconvenience. However, they may use them after birthing new babies because they want to keep them warm and safe.

Are Porcupines Bad For Trees?

Porcupines can cause severe damage to trees, like girdling and partially eating fruit which causes the tree to rot. Without tree bark, trees are extremely vulnerable and will eventually die.

Porcupines cause girdling to the bottom of trees, which is very harmful. According to Utah State University, porcupines damage trees because they love to eat the phloem, the inner tree bark. Unfortunately, this means the porcupine must gnaw through the outer layer of tree bark to reach the inner center. After becoming accessible, this part of the tree faces exposure to the elements, insects, and animals.

Porcupines love fruit, but they will only partially eat them. When porcupines only partially eat the fruit, it will go rotten in the tree. Rotten fruit causes the tree to suffer, and it can potentially rot the tree too. Trees that do not have rotten fruit cut off can develop diseases. It may also attract larvae and other harmful insects that can cause severe damage to the tree, like rotting.

How To Stop Porcupines From Climbing Trees

The fencing does not need to be fancy. Get a chicken wire or another wire fencing at least two feet high and place it 360 degrees around your tree. In addition to stopping porcupines from climbing your trees, placing a fence around the base prevents the porcupine from doing damage to the base.

Are Porcupines Fast or Slow Runners?

Porcupines are slow-moving animals that do not run away from humans or predators. According to Live Science, the porcupine uses their more than 30,000 quills to inflict damage when defending itself against predators.

These very aggressive defense measures mean that the porcupine does not typically feel the need to run away from danger. Just because they do not feel in danger does not mean they will not attack. Their fearlessness is often the result of confidence since they know their quills will take care of them in a battle.

The porcupine is a semi-terrestrial animal that cannot jump. The muscles in their legs and the size of their legs make it impossible to propel their bodies forward. According to Encyclopedia Britannica, the porcupine moves too slowly to jump.

Porcupines spend part of their time in trees. However, the porcupine cannot jump between branches and must carefully and slowly crawl as it travels.