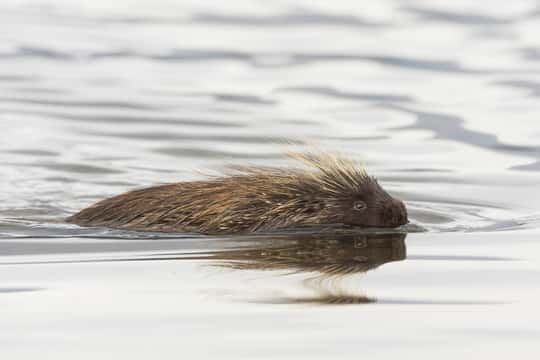 Porcupines are unique animals with varieties found around the world. The Native American porcupine is easily recognized by its hollow sharp quills that adorn its body. Porcupines are one of the largest animals in the rodent family found in North America.

Many people know that porcupines are gifted at climbing trees. They are well-adapted to survive in whatever their environment will throw at them.

It has also been observed that porcupines are great swimmers as well! Or at least – they’re good at staying afloat. This isn’t the case for every species of porcupine, but it is common for porcupines to be found in the water!

Are Porcupines Afraid of Water?

Porcupines are generally not afraid of water. They can float and swim and they will travel across water when they need to get to a new area.

Porcupines do not need to be afraid of water, because their quills are hollow and full of air. Their quills act as a life preserver, so they can float more easily on the water than other creatures can.

While porcupines are not afraid of water, they do not have much reason to go to large bodies of water. Most of their food is found on land, and they do not eat fish so they do not need to swim to forage for food.

Porcupines are comfortable in the water because their quills help them float. This body design makes porcupines able to swim without struggle, so they can move fairly quickly.

However, compared to many other animals, they do not have the benefit of design aimed at swimming. Their feet are not webbed. They mostly swim in a position similar to doggy paddling.

Porcupines do not have enough need to swim to make them head to the water for recreation or food, but when they need to swim to escape predators or move to a new area, they can get moving!

No! In fact, there are many porcupines all over the world, referred to sometimes as old-world porcupines,  that are not fond of water. However, most North American, or new-world species of porcupine, enjoy the water, using it as a place to find food.

How Do Porcupines Stay Afloat?

Every porcupine is covered in thousands of quills. Those quills are hollow and full of air. The quills help them stay afloat because they act like thousands of small lifejackets.

You can think of the porcupine quills acting like pool noodles. If you had ten thousand pool noodles attached to your back, you would float very easily. All you would need to do would be paddle to move. You would not need to worry about expending energy on kicking to stay afloat.

Can Porcupines Dive, Or Only Swim on The Surface?

Porcupines can dive under the water for short periods. They do not generally have much reason to do this, though, so it is not common to see a porcupine dive.

Since their quills help them float, porcupines are most comfortable in the water when they can float along the surface and swim above the surface of the water.

Why Do Porcupines Swim?

Porcupines mostly live in trees. They can eat trees and they are safe from many predators. This makes many people wonder why a porcupine would ever choose to swim rather than just walk from tree to tree.

Porcupines Look for Food in the Water

According to Zoo Idaho, porcupines are “generalists,” meaning they eat a little bit of all kinds of plant matter.

They do not commonly eat meat or fish, though. This diet means you are unlikely to see a porcupine swimming with the hopes of eating the catch of the day.

Sometimes, though, a porcupine may take a brief swim and drink water while it looks for other food to eat.

Porcupines Swim to Escape from Predators

Porcupines are lucky that they can swim so easily. It gives them yet another layer of protection against predators.

While their quills are an excellent defense and their treetop homes tend to be away from many predators, there may be a need for a porcupine to quickly get away from a predator that cannot swim.

Being able to jump into moving water and float also means they can use the current of the river to help them get away from predators more quickly.

Porcupines Swim to Cool Down

On a particularly hot day, a porcupine may cool down in a pool of water to help them avoid overheating.

In that way, porcupines are a lot like humans. They like a dip in the pool when the sun is especially hot overhead.

Porcupines need to travel to find food, locate mates, and escape from predators. Their ability to swim makes it possible for them to cover a larger area with ease.

If a porcupine comes across a river or a pond, it can swim across the river to reach the other side and find whatever food or mate it is seeking.

Do Porcupines Bathe in Water to Clean Themselves?

Porcupines do not go swimming to bathe themselves. They may end up cleaner after taking a dip while looking for food, but that is not their intention when they go for a swim.

Porcupines can develop a scent to help protect themselves and mark territory. Some describe it as a musty or sweaty smell. Others say it smells like cheese.

The porcupines are not bothered by this smell and they are not known for washing their food as raccoons do. So, porcupines do not need to take a bath.

How Do Porcupines Stay Clean?

Porcupines are not particularly concerned with staying clean. They may stay cleaner than other creatures because they can stay in trees instead of climbing through the mud.

People who own pet porcupines occasionally bathe their porcupines, but this is not a reflection of how porcupines live in nature.