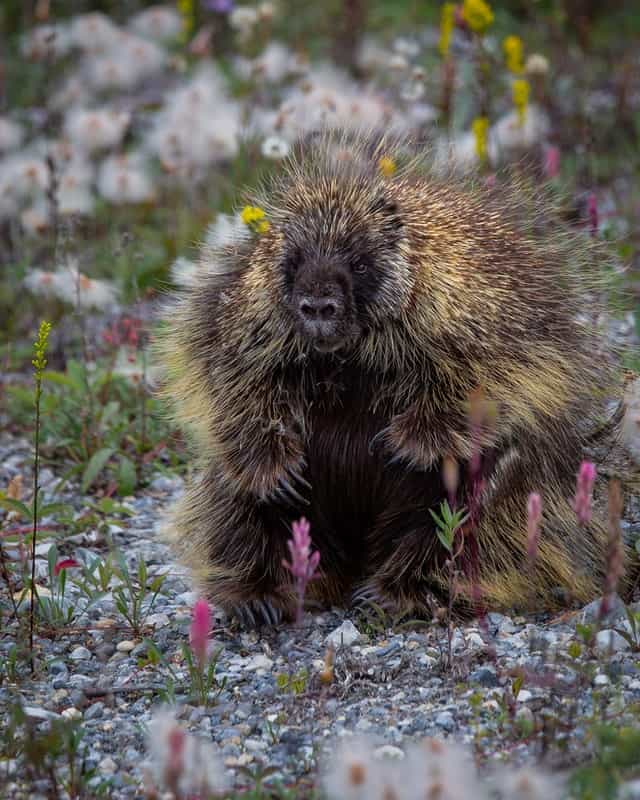 The porcupine’s range includes nearly every continent. Porcupines are classified by location. These classifications are called Old World and New World porcupines. Several differences exist between the two regional porcupine types, including sleeping preferences, den-making rituals, and more. Mainly, these differences are a result of the environment.

This article discusses where porcupines live. It also discusses the porcupine’s ideal climate, environment, and habitat. As well as which states and countries these pricky rodents live in.

Where Do Porcupines Live?

Porcupines live in two main regions called the Old and New World. These regions encompass all continents aside from Australia and Antarctica. The porcupines in these regions vary significantly, including their appearance and defense mechanisms.

The New World porcupine is a large, arboreal rodent that thrives in various habitats, especially habitats with many trees. The most common porcupine in the United States is the North American porcupine. This porcupine is known for climbing and perching in trees.

These porcupines are located in Mexico, Canada, and a large portion of the Western United States. They are among the most commonly recognized porcupines because of their long spikes and more recent discovery.

The North American porcupine is one of the most commonly seen porcupines known across the United States, Canada, and Mexico.

What Kind of Environment Do Porcupines Prefer?

New World porcupines use trees to do everything, including sleeping and much more.

The porcupine relies on weather changes, meaning an environment with transitioning seasons is ideal for the large rodent.

According to New Hampshire Public Broadcasting, grasslands, wooded areas, and forests provide the most support for porcupines compared to other environments. Making dens in these highly vegetated areas is ideal because foraging is easier. The accessible food during each season, especially in winter, is important for the porcupine.

What Type Of Habitat Do Porcupines Prefer?

The porcupines love places with trees and rocky terrain because it lets them roost and creates secretive dens they can escape to when the weather is bad. Porcupines create dens in fallen logs and rocky areas like cliffsides.

If they are not sleeping in coniferous trees, they may establish a den deep inside a crevice somewhere. The trees are also the best place for the porcupine to hang out.

An environment where they can dig a proper den can prevent porcupines from leaving their tree. The porcupine can make sufficient shelter in any climate. Still, it becomes most important during winter, porcupette-bearing season, or poor weather. As mentioned previously, desserts, tundra, and canyonlands are also great places for the porcupine.

The porcupine wants to create its den somewhere excluded from others so they can hide. Making a den underneath logs, brush, or fallen trees gives the porcupine a chance to evade predators. They can have a secretive entrance to their den. Porcupines can generally live anywhere dark and dry.

What Type of Climate Do Porcupines Prefer?

Porcupines enjoy all climates and prefer living in an environment where they can experience all types of weather. They enjoy the heat, so they are active in warm weather. Since porcupines dislike cold weather, the porcupine will burrow underground when it is cold.

Porcupines enjoy living in a seasonal environment. Most New World porcupines prefer a dry climate because they prefer to stay in their trees. However, the changing seasons might limit the food in these areas or cause other problems. In an unsupportive climate, the porcupine may struggle to make shelter and survive.

In Which of The U.S. States Can You Find Porcupines?

Nearly every state in the United States can sustain porcupines. According to New Hampshire Public Broadcasting, you can find porcupines in most of the western United States. You may also find the porcupine in parts of a few select middle and outlier states.

In Which States Can You Not Find A Porcupine?

You cannot find porcupines in warm, flat states with very little seasonal change. These rodents desire a seasonal change, and most states are not sustainable to the large rodent. They do not have den-space, trees, or the proper coverage required for the nocturnal forager. Therefore, the porcupine refrains from migrating to these areas.

It is possible to see porcupines in unpredictable states where you would not normally see them. Transient porcupines roam around the United States as they search for new territory. As their range expands, you will see them in more areas.

However, they limit themselves to climates with plentiful trees and vegetation, which is why you will not see them in dry places like Texas, California, Arizona, or Oklahoma.

Do Porcupines Live in Australia?

There are no porcupines in Australia. There are similar species called echidnas. These small, spiny mammals are called “spiny anteaters” because their long snouts resemble the anteater.

These are not considered porcupines because they belong to two separate families. However, the echidna has many similarities to the porcupine, such as its quills, spine, and diet.

Do Porcupines Live in Europe?

There are several other Old World porcupine species in Europe. The most concentrated area of porcupines in Southern Europe. The crested porcupine population is high in Itlay and many other South European countries.

Where Else In The World Can You Find Porcupines?

Porcupines are mostly limited to the areas they live. However, porcupines can be found elsewhere if they are motivated by food, territory, mating, or human intervention. Wild animals like the porcupine will wander recklessly searching for mates, because of injury, as a result of illness, or in fear.

Be cautious if you spot a porcupine. Call a humane animal protection service so a professional can relocate the animal to a forest, grassland, or another place to thrive.

Porcupines migrate every winter and summer after they have reached their appropriate maturity level. As territory becomes scarce for a nearby porcupine community, they may migrate onto nearby residential communities.

It is atypical behavior for porcupines to migrate to abnormal areas but is, unfortunately, becoming normal in areas where land is becoming less and less available to the wildlife.

Rehabilitation zoos and animal sanctuaries are great places to find porcupines. At animal sanctuaries, you may view porcupines at any time for the price of admission (or, in some cases, free). Sometimes, visiting the zoo to view a porcupine is the safest way to get close to this prickly rodent.