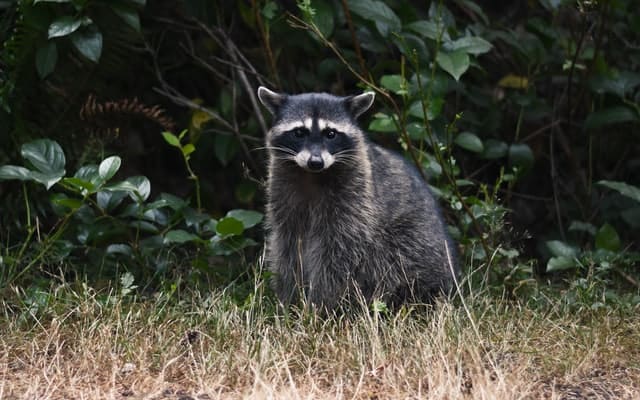 Did you see a raccoon recently and started wondering where they live? Raccoons are very adaptable animals, so they can easily live in areas populated by humans. These animals aren’t picky eaters, so they can survive on anything you throw away.

The raccoon’s habitat is widespread in the United States! You can find them mostly in woodland areas, although they can also live in areas with many people. Raccoons are very crafty creatures and can make their homes just about anywhere! You’re sure to see them often in your daily life as they like to scavenge for thrown-out food during the evenings.

What’s the Best Habitat for a Raccoon?

The best habitat for a raccoon is outside in the woods. They mostly hang out in trees, keeping themselves safe from other animals. Plus, raccoons won’t have to worry about the dangers of roads or being around people in the woods.

However, many raccoons today tend to live in areas with humans. These animals can also make their homes in other animals’ burrows, abandoned buildings, barns, rain drainage systems, and garages. They’ll avoid people, so you might not know they live nearby!

An urban area isn’t the best place for a raccoon to live. They’re much safer living in their natural habitat- moist woodlands. These forested areas have plenty of food and shelter for raccoons to thrive in. Plus, they evolved to live in these types of places.

During the day, you’re much less likely to see raccoons, as they’re nocturnal animals. They find shelter when the sun’s up and stay there until it goes down. Raccoons feel safer exploring their habitats during the night when it’s harder for people and predators to spot them.

Overall, the best habitat for a raccoon provides them with safety, a comfortable place to sleep, and reliable food sources. While this should be a woodland area, it’s not uncommon to see raccoons living closely with humans.

What Do Raccoons Depend On?

Raccoons depend on three main elements to thrive. These include food, water, shelter, and a terrain that suits them. If a raccoon can find a place to live that meets all these conditions, they’re likely to stay there unless they feel threatened by other animals.

Let’s break down everything that raccoons depend on to survive:

What Food Sources Raccoons Depend On

Raccoons are omnivores, which means they enjoy eating plants and meat alike. These animals will search for food during the night, often eating insects in their natural habitat. Raccoons eat all of the following:

However, raccoons aren’t picky eaters! If raccoons notice they have access to human food, they’re sure to eat it. Once they discover your garbage bin, they’re also sure to come back looking for another tasty treat the next night.

You might be surprised to hear that raccoons usually won’t touch spoiled food! They’ll avoid rotting garbage unless they haven’t had a meal in a very long time.

Suppose a raccoon lives in an urban area. In that case, they might have to eat garbage because their usual food sources aren’t available. It’s much easier for them to pick through your trash can instead of foraging, so they’ll often choose the easiest way to score a meal.

In short, raccoons eat a variety of food! They’ll only live in places where they have access to reliable food sources. If food runs out, the raccoons will move away, searching for another meal.

Sources of Water For Raccoons

Raccoons always choose to live close to water sources in their natural habitats. Fish and insects are abundant in these locations. Plus, raccoons love using water to groom themselves and douse their food.

Most often, raccoons choose to live near creeks, rivers, or lakes in woodlands. These bodies of water provide them with constant access to fresh drinking water and a reliable place to find a meal.

However, when raccoons encroach on urban areas, they need to find other water sources. Many will drink from water fountains, puddles, dog bowls, and birdbaths!

Overall, raccoons love water. They use it to moisten their food, which helps them identify what they’re eating. All animals need access to water- the raccoon isn’t an exception! You’re sure to find them living near natural water sources in the woods because of this.

Raccoons Need Shelters In Their Habitat

Raccoons also require safe living conditions to thrive. In their natural habitat, raccoons prefer to live in hollow trees. This type of shelter can be difficult for predators to get inside, protecting the raccoon.

However, raccoons also aren’t very picky about their shelters. As long as it’s a tightly enclosed space, the raccoon will feel safe. These animals are known to live in places abandoned by humans. Or even places like underneath your porch!

Raccoons want their shelter to feel as safe as possible during the day. They remain hidden until the evening when they leave to forage for food and get a drink. You could have a raccoon living under your home and not even know it! (Although they do make some sound at night!)

Raccoons can find shelter no matter where they happen to be. These include places like burrows, trees, and caves in their natural habitat. However, they can survive sleeping in dumpsters and other areas near people.

What Kind of Terrain Do Raccoons Prefer?

Raccoons prefer moist terrain since they rely heavily on natural water sources to groom and eat their food. They also want plenty of trees and brush for cover- making moist woodlands the kind of terrain that they prefer the most.

Even when raccoons live near people, they’re still very cautious of them and will try to stay out of our sight. So, if a raccoon makes its home in an urban area, it’ll seek out places with plenty of good hiding spots.

Raccoons will leave their natural habitat if it no longer provides them with the food, water, and shelter to feel comfortable and secure. While they prefer moist woodlands, they may move into areas with people if they find everything they need to survive there instead.