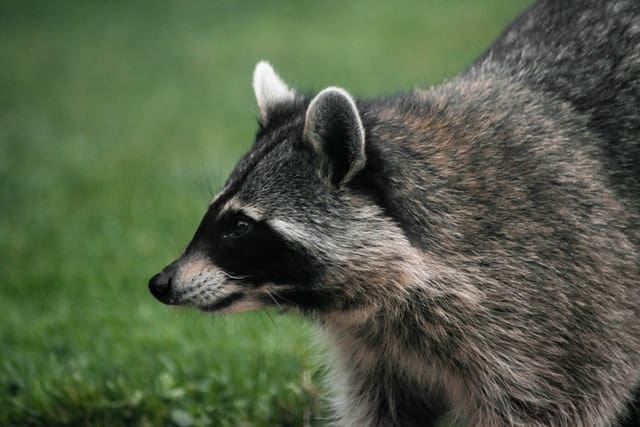 Raccoons typically live between two and five years when they are living in the wild. In captivity, raccoons are able to live almost twice as long. Raccoons face many threats and are preyed upon by larger predators, meaning their lifespan is much shorter than that of other animals.

In this article, we look in more depth at how long raccoons live, both in the wild and in captivity.

How Long Do Raccoons Live?

Typically, raccoons live between two and five years living in the wild. This is an average figure that considers the high number of raccoons who are lost to threats like traffic accidents and larger predators.

So, why do raccoons have such short lifespans? Unfortunately, most raccoons do not live long because of human interference. Raccoons are regularly involved in car accidents or are forced to suffer from their habitat being disrupted.

The threats to raccoons are unfortunately all too common for them to live very long.

Alongside the threats that come from humans in city areas and less dense forests, raccoons also have to face threats from other predators. Raccoons are often preyed upon by bigger animals like wolves, lynxes, coyotes, and bobcats, especially when they live in heavily forested areas.

It’s also important to think about the environmental impact on a raccoon’s lifespan. A lot of raccoons, especially babies, and younger raccoons, struggle in the winter especially. This can be a difficult time to forage for enough food to feed the whole family and finding somewhere safe and warm to sleep is also very hard.

Do Raccoons in Captivity Live Longer than Wild Raccoons?

Raccoons typically live a lot longer in captivity. While living in captivity, they have an average lifespan of between ten and fifteen years. This is a great deal longer than the two to five years they might survive in the wild.

There are a few reasons why a raccoon might live longer in captivity. The main reason is that they are offered some protection from the threats they face in the wild, many of which are the reasons why raccoons have a shorter lifespan. When kept in captivity, raccoons are less likely to face these threats.

Raccoons kept in captivity also have the advantage of having somewhere to live and find food without having to risk foraging or venturing out in cold weather. This gives them more protection from things like harsh winter weather, which can cause huge problems for a raccoon.

Female raccoons have the same average life expectancy as male raccoons, so it is unlikely that they would live any longer for any biological reason. However, female and male raccoons do live slightly differently from one another, which can affect how long they live.

Male raccoons den alone, meaning they live and nest alone, and usually forage for food by themselves. This means male raccoons are alone throughout the year in most cases, without the protection of a family or pack to hunt with.

The way they live can mean that male raccoons are left more vulnerable to threats and predators.

Females raise their babies alone and teach them to forage, and they can be very protective and prone to aggression during this time. Considering the threats raccoons face anyway, this can be particularly dangerous for females and their babies.

How to Improve a Raccoon’s Life Expectation?

As raccoons face so many threats from different sources, it is very hard to improve their life expectancy. However, there are some things you can do to help raccoons who might be living nearby to live as long as they can.

One thing you can do is make sure the raccoon has somewhere to live; without good cover from the weather and predators, a raccoon is more likely to die young.

Make sure to protect their environment as much as possible so they have the best chance. You might also want to encourage drivers to slow down, if possible, to avoid accidents.

You might be tempted to keep a raccoon as a pet when you hear how long they can live in captivity. However, it’s important to remember that they are wild animals and should be treated as such; people who keep raccoons in captivity often have to deal with volatile moods, aggression, and attempts to escape.

What’s the Oldest a Raccoon Can Get?

In captivity, raccoons can live up to the age of twenty, which is considered the oldest a raccoon can get. In the wild, a healthy raccoon might live to around ten, although this is considered a rare achievement.

Unfortunately, a healthy raccoon living in the wild would have to be able to outwit many predators and avoid a multitude of threats in order to make it to the age of ten. A more realistic maximum age for a raccoon in the wild is around five, but even this can be a difficult age to achieve.

The current record for the oldest raccoon is twenty-two years of age. The raccoon who made it to this age was raised in captivity, so was protected from the threats other raccoons face. Even so, making it to twenty-two is an impressive achievement, and something very few others are likely to achieve.

How Can You Tell the Age of A Raccoon?

Appearance is one of the best and easiest ways to tell the age of a raccoon. Differences in appearance are easiest to spot between young raccoons and older ones. Other things to look for are weight, length, and diet.

Baby raccoons are fairly easy to spot, mostly due to their size. Babies will be much smaller than older raccoons, and usually, have larger heads compared with their bodies. Raccoons are considered fully grown at around two months, which is when they leave their nest to begin to forage with their mothers.

Older raccoons are, of course, larger and weigh significantly more. They are also likely to be much longer than babies and will probably look more in proportion. In terms of appearance, older raccoons usually have slightly more defined rings on their tails and have more overall color.