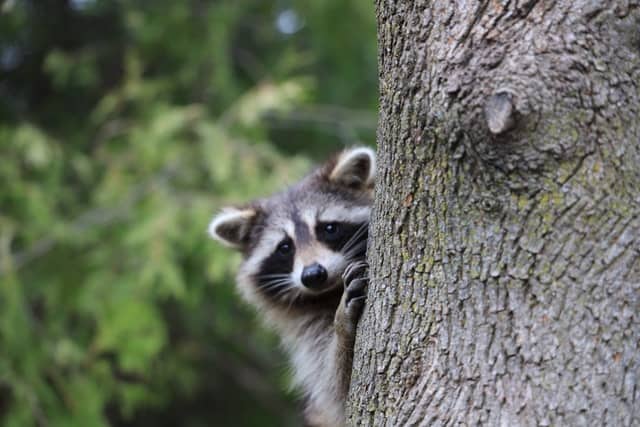 Raccoon poop is recognizable by its appearance and things inside the poop, like berries, grass, and bones. You can find raccoon droppings in concentrated areas, called latrines. These latrines help amplify the smell of the already smelly raccoon poop, helping with their territorial nature.

Droppings are long, dark-brown, and tubular. They appear similar to dog droppings and, in some cases, human feces because of their long, brown appearance.

Raccoon droppings can be dangerous to humans and pets, which is why you should avoid touching them. Luckily, there are safe ways to remove raccoon droppings and stop raccoons from pooping in your yard.

Raccoon poop is typically dark brown, but the color can vary based on the raccoon’s diet. There may be visible berries or seeds inside the poop in some cases because of what the raccoon eats. Depending on the number of berries the raccoon eats, their poop may appear more purple or colorful.

You may also identify other parts of the raccoon’s diet, such as bones and fur from rodents.

Other Animal Feces You Might Mistake For Raccoon Poop

The appearance of raccoon poop is very similar to other canines, like the coyote. Coyotes and raccoons can easily have their poop mistaken because of similar components, shapes, and sizes. They also have similar pooping habits, like being territorial with pooping by using latrines.

Do Raccoons Bury Their Poop?

Raccoons do not bury their poop as cats do. They like to do it in groups, and where it’s comfortable, and they’ll often come back and use the same place repeatedly. It’s called a “raccoon latrine” and you don’t want that in your garden or attic.

Do Raccoons Poop In The Same Place?

Raccoons will establish a latrine area where all members of a raccoon family use to mark their territory. Solitary raccoons will also establish latrine areas to help amplify the appearance of their numbers and make it seem like they have more raccoons living in the area than they do.

Typically, these latrines are relatively close to their dens. However, they are not close enough to give away their location to predators.

Why Do Raccoons Poop Together In Latrines?

Many wild animals have quite different defecating behavior than raccoons. When they feel like going, they simply do it on the spot.

Raccoons are much more organized, which is why they practice “communal defecation” in groups in specially-chose raccoon-latrines. Staying together in a group when carrying out their business means that they’re better protected from predators and intruders. They’re able to help each other keep a look-out in this not-so-private moment.

And raccoons also choose their designated latrines out of comfort. They’re generally places where they feel secure and comfortable. This part is not so different from us.

So your best bet for convincing your night-time visitors to take their business elsewhere is to make your yard/barn/attic seem much less welcoming.

Is Raccoon Poop Good Fertilizer For The Garden?

Gardens and raccoons do not mix. Raccoons will poop in vegetable gardens, but it can be dangerous if you consume vegetables that have come into contact with raccoon droppings.

It is okay for raccoons to poop in flower gardens because humans will not consume the flowers. In either case, you should never touch or remove raccoon poop without proper protective equipment.

Is Raccoon Poop Dangerous? (To Humans, Livestock, and Pets?)

Raccoon poop can be dangerous because of the many diseases and parasites that it carries. The contaminated host begins by ingesting the larvae and later developing the worms inside them. All mammals can be hosts to roundworms if they ingest the parasitic worm.

Racoon Poop Is Dangerous To Humans

Raccoon poop carries roundworm, which can contaminate your soil for many years. In addition to ruining your soil, raccoon poop can be dangerous to humans. Humans become contaminated by roundworms through the larvae. According to the Center for Disease Control, the worms will impact various human organs, causing them to shut down slowly before eventually shutting down entirely.

Racoon Poop Is Dangerous To Livestock

Raccoon poop is dangerous to livestock because of the diseases that it carries. Livestock may sniff or eat the livestock and then inherit the diseases from raccoons. One of the most common diseases that they inherit is roundworm. They may also inherit a variety of other parasites that farmers may not notice immediately.

Racoon Poop Is Dangerous To Pets

Pets will become easily interested in raccoon poop because of the smell of its components. Oddly, canines are drawn to the feces of other animals, especially when they have an upset stomach or an imbalance in their diet.

Domestic dogs are naturally attracted to the smell of wild canine species like the fox because of the identifiable scents.

If your pet eats raccoon poop while investigating the smell, it can be very dangerous to their health. Raccoon poop is full of parasites, virus, and bacteria. Prevent this from happening by keeping your pets away from raccoon-infested areas and removing raccoons from your property.

How To Clean Raccoon Poop

Avoid touching raccoon feces if you find it on your property. It can contain dangerous parasites and diseases that can harm you and your pets. Instead, you can remove it by hiring a professional or wearing proper safety equipment.

Always sanitize the area after removing raccoon droppings to guarantee that you have removed all roundworm larvae. Sanitization is especially important if raccoons have made a latrine area inside your home or in a garden area.

Use A Shovel To Remove Raccoon Poop

Typically, using a shovel is good when raccoons relieve themselves on your property in small numbers. You can follow this with a bucket of boiling water, which will remove the larvae. Shovels are also good for removing all the contaminated dirt in garden areas. This dirt is contaminated with infectious larvae from raccoon poop.

If you do not remove this contaminated dirt immediately, the larvae can spread into the growing plants.

You should never touch roundworms, or you risk the chance of contracting the parasite. If you must remove roundworms or roundworm larvae (or other harmful larvae living inside raccoon droppings), pour boiling water on the area to kill the larvae before removal.

You should pour boiling water over the entire latrine to remove all larvae. Do this before removal and another time after removal as a form of sanitization.

If you choose to hire a professional to remove the droppings, the professional will sanitize your home after finding and removing raccoon droppings. Depending on the service, they may also remove the raccoon from your property.

According to the Center for Disease Control, regular chemicals and cleaners like bleach will not kill roundworm eggs. If a family of raccoons has established a latrine on your property, you should avoid trying to sanitize the area with bleach. It will do nothing to benefit your sterilization process.

What To Do If Your Dog Eats Raccoon Poop?

Dogs who eat raccoon feces can contract the Baylisascariasis procyonis, also called roundworm. It is a zoonotic disease that can be spread through animals, including humans.

Never wait until symptoms begin to show from ingesting droppings and other dangerous foods. Dogs may not show signs of illness for several weeks when it comes to parasites. It can be too late for treatment when they begin showing symptoms, and the damage is irreversible. In some cases, the results are very dangerous.

How Can I Stop Raccoons From Pooping In My Yard?

You may purchase a hunting dog or a raccoon dog to keep intruding raccoons away. A trained dog knows how to keep raccoons away without getting bit or injured directly. They also know how close they can get to raccoons and know strategic hunting tactics.

A dog who relieves themselves outside on your property will keep raccoons away because they will exude a territorial scent that the raccoon will not want to combat. When your dog marks their territory with droppings, the raccoon will refrain from approaching your home.

Remove Their Latrine From Your Property

Hire A Wildlife Removal Specialist To Remove The Raccoon(s)

After removing the raccoon droppings from your property, hire a wildlife removal specialist to remove the raccoon. Home-dwelling raccoons will establish latrine sites primarily in roofing areas, including attics and haylofts. They may also make a latrine site under decks or in areas infrequently visited by the raccoon, away from their den.

Raccoons don’t have that smell of rotten eggs or sulfur that skunks are known for. They actually don’t have much of a smell at all. If you have ever had raccoons in your attic or near your house, you might however know that the animal tends to urinate and defecate everywhere, and that is extremely smelly, although different from a skunk’s defense spray.

While raccoons aren’t territorial, the males still mark the places where they’ve been. This is a kind of communication – a sort of calling card, which lets other raccoons know about their size, age, maturity, and favorite films. (OK, maybe not the last one). In other words, it’s a way of getting in contact with potential mates.

How Can I Get Rid Of The Bad Smell Left By Raccoons?

Raccoon feces and urine is no joke. It’s both disgusting and smelly. If you’re unlucky enough to have a raccoon leave his mark close to your living quarters, there are, however, many good tips online for getting rid of the smell.

It doesn’t necessarily take much, and getting rid of a raccoon’s urine smell is much easier than the disaster that a skunk might cause. I’d start by thoroughly cleaning up with any kind of household cleaning product. If the smell still lingers, try spraying on some un-diluted vinegar and rinse with clean water. Vinegar is natural and non-poisonous, and it’s great at removing smells.

Can Raccoons Be Potty Trained?

In principle, a raccoon can be potty trained. The raccoon is a smart mammal capable of learning new habits and even tricks just like other animals that people keep as pets.

With a wild raccoon, however, it’s unlikely that you’ll succeed in teaching it anything. You’d need constant access and control over the animal to be able to teach it to go to the bathroom in specific places, so a free-roaming raccoon probably won’t become potty trained.

Some people do keep raccoons as pets, but it’s a very exotic pet that’s difficult to take care of, and even illegal to keep without a permit in many states.