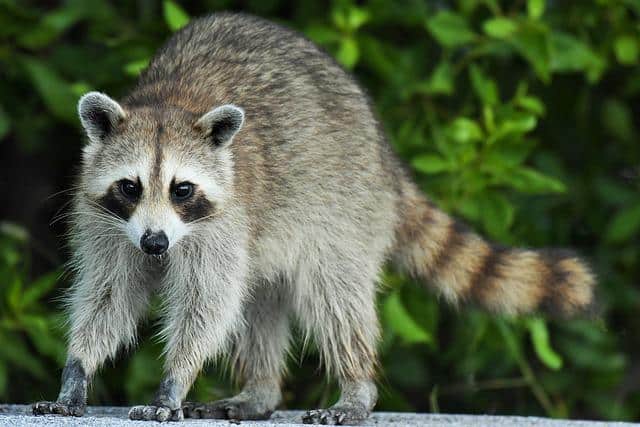 Raccoons live all throughout North America and in some parts of South America. In these areas, you can find raccoons all over. Whether you live in a city or deep in the woods, you will likely come across a raccoon at one point or another.

Even though raccoons are very adapted to different environments, they have many different predators. Coyotes, wolves, and certain large, predatory birds are all common predators of the raccoon. In fact, raccoons are even common prey for humans.

What Animals Prey On Raccoons?

A raccoon is a small mammal that is normally two to three feet long, including the tail. They are only medium-sized and weigh between 10 and 20 pounds. They are primarily recognized for their unique tail and masklike face.

Raccoons are mainly omnivores that eat a variety of eggs, fruits, nuts, rodents, and sometimes crawfish. They aren’t very picky, and they will eat whatever, whenever. So, don’t be shocked if you walk outside and find a raccoon going through your garbage bin.

Because raccoons are primarily foragers, they aren’t very predatory animals. They mainly will only prey on very small animals or eggs. In contrast, quite a few animals prey on raccoons in exchange.

Wild dogs, cats, and predatory birds are the sort of animals that prey on raccoons. Domesticated animals may get into fights with raccoons, but they don’t prey on them often.

What Animals Are The Raccoon’s Predators?

The exact predator of raccoons in your area will depend on where you live. Generally speaking, predatory, wild dogs, cats, and birds are the biggest predators of raccoons.

For example, coyotes and wolves are the main predators of raccoons in most areas. Sometimes, domesticated dogs can get ahold of raccoons too, but this isn’t as common.

Predatory birds will also make raccoons their prey. Owls, hawks, bald eagles, and other eagle species are all known to eat raccoons. In contrast, raccoons will sometimes eat bird eggs, but they generally do not attack adult birds.

Will Big Birds of Prey Scare Off Raccoons?

Big birds of prey frequently scare off raccoons. Because the raccoon is the prey of so many animals, this species has a very good sense of sound. If they hear birds of prey, raccoons will normally scuttle away for protection.

Raccoons are even known to run away from big birds of prey on sight. As a result, you can use a fake owl or a fake bird to keep raccoons away from your property. In order for this to work, you do have to change the location and select a fake bird that moves and creates sound.

How Do Raccoons Try To Stay Safe From Predators?

Animals tend to respond to different scenarios by either fighting or running away. If running away is an option, most raccoons will choose flight. Raccoons are known for being very skittish and will run away at the first sign of trouble.

Whenever they run away, they will try to find a safe place to hide. Some common locations where raccoons den includes hollow trees, burrows, piles of trash, abandoned buildings, or different crevices. If the raccoon has time to make it to its home, it will run there. If not, it will settle for any other shelter.

If the raccoon is backed in a corner and has no means of escape, raccoons will attack to defend themselves. Much like other animals, raccoons bite and scratch. Though a raccoon bite may not be fatal immediately, raccoons carry a lot of diseases that are fatal over time.

What Other Animals Are Raccoons Afraid Of?

The good news is that raccoons are unlikely to fight you or your pets, even though they’re probably afraid of you. Instead, raccoons will run away from your pets and you in most scenarios.

Occasionally, raccoons can get sick and become disoriented. If a raccoon walks up to you directly, that’s a sign that it has distemper. Make sure to keep your pets away from the raccoon if it is showing signs of distemper because it is contagious to dogs and cats.

In the case of distemper, the raccoon is unlikely to fight you, but it’s still a good idea to stay away.

What Animals Do Raccoons Compete With For Food Sources?

Opossums, badgers, and skunks are all examples of animals that compete with raccoons for food sources. Whenever these animals get into a scuttle, the results are often fatal unless one backs down. Most of the animals involved will bite and scratch as a way to get food.

Occasionally, cats and raccoons compete for food sources too. Feral cats, for example, will fight with raccoons over food, but they won’t kill the raccoon in most cases. Raccoons may steal food from domesticated cats, but most domesticated cats are not skilled or in shape enough to actually fight the raccoon.