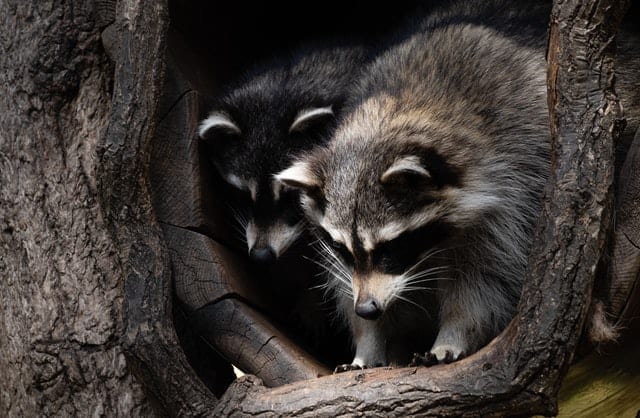 Even though raccoons can leave quite the mess in their wake, there’s no denying that they are cute animals that exhibit some fascinating behaviors. One also has to admire their ability to adapt to change, which has been crucial to their survival.

Raccoons are an interesting species, with many cousins and a history of evolution that has them being related to some animals that you would never expect, and some that boast a striking resemblance to the masked bandits.

Raccoons are known as part of the ringtail and the procyonidae family, and there are seven total species within this family. The name is fitting, given that raccoons have rings around their bushy tails, which is one of their most recognizable features.

Raccoons are also known for having short legs and arms, with hands that are pretty agile and skilled, featuring long fingers and sharp claws. Raccoons also have small ears and short noses and have black markings around their eyes that resemble a mask.

Raccoons are also typically a mixture of gray, brown, and black, with different types of raccoons having different distributions of color throughout their fur, as well as different consistencies in terms of their fur’s coarseness.

What Kind Of Animal Is A Raccoon?

Raccoons are mammals, but their scientific animal name is procyonidae. This family of animals is known to be fairly small with long tails, and are by and large classified as omnivores.

Other animals that are also classified as procyonidae are ringtails, olinguitos, kinkajous, olingos, coatis, and cacomistles.

All of these procyonidae belong to the order of carnivora, which includes other mammals such as dogs, weasels, bears, badgers, cats, and hyenas. These aren’t very close relatives, however.

What Is The Raccoon’s Closest Relative?

The closest relatives, which raccoons evolved from a very long time ago, would be the ring tailed cat or the cacomistle. The resemblance can be seen quite clearly when comparing each animal. Otherwise, there are some missing links in understanding all animals that raccoons might be related to, either closely or from a distance.

Raccoons are often misidentified as rodents, as many misunderstand that rodent is not a generic term for an animal that can be a nuisance, but is actually a specific classification of an animal. Racoons are placental mammals, meaning they are more closely related to bears, wolves, dogs, and cats than mice or squirrels.

Are Raccoons Closer To Cats or Dogs?

Many assume that raccoons are related to dogs, given that the procyon in their scientific name, procyon lotor, roughly translates to “before the dog.” They are related to both cats and dogs from a distance but would be considered closer to cats given some of their similar characteristics.

All three animals are part of the carnivora order, so they are all related to each other to a certain extent.

Are Raccoons Related To The Red Panda?

It used to be believed that raccoons were related to the red panda, being that the red panda was classified as part of the procyonidae family of animals for quite some time. There was never a consensus previously as to whether or not experts agreed on this classification.

As of now, red pandas are considered part of the ailuridae family, being closely related to the giant panda as opposed to the raccoon. There’s no doubt that some of the physical characteristics of a raccoon and a red panda are remarkably similar, however. This is just a happy coincidence, and there’s no scientific reason to explain the resemblance.

Is The Raccoon A Carnivore, Herbivore, or Omnivore?

Raccoons are omnivores and are known as having one of the most diverse diets of any animal. This has led to raccoons being able to not only survive but thrive, in multiple climates all over the world. They enjoy foods that are easy to forage or take the least amount of effort to acquire, which includes scavenging from other animals.

Raccoons will only really hunt if they need to, which will largely depend on where they live. They are happy eating vegetation, berries, fruits, and any leftovers they can find.

Some of the food sources that raccoons will occasionally hunt for include fish, frogs, crabs, insects, snakes, eggs, and sometimes small rodents such as squirrels, mice, and rats.

What’s The Raccoon’s Place In The Food Chain?

While raccoons are able to hunt and will do so when necessary, they are also scavengers. This means they will happily feast on any remains they might stumble upon, which is actually an important part of maintaining a healthy ecosystem.

Raccoons also eat many types of insects in the larvae and full forms, and they also eat smaller creatures such as small snakes, mice, and rats, which helps control those populations. Interestingly, raccoons also eat wasps, which is important to help protect other species of stinging insects and bees that our ecosystem desperately needs to survive.

Another important way raccoons contribute to the continuation of the food chain is through their redistribution of seeds through their waste back into the earth. Given that they also eat a lot of plant life, this is a nice way for raccoons to pay back the earth for what they eat.

Despite a raccoon’s somewhat accurate reputation for being destructive, as they can make a big mess without a care in the world, raccoons actually serve quite an important purpose in our food chain. They are also prey to larger mammals such as wolves and mountain lions, but their ability to climb, swim, and run doesn’t put them at much risk for population vulnerability due to predators.

Where Did The Raccoon Come From?

Raccoons are native to southern and central America and have been able to spread out all around North and South America over centuries. Raccoons will migrate if needed to find adequate food sources and shelter, though they don’t like to move far if they don’t need to.

How Did Raccoons Get To America?

Raccoons are native to parts of the Americas, but they have been able to spread themselves throughout most of the country partially through their own volition, but also through humans bringing them to their localities to hunt them for their fur.

How Did Raccoons Evolve?

Interestingly enough, there is some evidence to suggest that the raccoon’s oldest relative actually hailed from Europe millions and millions of years ago. They eventually migrated to the central and south Americas, enjoying the tropical atmosphere with ample food and shelter sources.

As raccoons continued to evolve and became stronger and more resilient, they were able to move into North America, where they are heavily concentrated as of now.

How Many Raccoons Are In The World?

There isn’t an exact figure known for just how many raccoons live throughout the world, though it would be fair to guess there are at least tens of millions. Raccoons are able to procreate yearly and aren’t under major threat of being eliminated by prey.

Considering how well raccoons have been able to acclimatize themselves to numerous environments they’ve either discovered or been introduced to, there’s no telling how far they’ll spread themselves in the future.

Two examples of their ability to bolster their populations quite quickly, even despite human intervention, would be Japan and Germany.

Germany brought raccoons to the country in the 1900s in an attempt to start a raccoon fur trade, as their pelts were in demand at that time. However, many of the raccoons kept captive managed to escape, spreading themselves throughout the country and beyond. Raccoons are now a common sight in Germany, much to the country’s dismay.

In Japan, there was a popular anime called Rascal the Raccoon in the 1970s that caused many Japanese folks to want a pet raccoon. Raccoons were imported to Japan for this purpose, but they didn’t stay domesticated for long. Today, raccoons still run rampant throughout Japan, causing some threat to their agriculture.

Obviously, they evolved in different ways though. Marsupials carry their babies in their pouch and raccoons do not do this. Instead, raccoons carry infants inside their bodies longer and feed them via a placenta in the same way human mothers do.

Are Raccoons Related To Bears?

Raccoons are not bears. However, they are relatively closely related. For a long while, people actually thought they were related to bears. As a result, in many languages, raccoons will share similar names to bears.

Both raccoons and bears are in the same order of species. This is the Carnivora. Any animal that is classified as a Carnivora is so-called because it lives primarily by eating meat. If you look at the skulls of both bears and raccoons, you will notice that they look incredibly similar. In fact, their entire body structure is similar.

At some point in the evolution of Carnivora, the animal group splits down into two distinct groups:

This all happened about 50-million years ago, so it certainly didn’t happen in recent history! Fossil records indicate that the first split of the animals took place somewhere in Europe. They then spread throughout the world from here. There are actually only two animals in the United States that fall under the category Procyonidae. You have the raccoon and the Coati (this is found in the southwest of the country).

While there are several differences between procyonidae and ursidae, the major difference is what they eat. When the groups split, the procyonidae became omnivorous (this means that they eat both meat and plants) and Ursidae remained strictly carnivorous. This means that raccoons, despite being able to eat flesh, are not adapted to it quite as well as actual bears would be.

Raccoons aren’t primates. Primates are a class of mammals that include monkeys and apes, which also means humans. Raccoons, on the other hand, belong to a class of animals called “procyonidae” which includes about 18 species of tree-climbing carnivores, such as the New World Ringtail, Coatis, and Olingos.

The raccoon, unlike most procyonids, Is, however, an omnivore, meaning that it doesn’t just eat meat. Procyonids are relatively closely related to bears, red pandas, and mustelids.

Primates and procyonids do have some things in common, and are, very remotely, related. A raccoon is much closer to a walrus, a hyena, cat, or dog, than to a primate. This is because the raccoon belongs to an order of mammals called carnivora, whereas primates, like us, belong to the order of euarchonta.

This means that primates, like us humans, are much more closely related to rabbits and mice than to raccoons. We’re actually closer to bats, elephants, and rhinos than we are to raccoons. But it’s not a lot!