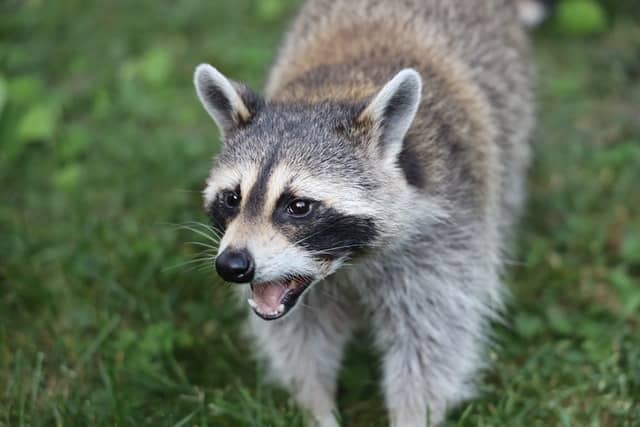 In spite of the raccoon’s small size, their sharp, utilitarian teeth and strong jaws give them a reputation as having a formidable bite.

In the rest of the article, we’re going to look at when raccoons bite, what to do if you get bitten by a raccoon, what the bite force quotient of raccoons is, and what kind of teeth they have, and how sharp and big their teeth are.

When Do Raccoons Bite?

Raccoons are rarely aggressive toward humans unprovoked. A healthy raccoon may be very defensive, however, if she feels that you are threatening her or her young, but this is unlikely to lead to pursuit.

A raccoon infected with the rabies virus may exhibit unprovoked aggression, so it’s important to recognize the signs.

If you notice what looks like aggression from a raccoon, including lunging, don’t worry – this is normal when they feel threatened. The animal might feel cornered, or you could be too close to a mama raccoon protecting her little family.

It’s safe to simply back away. You’re not going to get chased, and if you’ve been doing your cardio, you could probably outrun a raccoon anyway.

To identify a rabid raccoon, The Humane Society of the United States outlines a few things to look out for. These include but are not limited to a stagger, seemingly ignoring the environment, erratic movements, and wetness around the face, especially the eyes or mouth.

What Happens If A Raccoon Bites You?

If you get bitten by a raccoon, don’t panic, but take swift action. Wash the bite out thoroughly with soap and warm water for at least a few minutes to make sure that it is properly flushed out.

After this is done, seek medical attention. A doctor will be able to administer a preventative vaccine that will prepare your body to fight in the worst-case scenario.

Now that you’ve gotten the important stuff out of the way, take a deep breath and relax. The Center for Disease Control has record of only one human death caused by a rabid raccoon in America ever, so you’ll probably be fine.

What’s The Bite Force Of A Raccoon?

Remember that bite force quotients are calculated relative to the animal’s size. While a raccoon does have quite the impressive bite, you won’t end up worse off from a raccoon bite than a grizzly, but we’ll nonetheless recommend you try neither to test that theory out.

What Kind Of Teeth Do Raccoons Have?

According to Samuel Zeveloff, writing for the Smithsonian Institute, raccoons are “one of the world’s most omnivorous animals.” Because of this varied diet, raccoons have a full set of teeth, including incisors for ripping and cutting, canines for piercing, and premolars and molars for grinding and crushing food down.

The presence of the incisors and even more so the canines is what makes their bites potentially dangerous to humans since they have piercing power in addition to their brute jaw strength.

How Many Teeth Do Raccoons Have?

Raccoons have a total of 40 teeth, with a dental formula of 3.1.4.2 for both jaws. This means that each jaw has 6 incisors, the sharp, narrow teeth at the front; 2 canines, the long, sharp teeth at the corners; and 8 premolars and 4 molars, the wide, cuspy teeth at the backs of the jaws.

Do Raccoons Have Sharp Teeth?

Raccoons have both extremely sharp canines and incisors. This is to suit the part of their omnivorous diet that would normally fit into the niche of predators. In the case of raccoons, it also enhances their ability to be very good scavengers, earning them the endearing nickname, “trash pandas.”

A relatively shallow bite from a raccoon onto a person will usually leave four little puncture marks, two on each side, representing the canines. Deeper bites will show indentations from the incisors, but these are much rarer since healthy raccoons will tend to bite people defensively rather than for food.

How Big Are Raccoons’ Teeth?

The biggest teeth on raccoons are their canines. At their peak, they can approach an inch and a half in length. The incisors of raccoons are significantly smaller, with the overwhelming majority of their length sitting beneath the gumline. Only the tips of a raccoon’s incisors are visible, but this does not make them any less sharp or effective for what they’re built for.

Because of a raccoon’s very small size, the sizes of their teeth don’t appear intimidating but remember that when this is combined with their exceptional bite force quotient, a bite from a raccoon can pack quite a kick. Like dynamite, raccoons come in small packages but can be dangerous in the right situations.