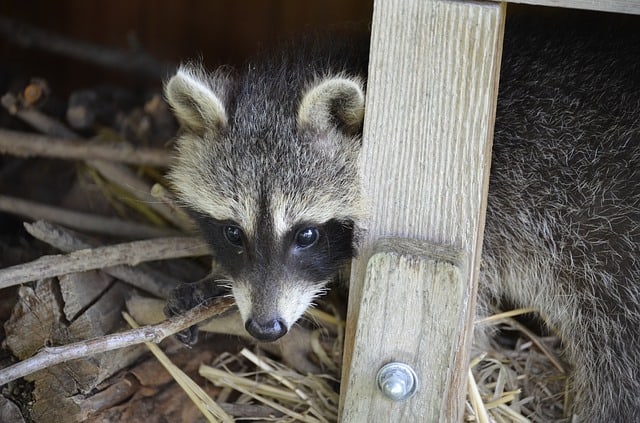 Raccoons have unique markings that make them look like tiny bandits. Those along with their human-like hands make them an interesting creatures. While a lot is known about the raccoon, there is some mystery surrounding their vision, leaving many to wonder just how good it is.

Though they use their hands an awful lot, raccoons have pretty good eyesight – at least in the dark.

Raccoons tend to hunt at night, which is why their eyesight is adapted to low-light conditions. They see very well up close and have the ability to distinguish color and distances.

If you’ve still got questions about raccoon’s eyes and vision, we’ve got the answers. Find out more about their eyes and why they appear a certain way in the dark below.

Do Raccoons See Well? (Are They Blind?)

Because raccoons use their hands a lot, many people think they are blind. However, raccoons have very good eyesight, though it’s not made for looking out over long distances.

Raccoons’ eyes tend to focus really highly on objects in front of them and don’t really adapt to work very far. (You might say they’re near-sighted).

Because raccoons are nocturnal, they see much better at night than in the day. Their eyes adapt to low light and very dark conditions which are not the best in the bright lights emitted by the sun. Though not blind, their daytime eyesight is not their strong suit.

The way that the raccoon’s eyes work means that they do not do well if they are out during the daytime.

Since raccoons cannot see objects that are far away, they tend not to head into open spaces. This is because they will be incredibly vulnerable when they are out there. They will not be able to see a predator coming toward them from a long distance.

If they do have to head into an open space for whatever reason, then it is likely that they will only do so during the night. This way they will have a small amount of extra protection.

Still, raccoons are pretty savvy, filled with tons of attributes that aid them in their survival. They use their hands to collect food and make their way from one buffet to another. On top of that, they tend to have problem-solving skills, able to get into some difficult-to-reach places when they’re looking for food.

Among their most advanced senses are their tactile and auditory, able to feel and hear better than they can see. Their eyes are not typically made to see far, which makes them a target to swift predators.

However, if raccoons feel in danger, they can scurry quickly and get out of sight in no time.

Why Do Raccoons Have Black Markings Around Their Eyes?

Raccoons are known for their signature markings. One of the most well-known is those around the eyes, which appear as black circles all the way around. Those who have studied raccoons often wonder where these marks came from, though it’s still not well known.

A few of the theories that are out there suggest that these markings developed as a visual aid, working to drown out light that’s coming close to the eyes. Other theories suggest that it may have something to do with a raccoon’s identity, working as markings that separate them from one another.

Because raccoons are nocturnal, their eyes tend to adjust to what’s in front of them and do not detect colors as easily as other animals. Though it’s not known for sure if raccoons are color blind, it’s suggested that they are not colorblind, but rather unable to distinguish colors as readily as others.

A raccoon’s eyes are important to its survival but not as important as its hands. Why their hands, you may ask? Here’s why.

Why A Raccoon’s Hands Are More Important Than Their Eyes

Just like all animals, raccoons rely on their senses for survival. They predominantly feed at night, which makes their hearing and touch stronger than other senses. While raccoons have many strong senses, their strongest is surprisingly their sense of touch.

Raccoons’ hands are filled with sensory receptors that make them one of their biggest assets. As they dig around in trashcans and feel along the ground, their hands act as their eyes, revealing what’s in front of them. It’s for this reason that raccoons are very touchy, always feeling around the ground for food.

Raccoons feed on a number of things, including fish, insects, garbage, fruits, and more. They like to indulge in anything that they can get their hands on, which is why their sensory receptors are so well adapted. They can scavenge for food on land and in water and are actually good swimmers.

While raccoons’ eyes may appear a certain color when light is reflected, they display a unique color in daylight, one that is not so easy to identify.

What Color Are A Raccoon’s Eyes?

Raccoons’ eyes appear dark purple and black in some light. When you see them up close, you might not be able to identify the exact color, as it’s a unique combination. When you really see them in the light, you’ll notice that their eyes give off a yellow tinge with a mix of orange.

It’s these colors that are behind the raccoon’s ability to see well at night. They also have a structure called tapetum lucidum within their eyes that reflects light, giving off a strange gleam when the light hits them just right.

This structure sits behind the eyeball and works to reflect light out. This structure appears in all nocturnal animals, giving them a strong night vision that they can use for hunting and more.

Each raccoon is different and sometimes their eye color can change based on their health or other factors. You may see some whose eyes flash red and others whose eyes flash blue or silver, all of which are completely normal.

The changes come about when light is reflected directly into the eye, causing a flash of light to transmit back. When you shine a flashlight or headlights on any nocturnal animal’s eyes, you’ll see the same sensation.

Anyone that lives near a wooded area, may come into contact with raccoons often. Whether they’re digging through trash or trying to make their way into just about anything, raccoons are a lively bunch that tends to have quick reactions.

One key sign of distemper is green eyes in raccoons, which could be a danger to them.

What is Distemper In Raccoons?

Distemper is a disease that is caused by a virus that typically infects animals such as raccoons, dogs, skunks, and ferrets. There is not so much known about the virus, and its patterns of appearance often leave scientists scratching their heads.

Distemper has been known to have large infection rates followed by a few years with few cases. One of the signs of distemper in raccoons is green eyes, though there are many others like:

If you suspect that a raccoon has distemper and would like to help, it’s best to call animal control or wildlife rescue. Though not fearful of humans when they display signs of distemper, they can still attack if they feel threatened.