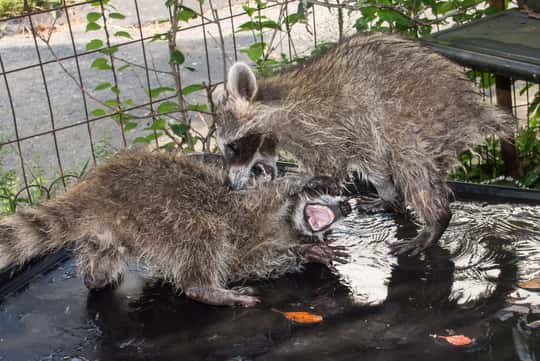 If you see a raccoon in your yard, you don’t have to be afraid. Raccoons are not known to be dangerous to human beings and are generally cautious when they see a person. While they may appear brave, there typically isn’t anything to worry about under normal circumstances.

Raccoons are a very common animal to see in residential neighborhoods and cities. They aren’t a threat, but that doesn’t mean you should approach them. If they feel threatened, they may become aggressive. Like any wild animal, they could bite you if you get too close.

Are you interested to learn more about raccoons and whether or not they are dangerous? You’ve come to the right page. Keep reading to learn more.

Raccoons are typically not dangerous animals. However, if they are provoked, they do have extraordinary strength in their claws and teeth. While you don’t have to hide inside your home if you see a raccoon outdoors, you should take caution.

Keep in mind, a raccoon is more afraid of you than you are of them. Humans can appear to be large predators to a raccoon, so they are known to run away in fear.

Are Raccoons Aggressive to Humans?

Sightings of raccoons are quite common in residential areas, so it’s not unheard of for a raccoon to be bustling around your property. If you were taking out the trash and notice a raccoon by the bin, it’s likely not going to become aggressive if you remain calm.

Raccoons are only known to become aggressive to humans if they feel threatened or if you have cornered them. If it does feel threatened, it will likely try to scare you off first with some huffs and grunts before becoming aggressive.

What To Do If A Raccoon Approaches You?

Some raccoons can be very bold and may approach humans. If this happens to you, it will be very difficult to tell if you’ve encountered a tame raccoon who is just curious or an aggressive raccoon with rabies. For this reason, it’s best to give the animal some space.

In this situation, you want to show the raccoon that you are bigger. Stand tall and wave your hands around, showing your size. If it gets too close, spray the raccoon with some water or start tossing sticks and stones around. Get loud by banging some pots and pans or using an airhorn.

This kind of behavior will make the raccoon think you’re the predator, and they should get scared off. However, if they aren’t scared off, you need to remove yourself from the situation by slowly backing away. Don’t hold eye contact while doing this.

Should I Be Scared of A Raccoon?

Raccoons do have some features that make them scary, and they know how to use them to cause damage when they are scared. However, for the most part, a raccoon will not use their claws or teeth on a human unless they have been provoked. While they are rabid animals, they won’t attack unless they feel there is a reason for it.

For this reason, you don’t need to fear raccoons. If you were outdoors and walked past a raccoon, there wouldn’t be the same dangers present as there would be if you were to walk past a coyote, wolf, or bear.

What Does It Mean If A Raccoon Stares At You?

If you’re taking out the trash and notice a raccoon by the bin that is staring directly at you, this can be creepy at first sight. However, you probably scared the raccoon just as much as it has startled you. The raccoon feels the possibility that you could be a predator, so their natural reaction is to freeze and stare.

What they are doing is trying to get a sense of what your next move is. This is more likely to happen in neighborhoods where the raccoon can easily find food.

If there are raccoon sightings in your area, it could present danger for curious children. There have been incidents where raccoons have attacked children. Always talk to your children about what to do when they see a raccoon so they don’t approach one and get hurt.

What Happens If A Raccoon Bites You?

Raccoon bites can be very dangerous, even if they look small. If a raccoon bites you, always seek medical attention immediately. There is a high chance that the raccoon could be carrying rabies or other life-threatening diseases. The same applies to raccoon scratches, as it’s easy for diseases to be transmitted.

Raccoons can be a threat because of all the diseases they carry. Rabies isn’t the only reason you need to be cautious of raccoons. There is also a chance they could have salmonella, leptospirosis, giardiasis, and baylisacaris procyonis.

Are Raccoons Dangerous To Dogs, Cats, and Household Pets?

If there have been raccoon sightings in your area, try to keep an eye on your pets while they are outdoors. A raccoon could hurt your cat or dog if they get into a fight.

Can Raccoons Be A Threat To Poultry or Livestock?

If you have livestock or poultry, then you need to be cautious of raccoons in the area. Raccoons are a very big threat to livestock and have been known to even attempt to get at them through the cage’s openings. This is because the livestock and the eggs are seen as food to the raccoons.

Young poultry is at a bigger risk because it’s easier for the raccoons to catch them. Raccoons are known to cause a lot of harm to these birds, so extra measures need to be taken to make sure they have safe shelter.