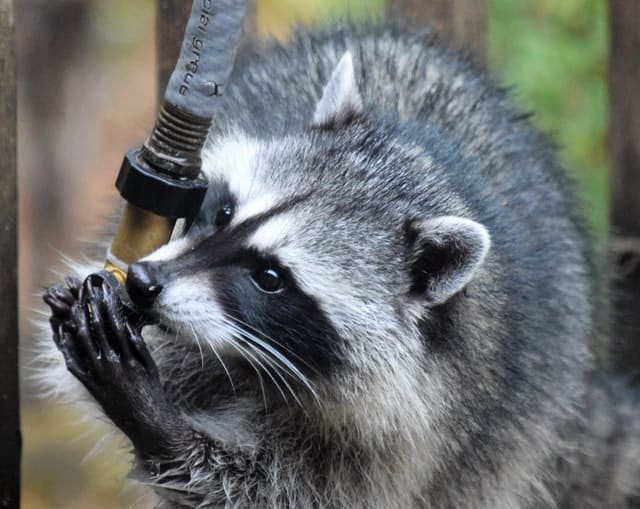 Whether you think of them as adorable little bandits or tricky pests that make a mess of your garbage, raccoons are undeniably one of America’s most iconic wild mammals. There are many things that make them fascinating creatures, but how much do you know about raccoons and their drinking behavior?

Whether you’re looking to provide wild raccoons with some support, trying to stop them from spending so much time on your property or just want to know more about how they live, this article is for you. Read on to find out everything you need to know about the drinking habits of these infamous American mammals.

Where Do Raccoons Get Water?

Like any mammals, raccoons need to drink water regularly in order to survive, but they are not too picky about where they get it from. In the wild, they will mainly drink from ponds, streams, rivers, and other easily accessible freshwater sources.

In many suburban areas across the United States, freshwater sources are limited or access to them is reduced for wild animals, so raccoons will often seek their water elsewhere. Open water sources on your property can draw raccoons from miles around, and not just naturally occurring water either.

Common water sources that will attract raccoons include:

If you are trying to reduce the number of raccoons that are turning up in your yard, consider removing or covering the freshwater that you have. A pool cover can be very useful, and you should make sure that your dog’s water bowl is empty if you are going to leave it out overnight.

Oddly enough, fewer mammals get sick from drinking contaminated water in the wild than you might expect. Though dirty water is a massive health risk to humans, most wild animals have developed a natural immunity to commonly found bacteria in their regular water supply.

Additionally, raccoons are intelligent enough to avoid risky water sources when they can, like stagnant pools of water that have a strange smell to them.

That is not to say that raccoons don’t get sick from the water that they drink. There are many parasites, bacteria, and viruses that raccoons commonly become infected with that can be found in contaminated water, like leptospirosis.

Pool water is usually not overly dangerous for wild raccoons to drink but it depends upon the level of chlorine present. Pool water that has too little chlorine can contain algae, parasites, and bacteria, whereas highly chlorinated water can cause gastrointestinal irritation.

How Much Water Do Raccoons Need?

Raccoons need to drink plenty of water in order to survive. In the wild, raccoons can only be found in areas where they have access to fresh water sources like ponds, marshes, and lakes.

If you are releasing raccoons into the wild, you need to make sure that there is a lot of fresh, clean water available in the area for them to drink from.

Sick raccoons and young raccoons can become dehydrated very quickly, which poses a serious threat to their health. Baby raccoons that are more than 8% dehydrated will be very weak, at 10% dehydration they will be semi-comatose, and anything more than that would mean that they are unlikely to survive.

How Long Can Raccoons Go Without Water?

During the winter months, raccoons spend more time in their dens and can go for weeks without eating. At this time, their water needs will be considerably less, but they still have to take on fluids to survive.

Contrary to the beliefs of some, raccoons don’t actually hibernate. Their activities are lessened over winter when there is not as much food available, but it is not considered “true” hibernation.

They instead enter a state known as torpor, where they expend as little energy as possible and spend long periods of time resting.

Is It Good To Leave Out Water For Raccoons?

If you leave water out for raccoons, they are going to appreciate it and it is likely to attract more to your property. Whether this is a good thing or not will depend on your preferences – and those of your neighbors.

If you are leaving water out for raccoons to drink, you should make sure that it is clean and fresh. If the water on your property is untreated and remains stagnant for too long, bacteria, algae, and parasites can build up which may be dangerous for a raccoon’s health.

If you want to deter raccoons from coming onto your land, then leaving water out is going to be very counter-productive. Raccoons love to drink, and they enjoy “dabbling” in water as well, so any water source can be a bit of a raccoon magnet.

Do Raccoons Drink Other Liquids?

There are a lot of things that raccoons can be accused of but being picky isn’t one of them. These little animals will eat pretty much anything they can get their hands on – they are omnivores with a very opportunistic diet. When it comes to drinking, however, they are much more likely to go for water than anything else.

Raccoons will drink other liquids, but freshwater is generally their preference. All raccoons are pretty curious and inquisitive by nature, though, so they are likely to give just about anything a try.

Can I Put Out Milk For My Neighborhood Raccoons?

Almost all baby mammals drink milk at the beginning of their lives but most adults will prefer to drink water. If you want to provide a drink for your neighborhood raccoons, freshwater is definitely the way to go.

Even though baby raccoons will not be able to drink it, freshwater will make sure that their mothers are well hydrated and able to feed their young safely.

If you are looking after an orphaned raccoon baby, they will need to drink a milk equivalent until they are around 8 – 10 weeks old, but they can’t just drink any milk. Cow’s milk is not suitable for a raccoon baby, instead, you can feed them kitten milk replacement formula (KMR), or Esbilac. If that is not available, baby formula or condensed milk might work in a pinch.