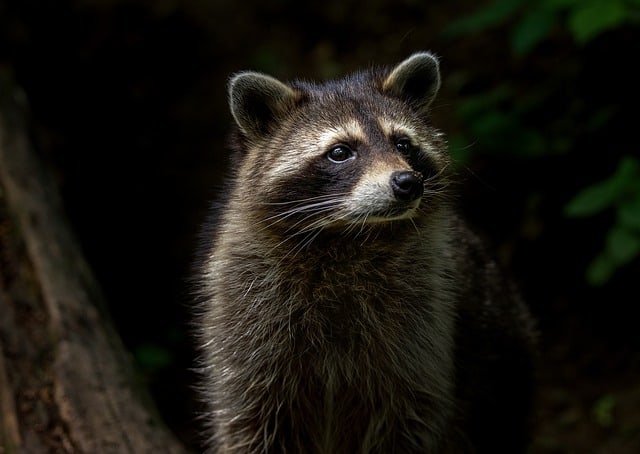 Raccoons are often associated with nocturnal activities and sneaky acts, and a large element of this is enabled by their superior hearing. Raccoons’ sense of hearing is formed by their unique niche as predators and prey and works both for and against them in the modern human-settled worlds they inhabit.

In the rest of the article, we’re going to learn about how well raccoons hear, whether they can hear you coming from far away, how sensitive to noise they are and what kinds of noises they hate, and what their ears look like.

Although raccoons are most famed for their incredible sense of touch, their second strongest sense is their hearing. Raccoons operate in an interesting ecological niche, where they are both natural predators and natural prey, so their ears have adapted to all sorts of elements of hearing.

The predatory elements of their hearing make them adept at picking up very subtle noises that may indicate that food is around. In the wild, this might translate to hearing earthworms that are moving underground.

A scenario that might be more relevant to you would be a raccoon hearing you open that tin of cat food that you always leave out on the porch for your furry friend.

The prey elements of their hearing make them sensitive to noises that may be dangerous to them. Before massive human expansion throughout North America, this would have meant keeping an ear out for large predators like bears, wolves, and cougars. In a modern settled area, these predatory threats may be replaced by humans and pet dogs.

Will Raccoons Hear You Coming From Far Away?

Raccoons can hear from a great distance, which is why it might be hard to catch them in the act of stealing from your property unless on camera. This hearing is honed from countless generations of avoiding larger predators that may harm them.

While it is true that there are plenty of examples of raccoons showing no fear toward people – and this is especially true of those in much more urbanized environments – the instinct for most raccoons would be to avoid human contact as much as is possible.

This can be beneficial for you since you might have disrupted raccoon operations on your land many times accidentally and without even knowing that it’s happened.

Are Raccoons Sensitive To Noise?

Raccoons have very sensitive hearing. This is beneficial for them in the wild both for finding food and for avoiding becoming other predators’ food. In a modern setting, you might find a raccoon reacting strongly to sharp noises such as radios, windchimes, and firecrackers.

Although firecrackers are not recommended for this, you can take advantage of this situation by adding a lot of passive noise-making devices to your property to act as a general deterrent to raccoons.

Be aware that they will get used to recurring noises, so if you want to be effective at this, you will have to mix them up regularly.

What Noises Do Raccoons Hate?

A lot of the predators that prey on raccoons have had their populations greatly reduced by human expansion. For raccoons living in or near human settlements, these reductions in numbers are even starker.

A study carried out by the University of Victoria in Canada found that dog vocalizations, even when broadcast over speakers, reduced raccoon activity by considerable amounts. Seal noises did not have the same effect.

If you want to get raccoons off your property and don’t have a dog, you could try playing dog noises over loudspeakers like in the Canadian study, or you could do something a lot simpler.

Raccoons can be quite skittish and making any sort of noise that might make them think that you, a human, is coming, will likely scare them off all the same.

Like many mammals, the external parts of raccoons’ ears sit on the top of their head, are roughly triangular in shape, and are covered in similar fur to that on the rest of their heads.

If you’re looking at their ears alone, it’s easy to confuse raccoons with a lot of other woodland critters. The shapes and the way that the fur is distributed are very similar to fox’s ears, though raccoon ears are proportionally smaller compared to foxes.

Of common domestic animals, the closest you can compare a raccoon’s ears to is a cat’s. In both cases, the shape of the triangles is roughly equilateral, and the ears sit perked upward, unlike many dog ears, which tend to flop down.