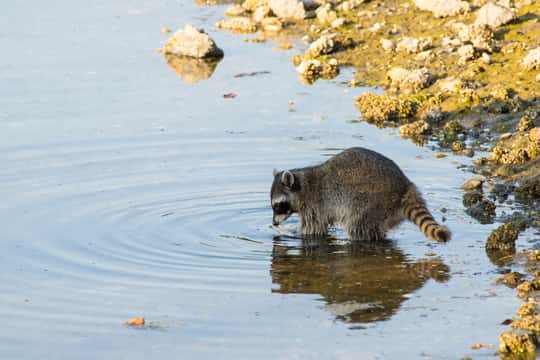 Raccoons have a varied diet, being opportunistic in their pursuit of food as much as possible. They don’t like to put a lot of energy into finding their food, but they are pretty resourceful hunters.

A raccoon will usually only hunt if they need to, as they are content with eating whatever they can forage from their surroundings. They aren’t super selective in what they eat.

Raccoons are very intelligent creatures, and they observe their potential prey to determine the easiest way to capture them. They are very good with their hands, and they have a very strong sense of touch.

The methods a raccoon uses to hunt, as well as how often they hunt, will depend on where they are living. If they are living in a city, they don’t need to hunt as much. They rely on scavenged food and food they can find elsewhere.

If they live in the wild, such as in a forest or a less populated area, they might have to rely more on their hunting skills to substitute what they can or cannot forage or scavenge.

Is The Raccoon A Predator or A Prey?

The raccoon could be considered both predator and prey. There are a plethora of animals that would consider a raccoon a food source, though predators don’t seem to have a detrimental effect on any raccoon populations.

Raccoons do eat other animals, and depending on where they live, they may or may not have an effect on the population of a particular creature. Raccoons are more likely to scavenge any remains than actively hunting unless that’s their only option for their next meal.

How Do Raccoons Hunt?

Raccoons are content enjoying leftovers that they can scavenge from another animal’s hunt or will eat foraged foods, small aquatic creatures, or bugs. However, if a raccoon needs to, they will hunt. They observe and pounce, and use their hands and teeth to cause as much damage as possible.

Do Raccoons Hunt In Packs?

A raccoon will venture out on its own in order to find food. They are not known to be pack animals, especially when they hunt. They can be territorial when it comes to their food and their sources of food.

It was believed that raccoons were solitary creatures, though there are some studies that would disprove that theory. However, they haven’t been witnessed to hunt with others, even though they might have social relationships with others.

When they do hunt something, they may eat alongside other raccoons, but they aren’t privy to sharing.

Do Raccoons Hunt At Night?

Raccoons are nocturnal creatures, so they prefer to hunt at night. Their eyesight is more enhanced when it’s dark. Their other senses, such as their sense of touch and smell, help guide them when they are hunting.

Can Raccoons Open Doors and Latches, and Break-In Through Holes?

A raccoon’s hands allow them to open doors and latches with ease. This is how they manage to get into garbage cans or animal enclosures with relative ease. This skill also allows them to get into homes, as they can break in through holes or small openings.

As a result, it’s highly discouraged to feed raccoons you see near your home, as they’ll associate your home with food. If you stop feeding them, they could decide to just break in and find the food themselves.

Can Raccoons Prey On Wild Birds?

Raccoons don’t gravitate towards hunting wild birds, but they are known to do so on occasions. Their usual target will be a smaller bird or a baby bird that is still in the nest and most likely can’t fly away. They are also happy grabbing up any eggs they find in the nest.

Do Raccoons Hunt Poultry Like Ducks, Chickens, Geese, and Turkeys?

If a raccoon stumbles upon a barn where poultry is living, they are more likely to steal food from these animals than hunt them. When faced with the choice, a raccoon will always choose the sustenance that requires the least amount of effort.

That being said, they are known for being pretty destructive to some poultry, especially if they are easy to access, being that some of these birds aren’t able to outsmart or overpower a raccoon.

Why Do Raccoons Rip Off Chicken’s Heads?

This is the easiest way a raccoon has found to help themselves to a chicken, as gruesome as it sounds. If a raccoon is not able to access a chicken, it’s possible they might just grab onto whatever their hands reach for first. That, unfortunately, might be the head.

Why Do Raccoons Take Down Chickens Without Eating?

It’s been observed that raccoons don’t necessarily like to travel with food unless they are bringing it home to their babies, so chances are they will eat what they can when they are near the chicken and then run.

It’s also suspected that raccoons don’t mind leaving their calling card, so to speak, meaning they’ll leave whatever they don’t want to eat for you to find.

Raccoons will not try to attack household pets as a potential food source regularly, though they do have the capacity to hunt them. Dogs would be more difficult for raccoons to hunt, and they would probably only attempt a younger puppy.

Chances are, a raccoon would not hunt a pet unless they were desperate for food. They would most likely go after any pet food left outside before going after your pet.

Raccoons also aren’t particularly fast, so they may not be able to keep up with your pet. However, if a raccoon were to catch your pet, it can be quite vicious.

Do Raccoons Prey On Rabbits, Squirrels, Rats, Mice, and Other Rodents?

Raccoons are somewhat prone to hunting small rodents, as they are fairly easy for a raccoon to catch. If a raccoon stumbles upon a rodent’s nest, they will opt for the young prey that is easier to catch instead of hunting around for a grown rodent.

Can A Raccoon Prey On Larger Animals Like Skunks, Badgers, Opossums, etc?

A raccoon will not usually prey on an animal they can’t outrun or overpower, so they won’t try to eat a larger animal. However, if they find one that is injured or has already been preyed upon, they might scavenge what they can.

A raccoon’s preferred area to establish a home is in a forested area with plenty of shelter near a water source. Thus, they often enjoy the plethora of aquatic life at their fingertips, including small fish, frogs, and clams.

They also enjoy other fish and amphibians that are somewhat small and easy to quickly grab out of the water. Raccoons are actually quite avid fishers, being that they can quickly grab something up with their hands before it has the opportunity to swim away.

Will A Raccoon Prey on Insects, Slugs, and Worms?

Raccoons will often eat insects that they find scurrying along the ground, including slugs and worms. These are easy foods for a raccoon to grab up without having to put in a lot of effort.