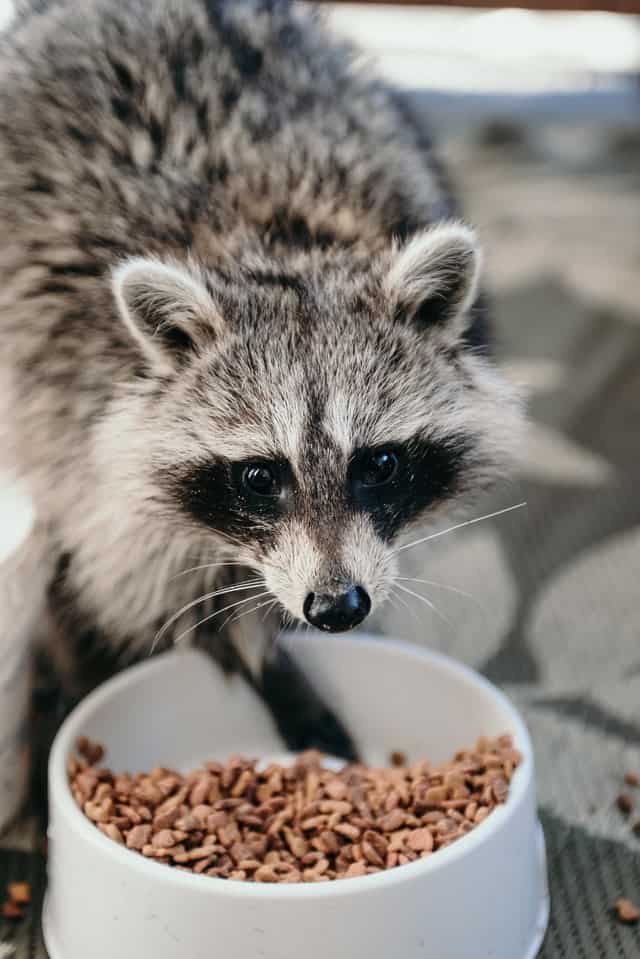 Raccoons are considered wild or exotic pets and do not typically make great pets because of their unpredictability. However, many people are beginning to tame them and move toward bringing these furry and affectionate mammals into their homes. Their cute appearances and cuddly personalities make them seem like the perfect pet.

You can legally own a raccoon as a pet in sixteen states. There are restrictions in some cases, like how states require licensure and permits for owning a raccoon. Some states also limit the number of raccoons and deem ownership of these animals as partially legal.

In most states, raccoons are considered wild animals. Taking them from their environment is cruel and is a major commitment. It costs significantly more to own raccoons than to own a domestic animal. So, you must be prepared to invest significant amounts of money if you intend on owning pet raccoons. Their diet, necessary environments, and medical attention are costly.

Can I Legally Have a Raccoon as A Pet in My State or Country?

You may legally own a raccoon as a pet in several states across America. Sixteen states allow you to own a raccoon legally. Most of these sixteen states have special permits or regulations for owning a raccoon, however, and raccoon ownership may still be considered illegal as a general rule.

The sixteen states which allow you to own raccoons legally include:

Each state has its regulations and rules for owning exotic or wild raccoons. Abiding by regulations may include obtaining licensure or something else to ensure the animal remains safe while in human captivity.

People in Arkansas may own up to six wild-caught or captive-born raccoons. According to the Arkansas Game and Fish Commission, you do not require a license to own up to six raccoons in captivity.

In the state of Delaware, Raccoons are considered wild animals that require a permit to own or rehabilitate. It is unlawful for anyone to shelter, breed, or raise raccoons without a permit. The state requires a vet evaluation and a rabies pre-exposure immunization.

There is no limit to the number of exotic or wild animals you can possess in Florida. In Florida, you must possess a Captive Wildlife License, which claims you can care for an exotic animal. The raccoon is a Class III animal.

Raccoons are considered a Class II Wild Animal and therefore require a Special Permit to Possess in Indiana. These permits withhold all types of animal ownership, including scientific, for circuses, education, selling, and more. A Game Breeder’s License is required for people breeding raccoons in Indiana.

To own a raccoon as a pet in Michigan, you must have one of several licenses to guarantee that you can care for a game animal. These permits include a Rehabilitation Permit, Permit to Hold Game in Captivity, or a Scientific Research Permit. The Rehabilitation Permit allows humans to house wild animals temporarily while rehabilitating them.

According to the Michigan Compiled Laws, raccoons can only undergo rehabilitation if you donate them to an AZA zoo, ASA, or animal sanctuary. You may also donate them to a science or educational research facility. In any case, they must be released into the same county they were found.

All organizations that accept animals must hold a Permit to Hold Game in Captivity, allowing them to rehabilitate the animal and return them safely to the wild.

Nebraska has partial bans on most exotic animals. They allow raccoons, with the exception that owners obtain a permit.

Interested parties must apply for licenses from the Director of the Oklahoma Department of Wildlife Conservation, who will observe your competency and capabilities of caring for wildlife.

Permits are awarded by a judge based on previous history and good faith. It costs $48 to obtain this license and $48 for each yearly renewal.

Pennsylvania regulates the ownership of raccoons. Before owning a pet raccoon, you must obtain a permit accompanied by two years of wildlife care experience. The wildlife facility you practiced both years at must be a registered organization.

Raccoons are fur-bearing animals that humans can trap during hunting season. After trapping, you can legally make these mammals into pets. The South Carolina law can investigate whether they should leave the animal in the person’s care.

Texas considers raccoons as wild animals, and they are illegal to possess without approved permits from the U.S. Department of Fish and Game.

Even though there are circumstances where it’s legal to own raccoons in Texas, they’re not considered pets.

In order to legally possess, transport, raise, or release raccoons in Texas, you have to be a permitted wildlife rehabber, and furthermore, if you intend to keep the animal in your possession, you need permission from the state with a vet that confirming that the raccoon is non-releasable.

(A thank you to Randy, @racc.dad on Instagram, who is a Texas wildlife rehabilitator, for reaching out with this information.)

In West Virginia, there are no restrictions on private exotic pet ownership. You do not need to apply or have a permit to own a raccoon in West Virginia.

According to Wisconsin Watch, no laws regulate private pet ownership in Wisconsin.

Raccoons are considered exotic animals in Wyoming, and they require a permit for private ownership. These permits are either non-game wildlife, educational/scientific, or wildlife rehabilitation.

Why Could Raccoons Make Good Pets?

Raccoons make great pets for several reasons, like their lively personalities and how easy they are to care for. People like these animals because they are similar to their house pets now.

Raccoons are affectionate, and they love to cuddle. Plus, they have established latrine areas, which means they are already litterbox trained.

They love to show their human companions attention by sitting on their laps, cuddling at the ends of their beds, and getting belly rubs. In many ways, the pet raccoon acts similarly to house dogs.

The affectionate pet raccoon will sit on your shoulder. Riding or sitting on your shoulder is one of the most enjoyable things this animal does to show its affection. They are quick learners who will catch on to this behavior in no time.

A raccoon can make a great pet because of its playful nature. They are agile, and they love to play with humans.

Despite being nocturnal animals, pet raccoons will come out to play with their owners during the daytime. Being active during the daytime is part of their domesticated behavior, which humans cannot teach to wild raccoons.

Viral videos of raccoons learning to do unique tricks or playing with dog toys surface on the internet. These exciting behaviors are common for the playful raccoon.

Raccoons Are Easy To Care For

Raccoons are easy to take care of. For instance, raccoons are relatively clean mammals. They naturally establish latrine sites, making it easy to create animal pins with concentrated mess areas. They have an expansive diet, and they are not picky eaters. For instance, you can feed them cat food as a portion of supplemental food.

Raccoons are not allowed as pets everywhere because they are considered exotic or wild animals. These animals can be dangerous to the environment because they can disrupt the ecosystem by introducing new diseases and stealing food.

Raccoons can easily introduce new diseases to the environments they are not from. These diseases can potentially be dangerous for the animals currently living in those environments.

It Is Ethically Wrong To Keep Raccoons As Pets

Keeping a raccoon as a pet, can in many instances be considered ethically wrong because you removed the raccoon from its normal environment. Even when you try your best to emulate the conditions of a raccoon’s natural habitat, you are depriving the raccoon of its needs.

The raccoon cannot normally forage, establish territory, and perform normal mating rituals. The world you establish for the raccoon is very limited.

What Should I Consider Before Getting A Pet Raccoon?

There are a few things that you should consider before adopting a pet raccoon. The availability of nearby wild animal veterinarians is something that can make a major impact on your pet’s livelihood.

Raccoons Can Be Dangerous To Health and Safety

Raccoons can be difficult to have as pets because of the many diseases they may carry. One of the most common diseases these wild animals may carry is roundworms. These are contagious to animals and humans, and they can transmit to other mammals through feces.

Pet raccoons are expensive after factoring in the many investments you will need to make throughout your lifetime.

Additionally, food for your pet raccoon will be costlier than the food needed for domestic animals like dogs or cats. Raccoons require an abundant diet of natural resources.

Raccoons Are Difficult To Tame

Raccoons are not easy to tame. They are primal and have the instinct to scavenge, including digging through trash. These natural behaviors are difficult for the raccoon to unlearn, especially if you adopt them and try taming them at an older age.

Owning A Raccoon May Not Be Legal In Your State

It is not legal to own raccoons in every state, so you should check the legality in your state before adopting a raccoon.

Even in states where raccoons are legal to own, in most cases, you are required to either obtain a permit or get permission from the state authorities.

To learn more about this, you need to explore the exotic pet laws in your state or country -it may also be county-specific, depending on where you live.

Adhere to any guidelines that make owning a raccoon legal in your state.

Is It Legal To Own Raccoons In My Country?

While we already dealt with the US states where it’s legal to own raccoons, how about other countries around the world?

Raccoons are on the prohibited list of animals, meaning they are illegal to own as pets in the country. You cannot legally own a raccoon as a pet in Canada. If you are caught with a raccoon as a pet, you can face serious fines.

It is illegal to own a pet raccoon as a pet in Australia. There are no permits or licenses that make owning pet raccoons in Australia legal. There is an overwhelming fear that the cages or contaminants will break, thus releasing the animals into the community, where they may become an invasive species.

Is It True That Raccoons Are Common As Pets In Russia?

People in Russia are beginning to domesticate raccoons because of their affection and intelligence. They are becoming increasingly common pets because they are easy to care for, and they live for roughly ten to fifteen years, roughly the same time as other domestic pets.

The more interested people become in adopting raccoons as pets, the more awareness people spread about the safety and care required for owning raccoons. There have been seminars that present information about caring for pet raccoons.