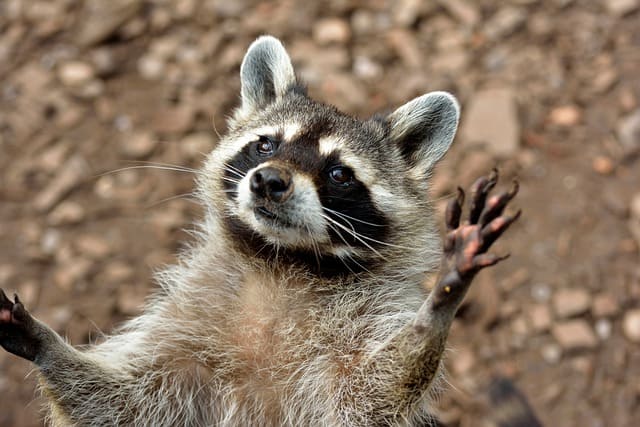 Raccoons are wonderfully fascinating animals, both in their unique appearance and their ability to adapt to numerous environments. One of their most useful skills is navigating the world through their paws.

A raccoon’s paws are one of their best tools for many reasons. Not only do their paws and claws come together to contribute to a raccoon’s survival, but their tiny hands are full of special features.

The Raccoon’s Paws And Claws

Raccoons have paws and claws that make their hands somewhat resemble a human’s. While our hands work wonders, they don’t have the unique set of skills that a raccoon’s hands do.

They are very fast with their hands, which allows them to be excellent hunters and foragers. They are able to reach their hands into the water and grab aquatic life and crawfish easily, which is one of their favorite things to eat.

Their paws and claws help make up for many of their other senses that are lacking. Raccoons don’t have the best eyesight, so their hands have to do the majority of work for them to determine what an object is. Their fingers also have a small amount of callus around them, which helps protect them from injury.

What Do Raccoons Use Their Paws For?

Raccoons use their paws for just about everything. Their paws help them dig through tough surfaces, help them climb to great heights, and even help them navigate water while swimming.

They also have a heightened sense of touch that helps them understand what’s in their hands at all times, which can also help them understand if what’s near them is dangerous.

Their paws also have an incredible amount of dexterity, which helps them to be able to open a variety of things. This includes opening branches and bark in search of food, as well as opening your garbage can and the containers with leftover food inside.

The raccoon’s paws also contribute to their speed when running or swimming, as they hold a surprising amount of strength.

A raccoon’s paws have a distinct appearance. Their hands are larger than many other mammals of their stature. Their fingers are long and skinny, with short claws on the end of each finger. They have five fingers on each paw, while many other mammals only have four. There is also no webbing between fingers.

Raccoons have pads on their fingers, just like humans. When they leave paw prints somewhere, you will be able to see five skinny, separated fingers in the paw print. You are also able to see the palm of their paw.

They also tend not to be big, depending on the size of the raccoon of course. Their footprints (or rear-paw prints) also look very similar to their paw prints, just slightly longer.

Why Do Raccoons Touch Everything With Their Paws?

Many raccoon observers will have noticed that raccoons appear to wash their food. In reality, the water helps ignite their sense of touch even more, making it easier for them to understand what they are holding.

It is well known that raccoons have managed to use their hands better than nearly any other animal in nature. Raccoons are well-known for their excellent sense of touch, especially when it comes to their front paws. This makes up for them having bad eyesight, and you’ll often see them fumbling around with their hands to find food instead of using their eyes.

That is because their front paws have at least four times as many sensory receptors as their back paws. That makes their hands and feet remarkably similar to humans.

Because their claws give them such a sense of control, raccoons have the ability to run up or down a tree either face first or feet first. If they climb down a tree face first, a raccoon will often turn their feet outward, so as to get a better grip.

Why Do Raccoons Have Whiskers On Their Paws?

Raccoons have whiskers on their back paws and just below the claws on their front paws. Just like whiskers on a cat, these sensitive yet powerful hairs will help to communicate the environment to the raccoon in a much clearer fashion.

What Do Raccoons Use Their Claws For?

Raccoons use their claws to help them scratch a variety of things, as this can help them with their digging and climbing among other things. Their claws also work with their strong fingers to help them grip onto things strongly, as well as open especially tricky items.

The word “raccoon” is derived from the Native American word that roughly translates into a description that word describes an animal that “scratches with its hands.”

What Kind Of Claws Do Raccoons Have?

Raccoons tend to have somewhat long claws. Their claws are also narrow, just as their fingers are. They also appear to have a slight curve towards the end. As mentioned, they have whiskers around their claws that contribute to their ability to sense objects through touch.

Do Raccoons Have Retractable Claws?

Raccoons’ claws are not retractable, as they serve a very important purpose for a raccoon’s navigation, foraging, and hunting needs, as well as overall safety. They are also quite short, so they don’t need to be retracted for any reason.

Do Raccoons Have Sharp Claws?

Raccoon claws can be pretty sharp, which is to the raccoon’s advantage. This can help them defend themselves if need be, while it also helps them to be able to break apart anything they see fit. They can cause a lot of damage with their claws and strong paws together if a dangerous situation arises for them.

How Big Are Raccoons’ Claws?

A raccoon’s claws are not very big, but that doesn’t mean they should be underestimated. What their claws lack in size, they make up for in strength and ability. Their claws can be long, but they aren’t big compared to some other mammals of equal stature.

What Happens If A Raccoon Scratches You?

Raccoons can inflict some damage with their scratches. Given that these animals are very fast, it’s best to stay away from them in the wild despite how cute they are. Even though raccoons look cute, they can sadly carry many infections and diseases that can be harmful to humans as well.

If you happen to get scratched by a raccoon, you will want to thoroughly wash the wound with soap and water for at least fifteen minutes. Afterwards, you should go to your doctor or seek medical help as soon as possible. Depending on where you live, you will be strongly encouraged to receive a rabies vaccine as a preventative measure.