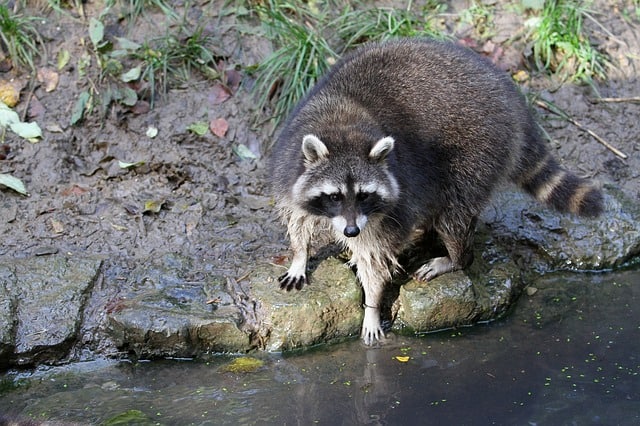 Understanding the etymology (or the study of the origin of words) helps enrich our understanding of things, especially animals. Plus, other languages tend to have a cooler or more smooth-sounding way of naming critters than we do in English. Such is the case for the English word “raccoon” with respect to its name in French, “raton laveur.”

So, why are raccoons called “raton laveur” in French? Because French is a romance language, it derives many root words from the Latin forms. But, the French are notorious for putting their own twist on things and therefore, the name “raton laveur” means “little washing rat.”

While this word reflects the French’s perception of the raccoon’s inherent ability to wash its hands and food, the raccoon is not a rodent. In fact, it’s more closely related to the bear (although not that closely) and other names for “raccoon” in various parts of the world definitely denote this.

What Does “Raton Laveur” Mean In French?

Also, it’s important to note that “raton,” although translating directly to “rat,” refers specifically to raccoons. This is because “raton” is a compound word, including the French word for “rat,” which is rat, and “on,” meaning “one,” “something,” or “someone.”

Why Are Raccoons Called “Raton Laveur” In French?

The reason why the French call raccoons “raton laveur” is due to their behavior (the raccoons, not the French). Even their scientific Latin name suggests their “washer” behavior: Procyon lotor (before-dog washer). Other languages also highlight this ability.

If you’ve ever seen one in action, a raccoon will dig around for food underwater on shorelines and coastlines while also appearing to wash their hands.

They will use both paws to pick up food, examine it and remove unwanted/undesirable parts; sometimes by washing it in water. This gives the impression of “washing.”

Also, the raccoon’s paw pads have a high degree of tactile sensitivity. Rubbing them together in the water helps to soften the hardened layer that covers them after their nocturnal adventures. But, they aren’t “cleaning” their hands as one might expect.

Yes, raccoons really do like to wash things, particularly hands and food. However, it’s not for the same reasons as humans. In fact, raccoons aren’t necessarily the most hygienic creatures on earth. So, either they do this for added flavor or as a means to get water in while eating their food.

When in captivity, raccoons will carry food to water to “wash” it before eating. They will take their food to a stream or watering hole that’s no further than 10 feet (3 meters) or less away.

What’s interesting about this is that raccoons in the wild don’t do this. They’ll wash food in water if it’s available, but they don’t carry it to water for this purpose.

More often than not, raccoons will “wash” aquatic foods more frequently than others. Cleaning dirty food doesn’t seem to be the reason for washing. There is speculation that it’s about personal preference and taste. However, it stands to note that there’s a lot of debate around this in the scientific community.

We actually don’t know why raccoons appear to wash hands and food. Everything is still in the realm of “theory.” It used to be that people thought they did this because they don’t produce their own saliva. But, recent research suggests this assertion to be false.

How Do You Pronounce “Raton Laveur?”

To pronounce “raton laveur” properly in French, first, forget your English way of pronouncing things. Understand that many French words come from the top of the mouth and through the nose, giving them a very nasal sound. Consider the following phonetic pronunciation:

However, when you say both instances of the “r,” it will be a light touch of the back of your tongue to the top opening of your throat. This will give it a more aspirated sound rather than a hard “r” as you would in English.

Are There Any Raccoons In France?

During World War I and II, American soldiers brought raccoons over as mascots for their cause. However, in 1966, some careless soldiers accidentally released a host of pet raccoons into the wild.

Today, they have a stable population in the northern section of France but they have spread across all of Europe. Somehow, they’ve even made it across the ocean into places like England, Malta, and Sicily. Researchers were able to trace their origins back to France. So, raccoons can and do get around; even if they hitch a ride on a boat.

What Are Raccoons Called In Other Languages?

Other languages further enrich our understanding of raccoons because they will actually include the word “bear” in conjunction with “washing.” Although most people consider raccoons to be something of a rodent, they are not. Indeed, they act like rodents in behavior and reproductive patterns.

However, contrary to popular belief, raccoons are not part of the rodent family at all, but rather, much closer to the bear family. That’s right! They’re little bears. The list below indicates some of these words from languages all over the world.