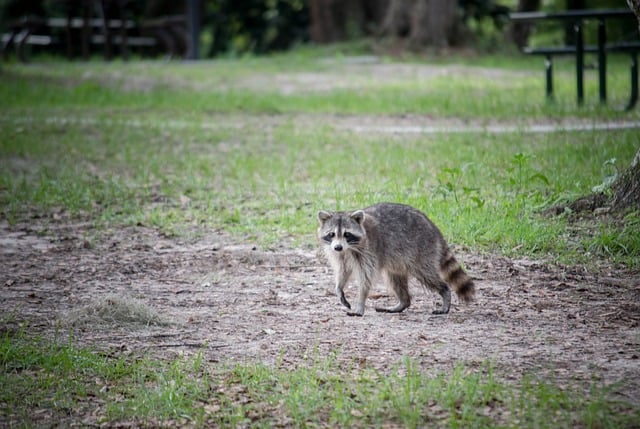 Raccoons are peculiar little critters. They look like masked bandits waiting to steal, thieve or rob whatever they can get their hands on. But, the truth of the matter is they’re just inquisitive critters who are smart, adaptable, and quick when they need to be.

Believe it or not, raccoons are rather fast for their size. They can reach up to 15 miles per hour (mph). While it’s not as fast as you or a dog, for instance, it’s still pretty quick for such a small creature. But, they don’t have much stamina for running and will go only a few yards at a time.

For their stubby legs and small stature, raccoons are fast. But, this is relative since their top speed is around 15 mph. They can also swim, but the speed isn’t much better; reaching a max of around five miles per hour. Of course, the size and age of the raccoon will create exceptions to the rule.

For instance, babies and juveniles don’t run as fast as full-fledged adults. Alternatively, a raccoon that’s unusually larger than the average will be able to run a little faster, around 20 mph.

How Long Can a Raccoon Run at Its Top Speed?

While they can go up to 15 mph, raccoons don’t have much stamina. They can maintain this speed for only a few minutes, getting only a few hundred feet away before they tire. But it’s long enough to get away from predators or other potential danger.

How Fast Do Raccoons Run, When Just Moving Around?

Because raccoons tend to scurry about, they only move between one and five miles per hour. It depends on what they’re doing and how much in hurry they are to do it. If they’re just cruising home, then they probably clock at somewhere around three miles per hour.

But, if they smell something interesting on the way back to their den, then the raccoon may move as slow as one mile per hour. Oftentimes, though, if they’re trying to retrieve food for their young, they’ll move anywhere between five and 10 mph.

Can Raccoons Run Faster Than a Dog? Or You?

No, raccoons cannot run faster than a dog or you. In comparison, they are much slower and you (or the dog) would be able to catch up with them rather quickly.

That said, because they’re low-lying types of animals, they’ll get under bushes and into narrow spaces that you or a dog wouldn’t be able to reach in time.

However, if they end up getting cornered by you or a dog, they will hiss, growl and bark in an effort to protect themselves. When they can’t run away or feel trapped, they will become vicious, frantic, and are likely to bite.

Will Raccoons Run Away When Seeing People?

Whether a raccoon will run away when seeing people will depend on the circumstances and how accustomed the raccoon is to people in general. Typically, if you catch a raccoon digging around in your garbage or garden and you startle the thing, it will run away.

However, if you’re hanging out in the woods and have a few nuts in your hand, the raccoon may not run away. In fact, it may actually appear to beg and give you “puppy dog eyes” in the hopes you’ll share your food. But, if it’s mating season, don’t become a fool for their adorable appearance, they can get mean and nasty.

Will a Raccoon Ever Chase a Person?

In some rare cases, a raccoon might chase a person. Normal, healthy raccoons won’t. If anything, they’ll come up to you because you have food and they’re curious about you in some way. But, if you spook them, they might chase or bite you as a defense mechanism.

Alternatively, if a mother thinks you or a child is threatening her young, she will chase. In this situation, do not run away. Never turn your back on an angry animal; it will leave you vulnerable to attack and raccoons are no exception.

Treat Them as You Would a Bear

Since they’re distant relatives of bears, act as you would in front of a bear. Simply make yourself bigger and walk backward. However, the caveat here is that rather than try to psych out the raccoon (as you would a bear), use a kind and gentle tone of voice. Continue walking backward until you are out of their vision.

The idea is to let the raccoon know you don’t want to hurt her or her babies. She’ll relax when you get some distance from her den.

Whatever you do, don’t provoke her into being upset any further. Avoid taunting, scaring, spooking, or frightening her; just leave the female and her den alone.