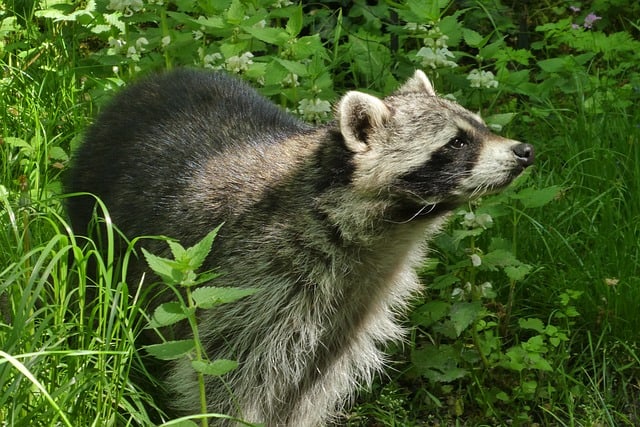 Raccoons have an enduring reputation as bandits that will dig through your trash cans or let themselves into your house to find food, but how they know it’s there in the first place isn’t always fully appreciated. While it’s true that they can visually observe and learn, their noses are much greater tools for sniffing out food sources and much more.

In the rest of the article, we’re going to explore how good a raccoon’s sense of smell is, why their sense of smell is important for them, what smells they generally like, and what kinds of smells can be used to repel them.

Do Raccoons Have A Good Sense Of Smell?

Raccoons, like many land mammals, have a strong sense of smell. This sense aids them on their scavenging adventures in human settlements but has been honed throughout countless generations of raccoons in the wild, helping them both in finding prey and avoiding becoming prey.

Why Is The Sense Of Smell Important For A Raccoon?

Raccoons use their noses for many functions, including both social ones and ones related to feeding. This is similar to many other mammals, though the interesting thing with raccoons is that they show behaviors of predators, prey, social, and solitary animals, so the nose gets a lot of varied use.

Traditional wisdom had pegged raccoons as solitary critters, but this is not entirely true. In addition to the obvious necessity of social interaction for mating, for which their sense of smell plays an important part, raccoons do partake in social activities. For example, not only do raccoons sometimes share dens, but they also share toilet areas.

A raccoon’s nose is also its biggest meal ticket, bringing it to sources of food, from an egg in a bird’s nest to all those delicious leftovers sitting in your trash. There is an inversion of this feeding behavior, where the raccoon would rather not become another animal’s food. To aid in this, their noses can sniff out large predators to know where to stay away from.

One of the primary functions of a raccoon’s nose is to find food, so naturally, food smells will make up the most common smells that catch raccoons’ attention and attract them to areas. This is not limited to food smells that a person would find most appetizing.

Indeed, raccoons have earned their nickname as “trash pandas” for good reason. The smells from all sorts of bits of leftover food in your trash cans can present as a buffet for a raccoon. This is attractive enough to cause the masked critters to go to great lengths to get into your garbage, from manually removing heavy obstacles to manipulating latches with their nimble paws.

Foods that let off a sweet smell are another huge draw to raccoons. These foods will usually have a high energy density, making them attractive to raccoons for the same reason that they are to us.

The difference is that everything a raccoon smells is greatly amplified compared to a person, so candy, strong fruits, and other sugary foods can be extremely attractive to them.

Another category of food smells that raccoons like are those that are representative of their natural feeding habits. Although eggs don’t seem to have that strong a smell to us until they hit the frying pan, a raccoon will pick up the scent before the shell is even cracked. Certain fish will have the same effect on the furry bandits.

Are There Smells That Scare Away Raccoons?

Because of their sensitive noses, raccoons can be repelled by plenty of different smells. Generally speaking, the two categories of these smells are those which overwhelm raccoons’ noses and those that create an instinctive response for them to leave the area.

We can find many household items in the first category of smells. The best way to guess which ingredients might do the trick is to think about which smells humans generally find overwhelming and realize that the effect on raccoons will be that much greater.

Some materials that you may use for gardening can also fill this role. Epsom salt, for example, is another smell that is known to repel raccoons. If you can get your hands on it, sprinkling some Epsom salt around areas that you want to keep raccoons away from is a good way to deter them.

Finally, if you want to keep raccoons away for a very long time and don’t mind getting your hands (and your garden) a bit dirty, you could use urine from large predators. You might think that urine from predators is hard to get ahold of, but it’s actually readily available on amazon.

There are few things that would dissuade a raccoon from exploring an area faster than the thought that something that may attack them visits there.