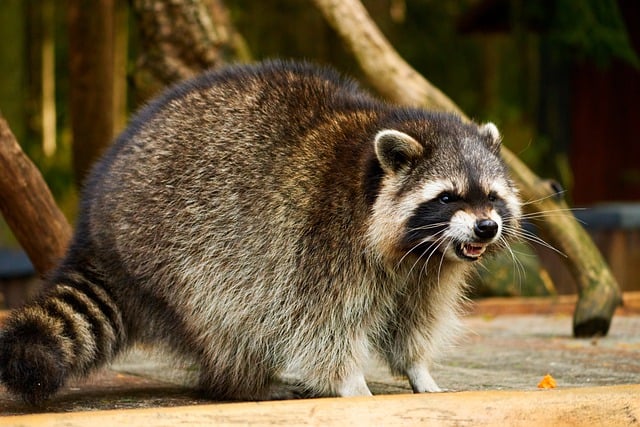 Raccoons are considered small to medium-sized mammals. They weigh usually about 7.7 lbs to 20 lbs. They are 16-28 inches long. As nocturnal scavengers, they evolved to be a perfect size for hunting, running and climbing.

In this article, we will answer your questions about the size of raccoons as they age and how their sizes, weights, and lengths can differ, both between males and females as well as comparing captives and wilds.

How Big Is An Average Raccoon?

An average raccoon is about 16 to 28 inches long. They are quite short, at about 9 to 12 inches tall, but they can stand on their hind legs. Their tails are long, in comparison to their bodies, at 7.9 to 16 inches long.

How Big Can Raccoons Get? (Is There A Record?)

The largest raccoon ever recorded was named Bandit and he weighed in at over 75 pounds. This is around three-four times the weight of an average male raccoon!

Unfortunately, this raccoon’s massive weight was due to negligence by the owner. Bandit was a pet raccoon that did not have enough exercise and was overfed by the owner, causing obesity.

How Much Do Raccoons Weigh?

Do Captive Raccoons Grow Bigger Than Wild Ones?

Captive raccoons can get much larger than their wild counterparts. Wild raccoons need to do a lot of work in order to find their meals. On the other hand, captives are typically fed a more nutrient-dense diet. If they are kept in a cage or a house, they may not get much exercise.

The life of a wild raccoon involves digging for insects and worms, finding acorns, nuts, bird eggs, and berries, catching prey like crayfish, fish, and amphibians, and occasionally stalking small birds and mammals. If the raccoon lives in a suburban or urban environment, they may also use their energy scavenging in trash cans.

Zoos, animal sanctuaries, and rescue centers will typically take special precautions to keep their raccoons at a healthy weight, by providing enriching activities and a specialized diet. Although they are cute, humans should not keep raccoons kept as pets, since they are wild animals.

In the wild, raccoons will typically live 3 to 4 years. Their biggest threat is being hit by a car, especially since they are often out at night foraging in suburban or urban areas. In captivity, raccoons have been documented to live for 20 or more years. This is because they do not have predators in captivity and have access to adequate nutrition and veterinary services.

Are Male Raccoons Bigger Than Females?

Male raccoons are slightly larger than females. This difference may be a few inches in length and a few pounds in weight.

Male raccoons are called boars, while females are called sows. The male raccoon is normally a solitary animal unless it is breeding season. They are less likely to be spotted during the day and they will need to forage less than the females.

Females raccoons need to nurse their babies, so they will go out of the den during the day, so they can eat enough food to produce milk.

Are Raccoons Bigger Than A Housecat?

On average, raccoons weigh 7.7 to 20 pounds. In comparison, most house cats only weigh 7 to 10 pounds.

As a much smaller animal, house cats can sometimes become the prey of raccoons. Typically raccoons will not instigate a fight, but they may attack if they are provoked. The teeth and jaws on raccoons are much stronger and more specialized, but house cats have sharper claws.

How Big Is A Newborn Raccoon?

Newborn raccoons, also known as kits, are extremely small. They only weigh around 100 grams or less! They are about 4.5 to 6 inches long, from the tips of their noses to their tails.

Newborn raccoons are completely dependent on their mothers. They are born with their eyes closed and they are unable to walk. To keep them safe, the mother raccoon will keep them in the warm den.

At about 6 weeks of age, the raccoon kits will slowly begin to walk, first via a crawl and then a shuffle. By 8 weeks, they, under the guidance of the mother, will begin to venture out of their dens and into the world.

How Big Are Juvenile Raccoons?

At around 9 to 12 weeks old, raccoon kits will be weaned from their mothers and able to eat solid food. At this point, they will weigh about 950 grams or more, gaining about 100 grams of weight per week.

They will stay with their mothers for at least another several months and at most another year.

At What Age Are Raccoons Fully Grown?

At around four months, juvenile raccoons are physically fully grown. However, they will only be fully developed mentally at around a year old.

The young raccoons stay with their mothers while they learn and grow. If a juvenile raccoon is abandoned by its mother before one year, the baby raccoon kit may not survive.

Raccoon kits need their mothers to teach them important skills, like climbing trees to run from predators, building dens, scavenging for food, and hunting prey.

How Big Are Raccoon Tracks?

The front foot of raccoon tracks looks very similar to a human hand. Their hind feet have a more similar shape to house cats. Both the front and hind feet have 5 toes each, although the 5th toe on the hindfoot is much smaller.