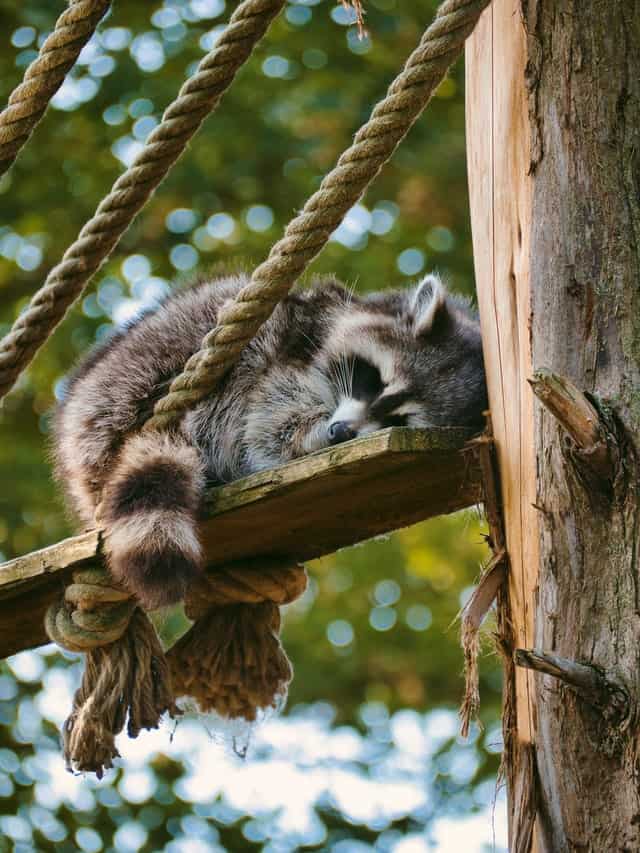 Raccoons are nocturnal animals who sleep in nests or dens. Raccoons sleep together in these nests as family groups, including the female adult and her young. It is also common to find raccoons nesting in your home. In most cases, raccoons will not approach humans or come out during the day. However, they may come out during the day, not always for good reasons.

How Do Raccoons Sleep?

Raccoons sleep at night in nests with their families. The raccoon has built the nest or den themselves, and they rely on their family group for warmth and support. Raccoons seek out somewhere to sleep that is warm and protects them from predators. Typically, a protected area is high and excluded.

When Do Raccoons Go To Sleep?

Raccoons go to sleep in the early morning hours before the sun rises. They are secretive bandits who retire to their nests before humans or daytime predators can spot them. Raccoons will sleep throughout the day, given they are nocturnal animals.

Are Raccoons Nocturnal Animals? Should They Be Out During The Day?

Observe the behavior of raccoons and call animal control instead of intervening yourself. If you live in an urban area with food, improperly stored trash, or other items that might attract raccoons, be additionally cautious of raccoons. Even though raccoons are nocturnal animals, they may still come out during the day.

At What Time Of Day Are Raccoons The Most Active?

Raccoons are the most active at night when less vulnerable to large predators and humans. The nighttime darkness also hides these sneaky creatures, so normal predators like coyotes and other wild canines and wild cats are less likely to see them moving high in the trees.

At sunset, raccoons leave their dens. Then, they scavenge food all night until just before sunrise.

Do Raccoons Ever Come Out During The Day?

Raccoons do not typically come out during the daytime. But there are a few instances when coming out during the day is normal for the raccoon. Since raccoons are more vulnerable in the daylight, they are extra cautious with their movements.

If the raccoon searches for food in daylight, they will often leave their den and return as quickly as possible. Unhealthy or injured raccoons are in no rush to return and often appear to be seeking attention.

New Mothers Come Out During Daytime

Exceptions are when a mother raccoon has given birth and must scavenge to feed herself and her babies. A hungry mother will ignore traditional rules to leave her den midday. Gathering food supplies her with enough protein and nutrients to continue feeding her young.

The cub-rearing season occurs at the beginning of Spring. You may see mother raccoons foraging midday between April and May after giving birth to a litter of cubs.

If you want to identify where her nest is, observe where she goes after gathering food. Even if you follow her, never touch her cubs or separate them from their mother.

Rabid Raccoons Come Out During Daytime

Raccoons usually hide during the day. If you encounter a raccoon acting friendlier than normal, the raccoon might have rabies or another contagious disease. Rabid raccoons are unafraid of humans, and they may attack at any moment.

Injured Raccoons Come Out During the Day

Raccoons who are injured may leave their dens searching for help, including help from humans. These raccoons may be unafraid to approach humans, or they may be lying in the open of a public area. A raccoon will only search for human help if they are desperate and already used to humans.

Hungry Raccoons Come Out To Eat During The Day

Impatient and hungry raccoons will come out in search of food in the middle of the day because they are too hungry to wait until the evening. Impatience or gluttony is the most common in urban areas, where trash is accessible.

How Long Do Raccoons Sleep For?

Raccoons typically sleep until the sun goes down. Once it hits the sun sets, raccoons will leave their dens or the tree where they sleep and begin foraging. On average, this is around six to eight hours per day spend sleeping. The amount of time they spend sleeping depends on the time of year.

Where Do Raccoons Sleep?

Raccoons prefer sleeping in trees in nature, including holes in trees, fallen trees, logs, stumps, and much more. They will also make dens in unfrequented or abandoned buildings, attics, sheds, and crawl spaces.

In general, raccoons make dens above ground in secretive locations and abandoned areas that homeowners do not frequently check, such as the back of a shed or underneath a porch.

Raccoons are masters of remaining stealth, changing their den location daily so predators or homeowners cannot detect their presence.

A tree branch will work in a pinch, but raccoons much prefer small, enclosed spaces. Some common raccoon favorites include:

Raccoon nests look similar to a bird’s nest. However, they are significantly larger. A raccoon nest is much different than a raccoon den. Raccoons make nests in the tops of trees, far from predators. They typically use twigs, grass, hay, and foraged items to build their nest.

The female raccoon will birth babies into this nest in the following months, and they will continue to use the nest. Raccoons will do the same thing in dens found in attics, sheds, and more. They use the same materials, too.

Where Do Raccoons Sleep In The Wild?

Raccoons will sleep in trees in the wild. They avoid sleeping on the ground or in the open because it makes them vulnerable to large predators like wild canines and felines. Staying in trees helps the raccoons escape large predators that cannot climb.

What To Do If I Find A Raccoon Sleeping In My Yard or On My Porch?

Call a pest control or animal removal service if you find a raccoon sleeping in your yard or on your porch. Services like animal control can humanely capture any raccoons you find in your home or property and then release them somewhere they can naturally flourish.

Do Raccoons Return To The Same Place To Sleep?

Raccoons typically do not sleep in the same place each day. Instead, they create new homes every day, so predators do not find their dens.

The only expectation is during wintertime and cub-rearing season. During this time, the raccoons stay put and return to the same nest almost every day. It is either too cold or too much effort to move every day.

Do Raccoons Sleep Together?

Raccoons sleep together in their nests or dens. As they sleep, the family group cuddles together for warmth. The family group is typically limited to the mother and her offspring until the offspring grows old enough to venture on their own.

A raccoon nest can be shared by four or five individuals at a time. Males and females live separately. They only come together for the purpose of mating. Females raise kits in their dens until the fall when the young will strike out on their own.

Male raccoons are solitary mammals, and therefore, they do not sleep in nests or dens with other raccoons. For females and offspring, huddling together is especially important in the winter when there is severely cold weather.