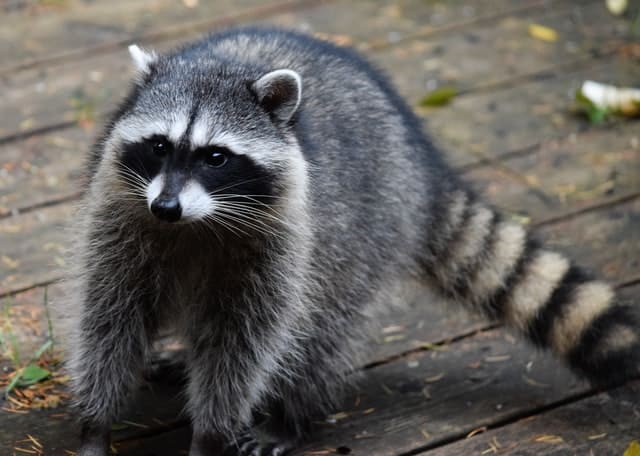 With their distinctive burglar mask-like face patterns and their propensity to enter houses and leave with items that don’t belong to them, raccoons have developed a reputation as sneaky bandits, but what exactly is behind their behavior of stealing?

In the rest of the article, we’re going to look at the common raccoon practice of stealing items, whether they are attracted to shiny things, whether they hoard their stolen items or play with them, explore the extent of their intelligence and curiosity, look at the incredible use of their front paws, and learn how small a hole they can get through.

Why Do Raccoons Steal Things?

Raccoons are believed to steal in line with their scavenging behavior. The interesting thing about this is that raccoons were not always scavengers and continue to not be scavengers in the truest sense insofar as they rarely feed on carrion.

Unlike most animals, raccoons have adapted to and even thrived in the presence of humans and our constantly expanding settlements. While this has impacted their natural supply of food, it has introduced a whole new one to them that involves a whole lot less work.

What Kind Of Things Do Raccoons Steal?

Raccoons living far away from people are likely to primarily be stealing food from other animals. In urban environments or even those with small numbers of people, the furry bandits will steal a wide variety of things, including pet food and shiny household items.

Are Raccoons Attracted To Shiny Things?

One theory for why raccoons are attracted to shiny objects is that these items stand out in the light. Raccoons have poor daytime vision, which would bring their attention to anything that shines.

Another simple theory is that they like shiny things because they are beautiful. You or I may not appreciate the aesthetics of a piece of aluminum foil, but it seems to be great for raccoon dens.

Do Raccoons Hoard The Things They Steal?

Raccoons will tend to bring the things they steal back to their dens or burrows to keep. This includes non-edible items, such as items stolen from homes.

Raccoons evidently have as strong a sense of private property as humans do, just less of an ability to differentiate between items already owned. Or perhaps they just don’t care. Either way, raccoons do like to collect the items they take, though whether this is purely for decoration or some other reason is not completely clear.

Do Raccoons Steal Things To Play With Them?

Raccoons have been observed to engage in behavior with stolen objects that resembles play, but it is not certain that there are no other reasons that may be behind this.

Raccoons use their sense of touch to explore and investigate, so the apparent play behavior may be something more practical.

A similar potential misconception is that raccoons wash their food. In many languages, raccoons are even called “washing bears”. Although they are often seen fiddling with items in water, we now know that their paws are more sensitive when wet, so it is likely that this washing is just exploratory.

Are Raccoons Intelligent or Just Curious?

The short answer is that raccoons are both highly intelligent and very curious. The long answer is a little more complex because curiosity is often a product of intelligence, but how the two get measured separately is a matter of controversy that we will likely never reach a unanimous agreement on.

The American Psychological Association notes that as early as the dawn of the 1900s, psychologists had been studying the mischievous little critters to figure out just how smart they are. The topic was, surprisingly, even more controversial then than it is now, and scientists divided themselves firmly into two camps with distinct opposition to one another.

In one experiment from this era, rats, dogs, raccoons, and human children were subjects in a set-up where flashing lights needed to be observed, remembered and reproduced by the subjects. The rats and dogs failed to remember the sequence when the delay between it and the attempt included distractions, but the raccoons, like the human children, could.

This experiment did not settle the debate, with the opposition calling the supporters gullible in their interpretation of the raccoons’ behaviors, but it certainly gave humanity a much deeper insight into the brainpower of the furry little rascals.

Raccoons are very good at opening doors, windows, and pretty much anything else that needs physical manipulation to open. The reason for this is a combination of their high intelligence and the fact that their front paws have long, dexterous fingers and opposable thumbs.

If that last sentence sounded like I was describing a human hand, you’re on the right track. As long as their small size doesn’t work against them, pretty much any regular thing that a human hand can do, a raccoon can do with their front paws because of how similar they are.

Not only can raccoons help themselves into your house if you leave your doors or windows unlocked, but they can even open your fridge, unscrew the lids off of your jars of food, and do your tax returns on your computer.

That last one was an exaggeration, but the number of tasks that raccoons can do with their hands is incredible.

How Small A Hole Can Raccoons Get Through?

In spite of their lumpy appearance, raccoons can fit through holes as small as 4 inches wide! Although they are not rodents, the same easy rule applies to raccoons when determining whether they can get their bodies through a given hole, which is if the head can fit through, so can the rest of them. Anything smaller than that, and the skull will jam it.

If this sounds really strange to you, remember that the shape that you perceive a raccoon to be is mostly fur. I don’t want to give you nightmares, but if you’re curious as to what a raccoon’s true shape is, you can do an image search for “shaved raccoon.” You will be surprised, but you’ll also understand how they can fit in tight spaces so easily.

Why Do Raccoons Touch Everything?

The paws of a raccoon are extremely sensitive. Although their other senses are very good relative to a lot of animals, their sense of touch is perhaps their most powerful. By touching objects they wish to investigate, a raccoon can determine a lot of finer detail that it may not be able to see that well with its eyes.

You might be wondering why raccoons bother using their sense of touch to figure things out if their vision is so good. The first thing to remember is that a raccoon’s vision is not as good as a person’s, so they are starting off with a bit of a handicap compared to you. This is especially true when it comes to color, which raccoons cannot distinguish well.

The other reason raccoons may find it preferable to use their hands to investigate something is because a lot can be figured out from an object’s texture that vision alone cannot. If something is too hard to chew or covered in a fine fungus, for example, the raccoon can feel this and know not to attempt to eat it.