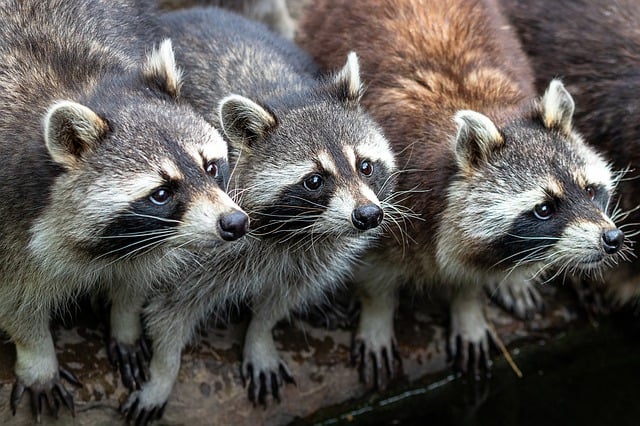 Few animals are more recognizable than the raccoon and a lot of their behavior seems almost human-like, but how sociable are raccoons, and are they intelligent animals?

The understanding of raccoons’ social behavior and intelligence has actually changed quite a lot over the years as more has been learned about these fascinating little bandits.

This article will go into detail about how raccoons interact amongst themselves, with humans, and with other animals, and it will tell you everything you need to know about just how smart these animals can be.

Historically, raccoons were believed to be almost completely solitary animals, fending for themselves and only coming together for breeding purposes. As more studies have been carried out and their environments have changed, however, more has been learned about the different social structures that raccoons can participate in.

In 2002, professor of zoology at Weber State University Samuel I. Zeveloff wrote a book entitled “Raccoons: A Natural History” which concluded that, despite groupings being observed, most raccoons are solitary and they only tend to form groups under certain circumstances or in areas of high population density.

Do Raccoons Live Together In Packs? (or Family Groups?)

While raccoons are often solitary, they can be found living together in small packs, either as a loose social group or when a single mother is supporting her offspring.

A group of raccoons is called a gaze or a nursery and usually comprises between 2 and 8 individuals. A nursery of around 4 is most common, but larger gazes of up to 10 have been observed too.

Interestingly, most small raccoon groups are made up of animals of the same sex rather than a mixture of related raccoons. Males or females tend to group together so that they can scavenge more effectively and find food more easily.

Males also form groups to defend territorial areas or maintain their position of dominance over outsiders that may compete for females during the mating season.

The family groups that raccoons form are short-lived and do not involve a male raccoon. Instead, a mother will separate herself from other raccoons to protect and raise her young (known as “kits) for around 8-12 months.

Once her offspring have matured, they will go out on their own and the mother will return to her previous social group of solitary existence.

The social groups that raccoons live in have changed slightly in recent years, as they have adapted to suburban environments. Raccoons that live in close proximity to humans tend to have an abundance of food resources, which means that they become crowded together in greater numbers than they would be in the wild. Suburban raccoons are more likely to be seen in groups than wild raccoons.

In extreme cases, like in the below video, raccoons get along in very big groups of up to 25 individuals, but this is not very common and usually involves generous amounts of hotdogs for everyone.

Do Raccoons Have Some Kind Of Social Hierarchy?

Despite the loose nature of their social groupings, there is a hierarchy among raccoons which is typically established through dominance behavior.

As is true for many mammal species, male raccoons will fight with each other to determine their respective positions on the social hierarchy. Raccoons are quite scrappy animals and even those that spend time together in a social group will consistently fight over food and other resources.

Typically, larger individuals become more dominant as they are the ones that are likely to win fights against other raccoons. This also means that older raccoons usually have a higher social position because they tend to be bigger in size.

One of the reasons why female raccoons raise their young in isolation is because males will so readily fight other raccoons that they will even fight with their own offspring!

Despite their independent nature and a tendency to fight amongst themselves, raccoons can be surprisingly affectionate. They are not a domesticated species, but pet raccoons that have been raised by humans are often reported to enjoy a cuddle and show a lot of affection for their owners.

Ultimately, though, they are still quite independent creatures. In the wild, young raccoons may play amongst themselves and mothers will show affection for their kits, but they still spend the majority of their time looking out for themselves.

Even pet raccoons are quick to bite and can hurt others when they are annoyed or scared. Raccoons do experience emotions though, like any intelligent and semi-social mammals do, and they have even been reported by owners to show sadness at times.

What Is a Raccoon’s Personality?

Raccoons have some of the most expressive faces in the animal kingdom and that, combined with their human-like hands, gives them personality by the bucketload. There are many different personality traits that people associate with raccoons based on the way that they look and how they behave.

When it comes to their actual personalities, though, raccoons are known to be:

To compare them to domesticated pets, raccoons have the independence and free spirit of a cat but the intelligence of a dog.

Biologically, their closest relatives are other nocturnal mammals like ring-tailed cats and coatis. They have long been considered to be linked to bears but more recent thinking suggests that they have a closer relation to Mustelids (weasels, otters, badgers, etc.).

Raccoons are highly intelligent animals that are capable of learning and solving relatively complex problems. They have a surprisingly good memory and a high IQ.

Researchers have found that raccoons have an average of 438 million neurons in their brains, which is high in comparison to other mammals.

In fact, the researchers that studied the neurons of raccoons concluded that, by brain size and the number of neurons, raccoon intelligence could be compared to that of small primates.

Anyone who has tried to keep raccoons away from their garbage will know that they can solve problems with surprising tenacity and speed.

To test their problem-solving skills, researchers presented raccoons with the Aesop Test, where marshmallows are floated in a water-filled container that is not full enough for the animals to reach the treats.

The researchers then added stones to the container so that the raccoons could observe the water level rising and researchers could see if the raccoons would understand what was happening and try the same method themselves.

The raccoons didn’t just use the stones to raise the water level further themselves, they also found their own solution by tipping over the container to reach the marshmallows.

How Do Raccoons Interact with Other Animals?

Amongst themselves, raccoons can live side-by-side in mutually beneficial groups, but they don’t tend to form relationships with other animals. Raccoons and cats, for example, are usually indifferent to each other and will barely interact when they cross paths.

With other loners of the animal kingdom, like opossums, raccoons might get into scraps, but they usually stay out of each other’s way. When raccoons do engage with other animals, though, it is rarely a positive interaction.

Naturally social animals are more of a risk when it comes to interacting with raccoons. Dogs are much more likely to be interested and curious about a raccoon and this can lead the raccoon to feel threatened and become defensive. Raccoons have been known to bite and scratch at dogs that get too close, which can have serious consequences for either animal.