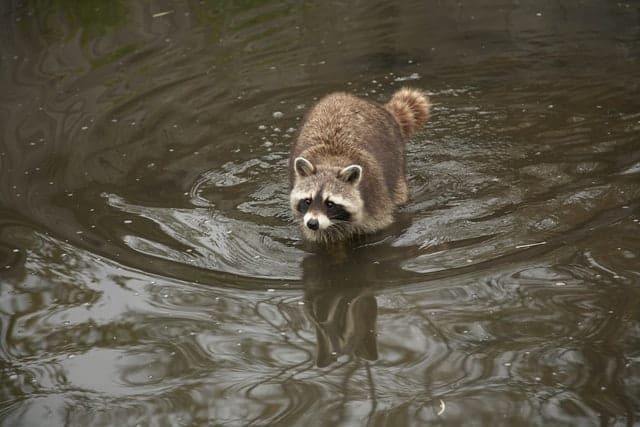 Surprisingly, raccoons are both great swimmers and utilize water for bathing and other cleanliness tasks like washing food. Since raccoons are generally scavengers, they may not dive to hunt in the water, but their swimming skills are still quite impressive. Raccoons have evolved to spend a lot of time in and beneath the water, whether they’re looking for an easy meal or trying to avoid a predator.

Continue reading to learn more about raccoons, how they swim, if they bathe, and how to prevent raccoons from coming into your garden pond and eating your fish.

Raccoons are incredibly adaptable animals. Their natural habitat is wooded, although they also enjoy being near water. Despite their bodies being a little too big to be efficient swimmers, they are pretty adept in the water. Raccoons can swim to depths of around 5 feet, and their breathing apparatus has evolved to the point that they can survive underwater for many minutes with little or no oxygen.

Raccoons’ skin comprises more than 85 percent fur, making it more straightforward for them to swim even in extremely low temperatures. Raccoons utilize their skin as an additional insulator during hibernation. With the increased fat stored from food consumed in the spring and summer, raccoons can easily survive the winter with less food.

Raccoons have been recorded swimming for a long time and have been seen entering pools in private buildings and lingering in the pool for long durations of time. On the other hand, Raccoons are said to be terrified of water since they barely weigh around 2 pounds and lack physical characteristics that allow them to keep their balance in flowing water.

A raccoon can swim at a speed of roughly 3-5 miles per hour and float for several hours. It can dive to 4-5 feet to obtain food if it sees it swimming beneath the surface.

Why Do Raccoons Swim?

Raccoons do not swim for no reason. If you see a raccoon swimming, they are either hunting fish or fleeing from a predator.

How Do Raccoons Utilize Water to Escape Predators?

A raccoon will utilize their swimming skills to escape a predator when under attack. Raccoons can swiftly attach themselves to items in streams, like tree branches and boulders, and can readily navigate their way out of the water. This is especially handy when getting chased by a larger prey who may avoid water and the raccoon’s surprising swimming skills.

How Do Raccoons Hunt in the Water?

Raccoons originated in deciduous woods and mountains, but when they relocated to marshy areas and areas near coastal regions, they needed to learn to swim in order to collect insects and marine creatures in the sea and streams, particularly in urban areas.

Today, raccoons in the wild like to live in wooded environments near bodies of water since frogs, crayfish, clams, snails, and fish are among the watery species they consume. However, they are not natural hunters and are more prone to scavenge deceased animals’ bodies.

Do Raccoons Bathe to Clean Themselves in The Wild?

Despite their appearance as criminals of the wild, Raccoons are remarkably clean creatures. They have been observed washing themselves and their food in streams and even digging latrines in regions that they frequent on a regular basis.

Raccoons, surprisingly, wash their hands and food in water even when there is no water around. This indicates that raccoons aren’t acting this way because they’re washing but rather because they appreciate cleanliness.

Are Raccoons Good at Diving?

Raccoons can swim and dive roughly 4-6 feet below the surface to get a meal. However, it should be noted that raccoons are primarily scavengers and will not typically dive for fish. They would like to collect scraps or will seek in shallow water.

How Long Can Raccoons Hold Their Breath?

While raccoons can dive and swim, they’re not exceptionally good at holding their breath. They can only hold their breath for a few minutes, but they can stay in the water for much longer by resurfacing to get air every once in a while.

Will Raccoons Swim in Your Garden Ponds or Pool?

Raccoons are resilient critters that have quickly adapted to human presence. Raccoons typically nest in hollow logs or rocky caves in the countryside. In cities, though, they may be found in crawl spaces, attics, drainpipes, or even snuggled under your deck.

Although raccoons aren’t prone to swimming, these creatures will be tempted to explore if you have a fish or garden pond in your backyard.

Fish and other tiny amphibians are considered a delicacy for raccoons, and a well-stocked fishpond can provide raccoons with an easy meal. Raccoons will readily stand along the side of your pond as they use their speed, agility, and skill to snare a fish from the water.

Do Raccoons Poop in Pools? (And WHY?)

Raccoons have, unfortunately, been known to defecate in swimming pools and ponds. Raccoons frequently poo in garden pools because they prefer to hide their excrement in the water.

Keep in mind that if you detect raccoon excrement in your pool, you must act quickly since these vile critters prefer to defecate in certain areas and then return to those same areas on a regular basis. Raccoons are often drawn to regions where people reside and play. Keep a watch on the shallow portions of your pool, such as the steps where raccoons are known to defecate.

How Do I Keep Raccoons Out of My Pool?

When a raccoon repeatedly engages in an undesired activity, it is likely to continue. Every night, they use the same primary travel routes and act similarly. So, you may put traps near the pool, capture the animals, and relocate them. Trapping and relocating are excellent humane methods to ensure your pool stays clean and the raccoon stays safe.

Raccoons frequently stroll up to the first or second step and defecate in the shallow water. So, if you can keep them out of the pool by preventing them from reaching this phase, they’ll remain out. Around the steps, you may build a toddler or pet fence to keep raccoons out.

Will Raccoons Try to Drown Other Animals as A Fighting Technique?

It’s easy for a pet owner to misinterpret a raccoon’s protective instincts as an effort to lure and drown their pet. Pet owners hear horror stories about raccoons trying to drown beloved household dogs. However, if a raccoon appears to be trying to drown a dog, they’re only attempting to avoid danger or defend itself from a huge predator.

It’s critical to keep your pets enclosed and away from wildlife at all times.

Raccoons and dogs sometimes get into vicious fights, especially if the raccoon has been reared among dogs or if the dog is fed outside. In most cases, a dog poses a more significant threat to a raccoon than the other way around. A raccoon will not attempt to drown your dog without being provoked.

When cats and dogs are happy to share their food, raccoons tend to keep their predatory attitudes to themselves. However, when a raccoon encounters an aggressive cat, scraps can happen. While raccoons have a hard time attacking larger, more aggressive canines, smaller cats and kittens appear to be the same size as their main prey.

While your cat is unlikely to be drowned by a raccoon, they may become involved in a fight. Feeding your pets indoors is the best way to keep them safe from raccoons.