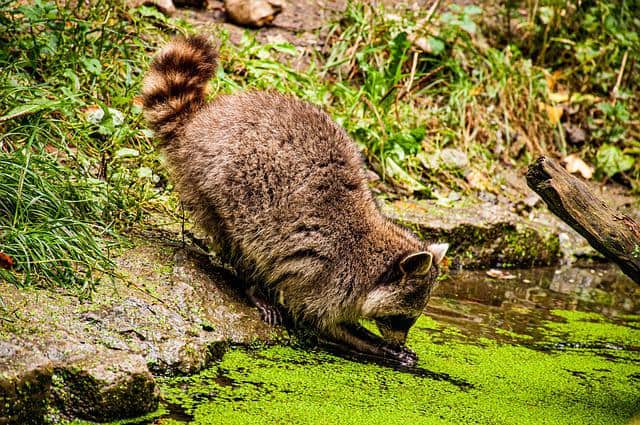 Raccoons are famous for carrying things around with their tiny human-like hands and you’ve probably seen videos of them dunking different things into water. There are even a few popular clips of raccoons giving smartphones a quick wash!

In other languages, the raccoon is actually named after this washing-behavior, like in Danish where it’s called a “washing bear” and in French where they say “washing rat”.

Most people assume that, when they are doing this, raccoons are cleaning their food before eating it, but do raccoons actually wash their food?

Although it does look like they are washing their food to make sure it is clean before they eat, studies into the behavior have indicated that the act of “dousing” an object is likely a simulation of natural dabbling behavior that may be a fixed action pattern or may help them to explore their food before eating.

This article will go into detail about this curious behavior that raccoons exhibit and what the science says about why raccoons will submerge their food before eating it. You will also find out whether or not raccoons are actually clean animals in general.

Do Raccoons Wash Their Food Before Eating?

While “washing” food before they eat it is a widely observed and commonly recorded behavior among raccoons, scientific studies have suggested that sanitation is not the primary purpose of the act.

A study carried out by the Zoological Society of London found that the raccoons in their zoo submerged meat 10 times more often than plants, but they would not clean dirty earthworms before eating them and were not more likely to rinse dirty crabs than clean ones.

They also noted that the raccoons would imitate the action of “washing”, and would move their front paws in the same way, even when there wasn’t any food or water around.

All of this suggested that the purpose of dunking their food in water wasn’t actually to get rid of dirt, although it may be a beneficial side effect. Biologists now call the behavior “dousing” instead of “washing” and have alternative theories as to why raccoons do it.

Do Raccoons Need Water to Eat?

One of the first prominent theories that would explain the action of dousing their food was that it might make it easier for raccoons to swallow and digest whatever they were consuming. You could perhaps compare it to adding milk to your cereal, maybe making their food wet was intended to moisten it because it is too dry?

This idea was partly based on an assumption that raccoons might lack the ability to produce saliva, though this has since been proven to be false. Raccoons have perfectly normal salivary glands, like most mammals, and don’t have any particular need for pre-moistened food.

This theory also seems less likely after it was observed that raccoons are not more likely to douse dry food than wet food. If they are still submerging wet foods as often as dry foods, then it is probably not because they need water alongside their food while they are eating.

Why Do Raccoons Submerge Their Food?

So, if it’s not for the purpose of washing and getting rid of dirt, and it is not to add moisture to their meals, why do raccoons douse their food before eating? Scientists have a couple of theories that may explain the behavior.

It has been suggested that, because raccoons gain a lot of information about objects through their forepaws, they may douse their food in order to explore it further before eating.

This would indicate that the behavior is more about enhancing the experience of eating rather than a necessary action that the animals need to carry out for any particular dietary benefit.

Studies have found that wetting the skin increases the responsiveness of the nerves in a raccoon’s paws, which suggests that they are able to explore an object more closely after they have soaked it in water.

It is also interesting to note that raccoons have whiskers on their paws as well as on their faces. They use these to gather more information about the objects that they touch, which shows how important tactile response is to the way raccoons view the world around them.

Today, most scientists believe that raccoons douse their food as a substitute for normal dabbling behavior that they would otherwise be doing in the wild.

In their natural habitat, raccoons will dabble around in the water to feel about for aquatic prey and explore the bottom of a stream or a pond.

The act of dousing food is usually observed in raccoons that have been raised in captivity, where they are not able to dabble naturally. This indicates that this action is actually just a substitute for the dabbling that they would normally do and doesn’t really serve any particular purpose.

Movements like these are known as “fixed action patterns” which essentially means that it is an action that raccoons instinctively carry out even if it is not necessary for the environment. This is the conclusion that famous zoologist Dr. Samuel Zeveloff indicates in his seminal text in the field of raccoon study, Raccoons: A Natural History.

Why Do Raccoons Steal Objects and Put Them in Water?

With all of this in mind, it is easier to understand why raccoons might put other objects into water as well as their food. If it is a fixed action pattern, then they are more likely to carry out the same action with other things besides food.

On the other hand, they may simply want to explore the object, and submerging it helps them to feel it in greater detail.

Unfortunately for some, the end result is the same. Raccoons may well steal something that shouldn’t get wet, like your phone, and give it a dunk in some nearby water!

Are Raccoons Cleaner Than Most Animals?

Knowing that they are not actually trying to wash off their food before eating it, does this mean that raccoons are not cleaner than other animals?

Although they don’t clean their food in the way that some people think, raccoons are relatively hygienic. They will groom themselves like cats, to remove dirt and parasites in their fur, and they are one of few mammal species that actually designate a separate latrine area for cleanliness.