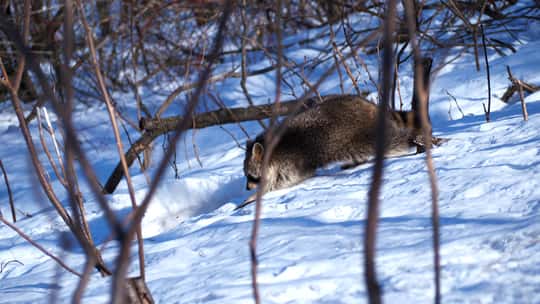 As winter approaches many animals need to take steps to prepare for the harsher conditions. Freezing temperatures render it harder to find food, making it the most challenging time of year for most wild species. Luckily for raccoons, they are extremely adaptable and well suited to changing climates.

Raccoons use a mixture of behavioral and physical changes to brace for the cold and can adjust these to the specific climate of their region. In this article, we will be discussing the series of adaptions that raccoons go through to combat winter; highlighting the reasons that they cope so well.

How Do Raccoons Get Through Winter?

Raccoons have several different ways of getting through the winter. Due to their great adaptability and dominant personality, surviving in the colder months is not generally a struggle for them.

One of the changes raccoons develop is the length of their coat. Whilst not necessary in the summer, an extra coating is essential in the winter for them to stay comfortable.

Raccoons grow a thick winter coat with guard hair of over 2 inches and underfur of over 1 inch. This helps them trap heat to ensure they are warm both in and out of their den. Depending on how cold the climate they live in is, they will grow their coats thicker or thinner to match.

Raccoons are opportunist eaters and will pretty much devour whatever they can get their paws on. During the summer they eat as much as they can to build up fat which helps them survive during winter. It’s due to this diet that they thrive so well.

Since raccoons are omnivores, they will eat anything from animals, vegetation, insects, and even human garbage. It is vital for them to scavenge as much as they do during spring and summer, as in the winter they will mostly live off acorns, fruit, or any injured small animals they can find.

The majority of this fat accumulates in their tails. When it’s cold, they wrap their tail around their body like a blanket to keep them warm. Depending on how cold the climate they live in is, raccoons can lose up to 50% of their body fat in the winter.

Raccoons also spend much less time searching for food and instead preserve their energy. Raccoons will generally drift in and out of sleep for several weeks before heading out to eat. The days they choose to leave their den are typically the warmer ones.

Raccoons Find Shelter for the Wintertime

Unsurprisingly, as the weather gets colder, raccoons seek out warm places to construct their dens. Hollowed-out trees are usually a common site, however, raccoons are very resourceful and often overpowering when it comes to finding shelter.

Raccoons have been known to take over underground homes, dens, or shelters from other animals. Typically they would go for rabbit burrows or animals of a similar size, but on some occasions, they will chase a fox out of its home.

Although they are usually solitaire creatures, when necessary they will group up and share their den with other raccoons to provide extra warmth from the body heat.

Do Raccoons Hibernate in Winter?

Raccoons can’t enter a true state of hibernation, meaning that they stay active all year round. They do however enter a prolonged state of inactivity, this is known as ‘torpor’. Their inactive state normally begins when the temperature drops below -9 degrees celsius (or 15 degrees Fahrenheit).

For this reason, it’s much less common to see raccoons in the wintertime. Raccoons can sleep for several weeks at a time before needing to wake in search of food. They use the extra fat that they stored over summer and expend it during winter.

But unlike true hibernators, torpor alone will not get them through winter. As well as foraging for food and water, the raccoons also need to wake up in order to restore their body heat. If they wait for too long before replenishing, they run the risk of losing too much body fat.

Torpor is similar to hibernation, except it’s a less extreme version. In torpor, mammals will still be alert to predators or nearby food. The word can be translated to ‘lethargy’ or ‘sluggishness’ to describe a person’s state.

When a raccoon enters torpor, their brain and body temperature will lower and their insulin level will rise to control their blood sugar. This allows them to reduce the amount of energy they use on a day-to-day basis.  Although they can sleep for several weeks, they can not rely on torpor for the whole winter without waking.

Their metabolic rate will also drop, accompanied by an inability to defecate. This is caused by an adaption of endothermic vertebrates that enables raccoons to survive the energy-expending cold temperatures.

It is not only mammals that can enter torpor – certain species of avians and plants also use this method of dormancy. Depending on the species, torpor can last a day, a month, a season, or even years.

Do Raccoons Migrate to Warmer Places in Winter?

For anyone that has had raccoons visit their homes during winter, you’ve probably already guessed that they do not migrate. They instead survive in place, taking any opportunity for warmth that’s available to them; which often ends up being someone’s house.

Raccoons do make dens or find shelter in hollowed-out trees, but depending on the severity of their climate they are likely to go the extra mile. It’s not uncommon for raccoons to spend winter in sheds, caves, abandoned cars, barns, or even acquired houses.