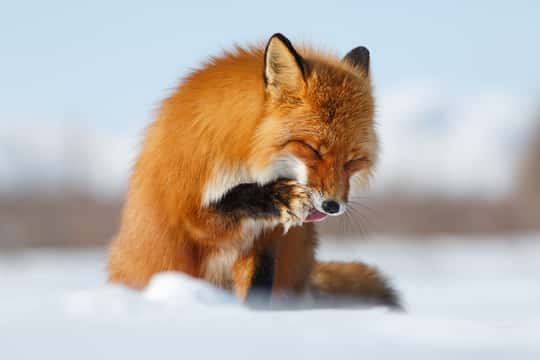 Foxes’ furry paws are similar to other canines, with four toes with retractable claws and a triangular paw pad. Bristly fur covers the tops of the fox’s paws. The most common colors for an adult fox’s paws are black or maroon. The shape of a canine’s paws can make it easier to identify the animal you encountered.

This article discusses red fox paws with a heavy focus on their appearance and shape. It also answers questions about the red fox’s sharp claws, including if red foxes have retractable claws and if red foxes have dewclaws.

In addition to the size of these paws, the appearance may vary based on the color of the paws. As the adult fox matures over time, its fur will get darker until the fur on its paws is entirely black with speckles of red and maroon.

If the fox is a younger adult or within its first year or two, it may still have red paws. As it gets older, it will darken more until the base of its feet become black.

A fox’s pawprints look similar to wild canines. The paw pad is triangular with four ovular toes and claw marks in front of each toe. The front track is ovular, and the rear track is diamond-shaped. Front tracks are also 1¼ inch larger than the hind track because of the larger paw pad’s size.

The trail of a fox is neat and consistently in a straight line. They are decisive animals who make decisions in advance, so you will never see them suddenly stray from their course. You can visibly see the decisiveness of the red fox in their tracks.

What Color Are A Fox’s Paws?

Red foxes are typically red, but there are several other color variations too. Brown or black fur is common for tinting red fox paws to appear maroon. Genetic mutations can cause discolorations in a fox’s paws, changing from red to strange colors like white or grey. These genetic mutations often happen when a fox does not consume enough melanin—the lack of melanin results in limited color development.

Baby foxes, also called kits, may have white paws before developing their red paw fur. Red paw fur is a protective layer, which repels water and adapts to the color of its environment. The red layer of fur comes a few months after the fox is born.

Can Red Foxes Be Different Colors?

Red foxes can be many different colors besides red, especially as kits. Before foxes develop red fur, they can have white paws or white fur. When a fox does not have a balanced diet, this can also impact the color of its fur.

Melanin is a natural pigment, which must develop in the red fox to turn its fur into different colors. A genetic melanin mutation may cause an albino red fox or other color mutation. A fox with a genetic mutation is still a red fox, despite any color deviations.

Do Foxes Have Retractable Claws?

Do Foxes Have Dew Claws?

The fox only has one dewclaw, located halfway up the back of the fox’s arm. The dewclaw is not retractable or used for purposes other than keeping them balanced while running. Most of the time, the red fox’s dewclaw assists them in chasing prey. However, it can also be good for assisting in running from predators.

How Sharp Are Foxes’ Claws?

Red foxes have extremely sharp claws. Claws are a major part of the red fox’s hunting strategy because, in many cases, red foxes will rely on their claws to pierce their prey’s skin.

Do Foxes Use Their Claws To Fight?