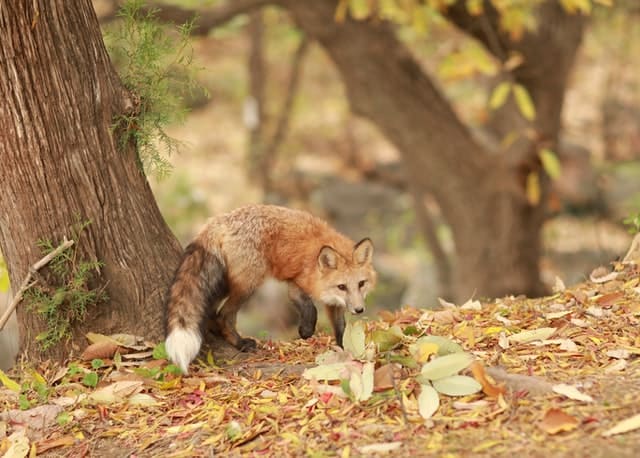 Even though the red fox is a predator, it is not very dangerous. Healthy red foxes pose virtually no threat to humans and larger animals, such as dogs or cows. They are only known to approach humans if they are frequently hand-fed or rabid. Red foxes will approach smaller animals as prey, but there are things you can do to scare away the fox and protect your small pets.

How Dangerous Are Red Foxes? (To You, Your Pets, And Your Livestock)

Red foxes are not considered dangerous to humans or larger animals. Unlike most predators, red foxes are flighty and will flee when approached by an animal the size of themself or larger. The only livestock or pets that a red fox may approach are small animals, such as rodents, chickens, or kittens.

With this in mind, red foxes are not very dangerous. If you have small animals, you can keep them safe by housing them inside sturdy, fenced-in locations. All larger animals should not have any problem with red foxes.

Will Foxes Ever Attack Humans?

It is incredibly rare for a red fox to attack a human. Since red foxes have skittish personalities, they are highly likely to run away if you get close. The only reports of red fox attacks on humans are when the creatures are rabid. Even then, most rabid red foxes will try to run away when approached by a human.

In other words, it is practically impossible for a fox to attack a human, although it might happen whenever the red fox is rabid. Overall, the chances of being attacked by a fox are incredibly unlikely.

Whenever you first meet a red fox, it will likely run away from you. However, it is relatively easy to tame red foxes. If you give a red fox some food, it will learn to follow people around in order to get food. This is especially likely to happen if the red fox lives in an area where people feed it frequently.

It’s important to note that you should not feed wild red foxes. Even though the animal will not attack you or try to harm you in any way, it could become dependent on humans for food. As a result, the fox may forget how to hunt.

Just like any other wild mammal, red foxes carry diseases and parasites. Most commonly, red foxes have intestinal worms, flukes, lungworms, and other forms of parasites. They also can have fox mange, rabies, and distemper.

Luckily, most contagions carried by red foxes are rarely transferred to humans. As for diseases specifically, there are very few reports of humans being infected from a disease caught by a red fox. Unfortunately, a lot of the illnesses red foxes carry are contagious to other mammals, such as dogs.

If you do come into close contact with a red fox, especially if you get scratched or bitten, it’s important that you go see a doctor.

Because the red fox is a predator, they hunt for food, but they aren’t very likely to attack household pets. Most household pets are too large for foxes to go after. Plus, foxes will associate that area with humans, causing them to avoid household pets as a whole.

There are some cases of foxes attacking smaller household pets. So, it’s important to be aware of the size of your pet if you have foxes outside. Bunnies, hamsters, guinea pigs, and birds in outdoor cages can be a tempting meal for a fox, so make sure that your animals’ cages and enclosures are up for the job!

Are Cats And Dogs In Danger From Foxes?

However, certain cats and dogs are in more danger than others. Kittens specifically have a high risk of being preyed upon by red foxes, whereas larger cats do not. Likewise, puppies or very small dogs may be the right size for foxes. Still, it’s more likely for the red fox to go after a different animal than a dog or a cat.

Do Foxes Go After Smaller Outdoor Pets And Birds?

It is likely that a red fox will go after small outdoor pets, such as birds, chickens, and rodents. These sorts of animals are the perfect size for red foxes and they aren’t known to fight back. If you have small outdoor pets, you certainly need to protect them against red foxes.

Is Livestock In Danger From Foxes?

Certain livestock is in danger from foxes, but not all. Generally speaking, small livestock with minimal self-defense, such as chickens and rabbits, make the perfect prey for foxes. Larger livestock, such as cows, horses, or donkeys, are not in danger at all from foxes because of their large size.

They just need to step on the fox, and the danger will be over!

Are Foxes Dangerous To Sheep, Goats, Pygmy Goats, Pigs Or Other Small Livestock?

Some small livestock is in danger from foxes. Some of the most popular small livestock that foxes hunt include rabbits. Occasionally, foxes may go after smaller sheep, goats, or pigs, but these animals aren’t necessarily the fox’s first choice, since they’re still too big.

It is much more likely that a fox will go after poultry. Chickens are the fox’s favorite treat. Consequently, a lot of chicken farmers have problems with red foxes and have to act accordingly. Geese and turkeys aren’t as threatened by foxes due to their large size.

Foxes are not considered aggressive or vicious animals. On the contrary, these animals are actually very flighty and are easy to scare away. They aren’t even known for being particularly vicious against other animals. As a result, you don’t have much to fear if there is a fox living in your area.

Some experts believe that the fox’s evolution may explain why they aren’t as aggressive as other animals. Although the fox is its own genus, it belongs to the same family as the dog. Experts predict that the fox developed during the domestication of dogs.

This explains why foxes, even wild foxes, are a bit tamer and easier to lure than other wild animals – they came about when pet dogs did!

What To Do To Scare A Fox Away

Scaring away a fox is not very difficult. You will primarily want to create noise and light every time you see the fox. This will teach the fox that the area is associated with loud noise, lights, and humans, which will cause the fox to avoid that area entirely.

The easiest way to do this is to add motion-activated alarms, lights, (link to amazon) or sprinklers. Anytime the fox walks by, the sensor will activate the device, scaring away the fox.

How To Avoid Foxes Getting Near Your Animals

If you have small animals on your property, it’s important to keep foxes away. Luckily, it’s not too difficult to accomplish this. Firstly, set up motion-activated devices to scare away the fox every time the fox comes around. Motion-activated lights, sprinklers, or noisemakers will all get the job done.

By both scaring away the foxes and housing your animals correctly, it should be relatively easy to prevent foxes from getting near your animals.