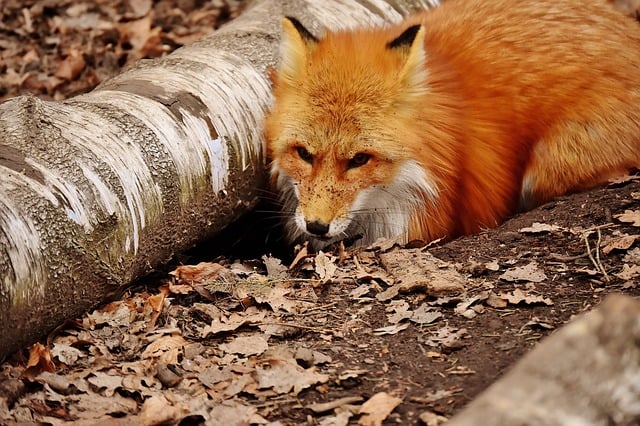 Red foxes can dig well because of their sharp nails. It is an instinct for the small canid to dig for their survival needs, like hiding their food in caches or creating dens for their young during the kit-rearing season. Red foxes dig in gardens to eat underground veggies like potatoes, carrots, and beets.

This article discusses the fox’s digging habits and why foxes dig. It also answers questions like if a red fox digs burrows and how you can keep a fox from digging in your lawn or under your fence.

Red foxes dig holes to find food, create burrows, or access things. They dig underground after smelling an enticing odor, such as a decomposing animal, a rodents den, or veggies that grow underground.

Foxes dig holes for survival needs. They will dig holes because they smell something below the surface they can eat. They may also dig holes at the end of their gestation period as a place to birth their young. It is common for foxes to dig underground for carrion.

Foxes may dig underground to unearth decomposing animals. Foxes do this because of the intense odor and their desire for meat.

Are Foxes Good At Digging?

Foxes are great diggers because of their sharp nails, which help them unearth the soil at fast speeds. They have used digging to complete many of their most important tasks, such as survival, child-rearing, hunting, and more. The red fox can dig in nearly any environment, including ideal or harsh terrains.

Foxes are known for surviving well in the tundra, where they can dig excellent underground burrows.

Can Foxes Dig Up Lawns?

As an opportunistic animal, the coyote will dig anywhere for a plausible reason. Foxes will dig holes in lawns, gardens, and other urban or residential landscapes. Well-kept lawns that are watered and cared for will attract grubs, worms, and other meaty insects the fox loves to eat.

Your well-manicured landscape is the perfect environment for small mammals, an ideal meal for the small omnivore.

Do Foxes Dig Under Fences?

Foxes can dig under most fences, depending on whether they see the opportunity worth it. However, they cannot dig through or beneath a chicken wire fence. Installing chicken wire several inches beneath your fence line will deter the fox from trying to dig into your yard.

Do Foxes Dig Into Wild Rabbit Hutches When Hunting?

Foxes will dig up rabbit hutches when hunting to gain access to hiding rabbits. Rabbit hutches are only a few feet into the ground, making them easy to access without exerting too many calories. Foxes dig into these hutches and retrieve the rabbit from inside. If the rabbit is not in the first burrow layer, it will give up.

Do Foxes Dig Their Own Burrows And Dens?

Foxes will dig a burrow for themselves and their kits at the end of their gestation period. However, foxes prefer stealing burrows from other animals or overtaking abandoned burrows, so they do not waste energy digging. Since they rear kits in winter, conserving energy is critical for the fox.

Foxes like to burrow in hollowed trees, fallen logs, and underground. If necessary, they will dig an underground burrow themselves, but they prefer stealing abandoned burrows. The wild fox will have several burrows scattered around the fox’s territory. They use these burrows throughout the first months of their kit’s lives to keep them protected from potential predators.

Do They Live Underground?

After reaching the age of maturity, foxes prefer to live aboveground. Living aboveground means the fox can remain more aware of its surroundings and leave quicker. Even though the fox prefers living aboveground, they still dig holes frequently. After mating, they also spend a few months feeding their young and sleeping inside dens.

Typically five to seven foxes will share one den. The number will vary based on how many kits the mother had and if the male sleeps with them. Dens are used exclusively while raising kits. Otherwise, they sleep outside alone under trees.

When raising their kits, the mother and father will share the den with their young. There are usually a maximum of seven foxes in one den, including the kits. Sometimes the male will sleep outside the den. However, it is safer if he also sleeps inside to help with tending to the kits.

If any foxes remain in the leash of foxes, they may sleep in the same den or a nearby den, depending on their social status.

Will Foxes Return To The Same Den Each Year?

Since the dens are within the fox’s territory, they typically return to the same dens each year if they are still standing. However, fox dens are fragile and are known to fall over time. Because of this, foxes may not have the chance to return to all previous dens.

At the end of the gestation period, the foxes will evaluate their previous dens and decide whether to dig new dens.

Do Foxes Ever Abandon A Den?

Foxes abandon dens if they feel threatened. Large predators, other foxes, or a general uneasiness are common reasons why foxes may become spooked and choose to move their den location. If the mother and father sense any uneasiness, they will gather their kits and move them to another nearby den.

Foxes will have several dens across their territory, so they may move from one to another when abandoning them. They may return to the previous den when they think it is safe again, which could be days, weeks, or the following mating season.

Caching excess food is a common behavior in the red fox. The red fox will typically hunt more food than it can eat in one sitting. It will dig a hole, called a cache, and then bury it. By covering their prey with dirt, they mask the aroma of the catch.

Most often, cached foods are fresh prey or dead animals. In addition to caching meats, foxes steal eggs from farmers or birds’ nests, which they will also bury.

Below is a video example of a fox in an urban setting actually coming right up to a house and burying a stolen egg in a planter!

How Can I Stop Foxes From Digging Up My Yard?

Use chicken wire fences, odor deterrents, and high-pitch noise boxes to keep foxes from digging up your yard. Remove potential food sources to prevent foxes from entering your yard.

Odor deterrents are a humane way of stopping foxes from digging up your yard. Sprinkle strong-smelling spices like chili powder around the perimeter of your lawn to keep the foxes from crossing into your lawn. You can also use vinegar or purchase wolf urine (link to amazon), which you can pour around the perimeter of your lawn. These smells should keep the foxes away.

Use Chicken Wire To Keep Foxes Out

Install chicken wire around the perimeter of your yard to keep foxes from digging holes under your fence. The chicken wire should extend a few inches below the surface. Red foxes cannot break through chicken wire, so they will give up instead of wasting energy.

Removing garbage and food sources from your property removes the fox’s interest to invade your space. Disposing of all food sources means taking in your pet’s food bowl, securing your garbage, and sealing your compost bin.

If you have a garden, consider covering it at night, so foxes do not dig up your vegetables to eat them. In many cases, a garden is the amplest food source on your property.