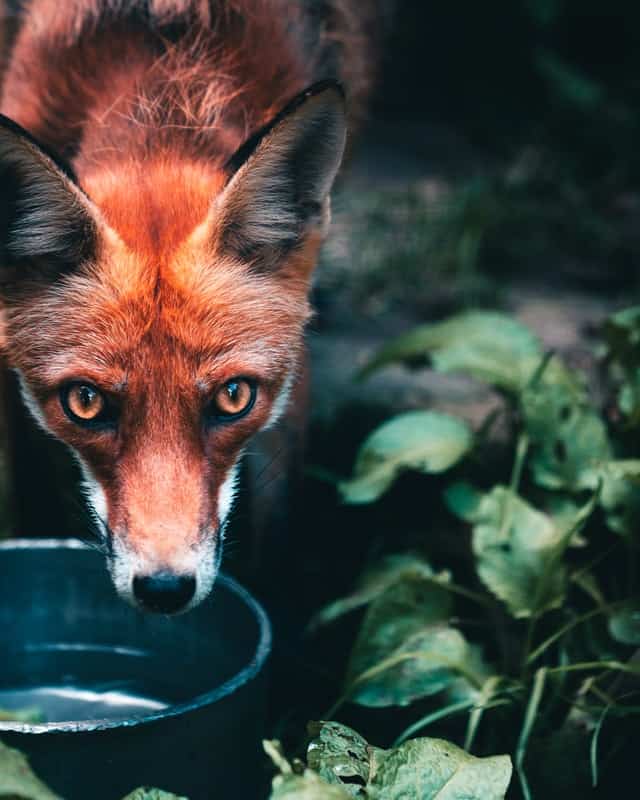 Foxes are canines who drink water by lapping it up with their tongue. According to NASA, inertia is why lapping water is effective. The extreme force allows the fox to throw water to the back of its throat and take in large gulps at a time.

The fox drinks roughly eleven ounces of water each day based on its body weight. However, the number of ounces required will vary between foxes. Typically, female foxes drink less than males. You may notice as canines like the red fox get older, their water consumption will increase. This increase in water consumption comes from additional body weight and activity.

The red fox is so great at finding water that foxes can seek out water in urban environments and may even dig for water if they cannot find it near them.

The fox is very similar to the dog in its drinking habits. Both animals lap the water with their tongues and hydrate themselves by consuming water-based foods when they cannot find nearby water.

Generally, canines require one ounce of water each day for every pound of body weight. The average canine should have fresh water daily. However, the fox may drink from unfresh water sources because of its ironclad stomach, making it resistant to many parasites.

Foxes drink water by lapping it up with their tongues and throwing it to the back of their throats in large amounts. This way of drinking allows the fox to consume large gulps of water at a time. According to NASA, inertia plays a major role in the canine’s ability to drink water efficiently.

Canines like the red fox will scoop water into their mouths, effectively filling their mouths with water before swallowing.

How Much Water Foxes Should Drink

Foxes are canines, requiring an ounce of water for each pound of body weight. Since the average red fox weighs between eight and fifteen pounds, the red fox requires an average of eleven ounces of water each day. The fox must remain hydrated by consuming water each day, either by drinking or eating water-rich foods.

Places Foxes Drink In the Wild

Foxes will find water in various locations in the wild, such as natural water bodies, and they may even dig for water. They are skilled and cunning animals who use their intelligence to track nearby water sources.

A fox may even dig for water if there are no nearby water sources. Foxes are excellent diggers, making it tremendously easy for them to dig deep holes into natural springs.

Foxes have iron stomachs, and they can drink from nearly anything, including chlorine-filled water such as pools or fountains. While these can still be dangerous, the red fox is more resilient than other canines. They are also adaptive and may develop resistance to chemicals like chlorine. However, this is not always the case.

Pools are great backyard water sources for foxes because they are readily available in urban environments. Most people keep their pools full year-round, making them easily accessible for the urban fox.

One of the most common drinking sources for urban foxes is pet dishes. They often seek out these water bowls because they are readily available to the wild canine.

The red fox contaminated the water by drinking from your pet’s dish. Contaminated water may contain diseases and parasites, which can be deadly to your canine or feline companions.

To avoid inheriting diseases, you must exchange your pet’s water daily. Always clean your pet’s outdoor water bowls to avoid any spread of disease.

What Do Foxes Drink Other Than Water?

Foxes cannot drink anything aside from water and their mother’s milk. They may consume food that is full of water. However, they cannot drink other drinks like soda or coffee.

The red fox is adaptive to its environment. They will drink from urban water sources, such as pools and fountains. If necessary, the fox may drink from dirty water puddles, but typically, they will find freshwater.

Foxes cannot drink anything aside from water and their mother’s milk. If you find a baby fox, you cannot feed a baby fox cow’s milk, or they can get sick.

The ingredients in human beverages are toxic to the red fox, so they avoid drinking them. They cannot drink from human drinks like soda, juice, alcohol, or coffee. If they drink from one of these, it is poisonous and could result in tragic illness or worse.

Aside from drinking water, foxes will hydrate themselves by consuming water-rich foods. The most common water-rich foods that foxes eat are fruits. The types of fruits that the red fox eats vary. In most cases, they are a great source of water and hydration.

Foxes will eat meats and blood-filled food. However, they do not intentionally seek animals to hydrate themselves with their blood since animal blood is not hydrating. Instead, they will go to actual water sources for hydration.

Like many animals, foxes can be attracted to the smell and taste of antifreeze used in cars. Antifreeze is known for having a sugary taste, but it is also highly toxic.

If you do maintenance or repair work on your car at home, you should therefore be extremely cautious of exposing of the poisonous fluid correctly, so that no pets, wildlife, or children can get into contact with it.