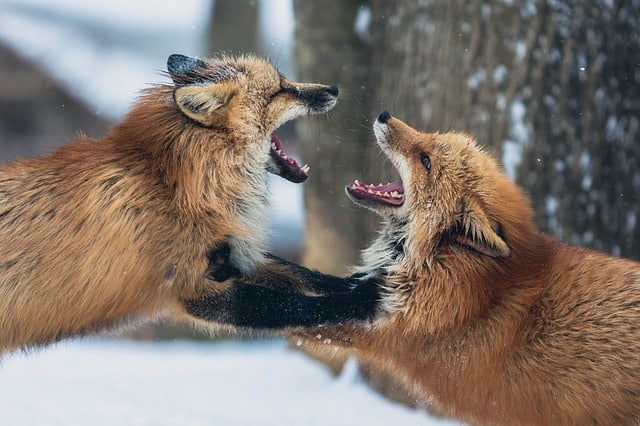 Foxes are highly territorial canines who protect themselves by fighting and establishing dominance early in life. Red foxes will begin fighting early by bodyslamming other kits. They develop fighting skills early and practice defensive tactics on other members in their leash of foxes.

It is normal for red foxes to fight by standing on their hind legs, bodyslamming, and wrestling. They will push their opposing fox by their shoulders until they either fall to the ground or Red foxes will also submissively back away before fighting to protect themselves. Typically, the larger red fox or red fox that established an alpha personality early will win.

Red foxes are intelligent, and they do not instigate fights they cannot win. They have many defensive tactics to protect themselves and their young from predators. For instance, the red fox may play dead when predators attack foxes. Playing dead may cause the large predators to lose interest in hunting them.

Foxes are not typically aggressive animals, but they will fight over necessities like territory, food, and defending kits. They are highly territorial and defensive animals that will use their teeth, claws, and body weight to fight each other.

The red fox is defensive, so they will fight to protect their young. They will also fight for the affection of their mates.

The fox competes with other foxes for territory. Foxes may try to take over territory from other foxes if they think they have a better chance of controlling the land. Crossing territory happens both accidentally and purposefully, meaning the red fox may not know they are crossing claimed territory when they do it.

Foxes do not always know that a fox occupies the land if they do not mark their territory.

Foxes Fight Over Their Young

Fighting other foxes for the safety of her baby foxes, also known as kits, is common behavior for a female fox (vixen). If another fox tries harming her kits, the vixen will protect them by attacking with one of many defense tactics. These defense tactics include biting, scratching, and wrestling.

If the kits are still young enough, the male fox (dog fox) may also defend his kits. In the early days, male foxes are a large participant in raising and defending their kits from predators.

During mating season, male foxes will often fight over mates. They engage in wrestling on their hind legs. The winner of the fight wins the heart of the female fox.

Foxes fight by standing on their hind legs and then bodyslamming the other. They will wrestle each other to the ground. Red foxes are highly intelligent animals who choose to protect themselves rather than fight.

Foxes Wrestle Each Other

When fighting, foxes will push each other’s shoulders to overpower the other fox. The foxes wrestle until one of them falls from their embrace, is bit on the neck, or retreats. Fighting and wrestling is a battle for dominance where the strongest fox will win -the last fox standing wins.

Foxes Protect Themselves (And Their Kits) By Retreating

If a fox thinks it is in danger, it may retreat. Retreating is especially common when foxes cannot defend themselves against large prey. They may also retreat if they have pups nearby.

Body slamming is a common form of defense for the young fox. They use their body weight to catapult themselves against each other, often for food. The more dominant fox will win the bodyslamming. In addition to winning food at the moment, the winner of bodyslamming as kits establishes lifelong dominance.

They learn this as kits and use it to fight for food throughout their lives. A fox’s family member uses bodyslamming as a protective measure to remove a predator from the red fox’s body.

Do Foxes Seriously Hurt Other Foxes, Or Do They Just Fight For Show?

Fighting for pleasure is common in the canine species, including the red fox. Foxes at young ages are more likely to be playful than older foxes. They are active, playful, and energetic. Young kits typically act aggressively to establish dominance among their leash of foxes.

Depending on their age, the red fox may have different reasons for fighting. In adulthood, they will continue playing. Although, as their leash of foxes disperses, the reason for fighting becomes more serious and aggressive. They may hurt other foxes without intending to.

Foxes that do not belong to the same leash will fight because they act competitively over territory, mating, food, and more.

How Foxes Defend Themselves Against Predators or Other Foxes)

Foxes Adapt To Their Environments

Foxes will defend themselves by playing dead when confronted by their prey. Playing dead does not always work as an efficient way to evade predators. However, it is common for foxes to avoid being attacked by large predators.

How Do Foxes Protect Their Young?

Foxes are highly protective of their young. The most common way to defend their young is by distracting or attacking the animals that try to eat their kits.

Red foxes attack approaching predators if they invade their territory and approach their young. Typically, young foxes stand on their hind legs and place their forefeet on the shoulders of the other fox. They open their mouth wide to show their sharp teeth.

After birthing them, red foxes will move their kits to various locations to keep them safe from predators. When they think their kits are in danger or a predator nearby, they will choose a new place for their kits.