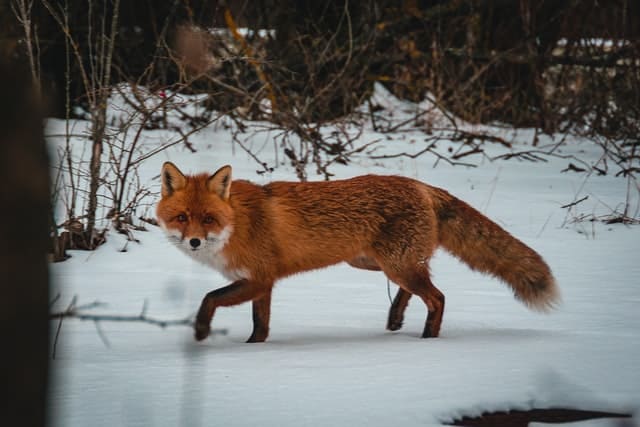 Red foxes are generally a reddish-brown color, but they can come in several different colors when they have genetic mutations. The cross fox is the red fox’s most common genetic mutation. Fur is important to foxes for many reasons, and it is important to note that the seasons and age of the fox can cause a fox’s fur color to vary.

Red Foxes are Red – But Can They Have Other Colors?

Red foxes are typically red, but they can have many other colors because of genetic alternations, resulting in what the animal community calls fox morphs. One of the most popular genetic mutations is cross foxes, which causes the red fox’s fur to mutate into two or more colors.

The cross fox has small sections of black fur on its back, paws, legs, and saddle areas. The cross fox often has a white ‘bib’ under its muzzle.

Silver foxes are a genetic variant of the red fox caused by a melanistic morph. According to Wildlife Online, the silver fox is the red fox’s earliest documented form of genetic mutation, and they account for 10% of the color-morphed fox population.

The melanistic genetic mutation causes the red fox’s coat to become black, with a complimentary silver hue. Other versions of the silver fox may also have varied silver colorations instead of black. Most silver foxes are in cold climates.

Why Are Foxes Red?

The red fox’s red fur is an evolutionary adaptation to help the fox blend in at dusk, which casts an orange glow on the ground. Dusk is the time the red fox comes out to hunt each night.

Foxes’ fur will often change colors throughout the year as their light exposure changes. The light exposure is closely linked to regional locations. For instance, arid regions have paler coats.

Do Foxes Turn White In Winter?

Foxes sleep outdoors in the winter, so they become covered in a blanket of white snow. The blanket of snow covering the fox helps them stay camouflaged. A fox’s fur might become lighter during winter because of the lack of sunlight.

If you’ve seen a photo of a white fox, it might be an arctic fox, however. The arctic fox is the red fox’s cousin.

Foxes of nearly every color exist, including yellow, brown, and black. There are foxes of multiple colors, including albino and cross-foxes (mentioned above).

A fox’s fur typically depends on its region since different regions are closer to the sun and have different food opportunities.

How Does a Fox’s Fur Help Them Survive?

The fox’s fur helps them survive because of its texture, color, and water resistance. The fox also has a sublime winter coat, which keeps them warm during winter. These two things together make the fox capable of surviving in any element.

At dusk, the sun reflects onto the fox’s body. The more a red fox blends in with its environment, the better it catches prey and evades predators.

Fur Is An Insulator

Fox’s fur acts as a natural insulator, helping them survive daily temperature changes. It also helps red foxes feel warm in cold and treacherous environments. This insulation makes them comfortable in cold environments. At the end of fall, fox fur grows longer, so the foxes can withstand lower temperatures.

Fur Acts As A Raincoat

Foxes have water-resistant fur that acts like a raincoat in rainy or snowy weather. The texture of their fur helps them accumulate snow in the winter, so their appearance becomes white. It also prevents snow from getting the red fox wet since it rolls off the fox instead of melting.

Sun can damage a fox’s skin if they do not have the right protection. Their thick fur gives the fox proper protection against the sun, acting as a permanent layer of ultra-strong human sunscreen. Without fur, they can get sunburns and are more likely to get abrasions.

As Spring begins, foxes shed their thick winter coat. This is called their molting, where they shed their fur from the top upwards. After shedding their fur, the fox appears much thinner. However, it does not last long.

Sometimes, the way a fox’s coat appears after they have shed their winter coat looks similar to a fox with mange or another illness. They will have patches of fur around their body but will otherwise act entirely normal.

When foxes completely lose their fur, they can have fatal outcomes, like sunburns and hypothermia. Fur repels water and keeps foxes warm.

Without fur, foxes are vulnerable to severe weather conditions. In winter, furless foxes cannot stay warm, and melting snow will cause hypothermia. Sunny weather during summertime leaves the red fox vulnerable to sunburns and other sun-related skin conditions.

Do Foxes Have Whiskers?

Foxes have whiskers, which they use for balancing and measuring distances. These whiskers are on the faces and backs of the fox’s legs. Whiskers work as a form of sensory vision, which detects the fox’s capability to balance.

According to VCA Animal Hospital, whiskers are hairs that aid the red fox’s vision to provide additional sensory information as they move. The bending whiskers, which identify things throughout the red fox’s day, control much of the fox’s activity but have no feeling.

How Does A Fox’s Fur Feel? Is It Soft?

Fox fur is soft, especially the tail. Since their fur is so soft, many people poach these small canids for their soft pelts. People will also farm foxes to sell their pelts. Most of the time, people will use the pelts for fashion purposes.

Are Fox Tails Skinny or Bushy? What About Young Foxes?

Red foxes’ tails are long and bushy, with the signature white tip at the end helping differentiate them from the grey fox. As a kit, newborn foxes are born with a white-tipped tail.

The newborn red fox’s tail is skinny and fluffy, similar to velvet. The young fox has a fuzzy tail. However, it is not bushy like the adult red fox’s. The red fox’s tail will appear fuzzy -and not bushy- for the first few months of its life.

An adult fox’s tail is roughly 12 inches to 22 inches long, depending on gender and genetics. As a baby, their tail is 3 inches, or 7.5 centimeters long. Over the course of a few months, the fox grows into its full size, including its bushy tail.

Can Foxes Regrow Their Tails If They Lose Them?

Foxes cannot regrow their tails if they lose them. According to the Harvard Graduate School of Arts and Sciences, no mammals can regenerate body parts after losing them. Regeneration of body parts is exclusive to the amphibian and many insects.

Since the fox is a mammal, it cannot regenerate its body parts as an amphibian would. If their tail were to get cut off, a fox could not regenerate their tail. The only thing the red fox can regrow on its tail is its fluffy fur.

Do People Hunt Foxes For Their Fur?

People will often hunt foxes for their fur because they are easy targets. Since foxes sleep out in the open, they can sometimes be easy to spot, depending on where they sleep.

Are Foxes Farmed For Fur?

Unfortunately, foxes are farmed for fur because of their softness and versatility. These small canids are not domesticated, but approved wildlife experts can tame red foxes enough to take care of them temporarily for farming purposes.

In recent years, the fur market has declined significantly. People continue to farm and hunt foxes because of the quick money they can make off the soft pelts. There is only a moderate demand for fox pelts in the fashion industry because of the leather and the soft fur.

Why You Should Go For Faux Fur

The only thing fox farmers and poachers care about is the final product and the money they make, not the safety and care of animals.