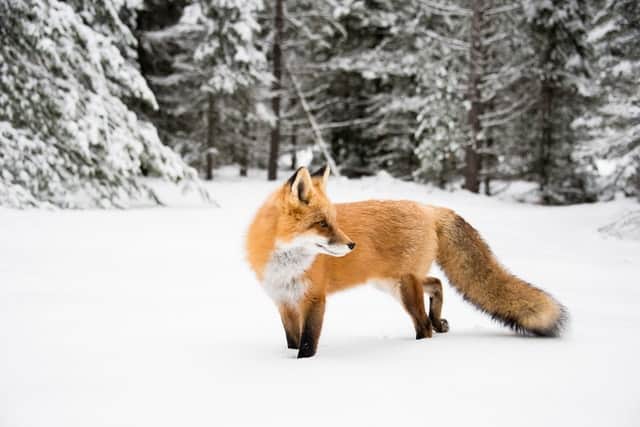 Foxes have great hearing that helps them detect prey, like small mammals from far away. They can hear prey moving underground and beneath snow, leaves, or other natural landscape. The fox’s hearing is significantly better than human hearing, with a capability of hearing over 20,000 hertz more than the human ear.

This article discusses red fox hearing and how much better their hearing is than humans’.

Do Foxes Have Good Hearing?

Foxes have excellent hearing. The main purpose of the fox’s hearing is to help them find food. This supreme hearing helps foxes find food at nighttime as they hunt food after dark. It also helps them find underground food. In addition to detecting prey, foxes use their keen hearing to identify each others’ voices and calls.

How Much Better Are Foxes’ Hearing Than Humans’?

Foxes have much better hearing than humans. Hearing can be measured by the pure frequencies animals can hear, called hertz. It is also measured by the intensity of these hertz, called decibels.

How Far Away Can Foxes Hear Sounds?

How Do Foxes Use Their Hearing For Hunting?

Foxes use their hearing to detect various types of prey, primarily small mammals like rodents. The fox’s excellent hearing is their main way of locating prey. It helps the fox detect, stalk, and trap their prey.

Foxes Use Hearing to Stalk Their Prey

Foxes use their impeccable hearing to stalk their prey before pouncing. Stalking prey with their hearing is common in winter, where the fox will listen for small rodents under thick blankets of snow. The fox will use its great hearing to follow the unknowing prey and then pounce on it once it hears the chance.

Foxes Use Their Hearing to Detect Prey

Foxes have excellent hearing, which they use primarily to detect small prey from far away. They rely on their sharp hearing to detect animals from various distances, including across plains, rivers, and even beneath or inside thick surfaces like tree trunks. Hearing their prey before they see it helps them pinpoint where their prey is so that they can surprise attack them.

These noises can be otherwise inaudible to other animals, especially when underground. However, the fox’s supreme hearing causes them to easily detect rustling and other low-frequency sounds because of the chamber in the fox’s eardrum, which echoes the tiniest sounds. In other words, a faint noise that a human might hear would be significantly louder than the fox.

This is why foxes will often sneak up on a location and suddenly leap, snout-first, at a specific location aiming for its prey that the fox is able to locate solely by hearing.

How Does The Weather Interfere With The Fox’s Hearing?

Bad weather can potentially impact the fox’s hearing because of the sounds some storms make. So, based on the severity, the fox’s prey’s noises, such as footsteps, rustling leaves, and more, can be covered up. However, adaptations in the fox’s behavior and hunting tactics have ensured that weather does not make a major impact on the fox’s hearing.

Bad weather is great for small rodents and other fox prey because thunder, wind, and severe rainfall mask their sounds and vocalizations. This helps the prey stay hidden and protected through the night (and day). Movement noises such as rustling leaves and footsteps might also be masked, which can be difficult for the fox when hunting. Overall, this bad weather is unfortunate for the fox, whose hearing can be stifled.

Over generations, the fox has developed important front-facing ears, creating noise cancellation in loud situations. Thanks to the fox’s front-facing ears, foxes may still identify their prey in temperamental weather. Foxes rotate their ears like antennae in the direction of their intended prey. The fox blocks out all other noise by directing its ears in that direction. Their ear functionality is similar to the cat.

Do Foxes Hear Better Than Wolves, Coyotes, and Dogs?

Foxes have a similar hearing capacity to the coyote, wolf, and domestic dog. The fox has such close hearing to these canines because they belong to the same family. Therefore, their hearing capacity (the hertz and decibels) are the same.