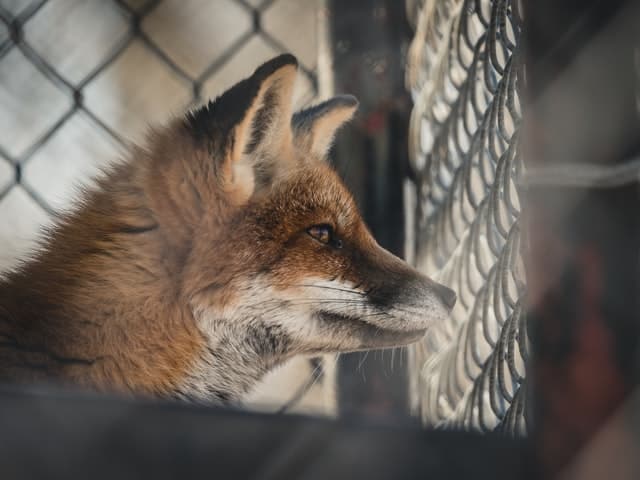 Owning a red fox for a pet is legal in fifteen states. However, the red fox can be difficult to care for because of its unpredictable temperament, strict diet, and special habitat. Most legal states have set strict guidelines in place regarding red fox ownership. You can only own a red fox in fifteen states.

People do not trust these wild canines in urban environments because they believe you cannot train them. However, many states are on board with breeding and domesticating these animals.

The countries and states you can keep the red fox in are not exclusive to the United States. Several countries in Asia and Europe allow ownership of red foxes with the proper documentation and veterinary approval. As red foxes become more popular, more states and countries legalize ownership.

Since the fox is a wild canine, it is considered an exotic pet. Exotic pets are not legal in every state, and they may require a license for owning or especially breeding.

Why Are Foxes Illegal To Keep As Pets In Some Places?

Foxes are exotic animals that can be dangerous to keep as pets because of their natural predator instincts. If you keep foxes as pets, the likelihood of escaping can be fatal to domestic animals.

The red fox is a natural predator whose behavior is unpredictable. They can be affectionate and kind. However, foxes naturally fear humans and are born predators who would rather hunt prey than eat something already hunted (although they will gladly do that too). They may also become dangerous to you and other pets when agitated or hungry.

Foxes mistake small or medium-sized mammals for prey and may attack accidentally. If your state has no law against enclosures, your fox may mistake your pets for prey by instinct.

Wild foxes carry diseases that can be dangerous to humans and other pets. If you plan to capture a red fox as a pet, you should take your new pet to an exotic animal veterinarian immediately for a health exam.

Your red fox will likely need rigorous treatment to treat them of parasites and diseases. They will also require quarantine from your other pets or foxes.

Foxes Are Difficult To Care For

Owning a red fox as a pet is not as simple as other pets because healthcare can be difficult to find. There are not many exotic wildlife vets readily available. So, you must be aware of nearby exotic pet veterinarians before purchasing (or humanely capturing) your red fox.

It Is Inhumane To Keep Foxes As Pets

Keeping foxes as pets is inhumane, especially if you take them from the wild then force them to live in captivity. You interfere with the fox’s natural life processes, such as their mating and hunting practices. Taking a fox from the wild prevents them from developing naturally and fulfilling its instinctual needs.

In Which States Is It Illegal To Own A Fox?

It is illegal to own a fox in most states because of the risks associated with the wild canine. In these states, owning a red fox can result in penalties like fines. Always check the legality of owning a fox in your state before adopting one.

Some states where owning a red fox are illegal include the following:

In New York, it is illegal to own red foxes. However, you may own fennec foxes without the need for a permit. New York law strictly enforces this red fox ban.

It is illegal to own red foxes in Texas because the Texas Parks and Wildlife Department considers them native, fur-beating mammals. It is illegal to possess these native animals as pets or for any other reason. Non-native foxes are negotiable by jurisdiction.

Where Is It Legal To Own A Red Fox?

Owning a red fox is legal in fifteen states. Most states are in the central United States, including Missouri, Kentucky, Arkansas, and Nebraska.

It is common in most legal states for owners of red foxes to have several restrictions or limitations, such as required permits. However, this is not the case in all states, such as Arkansas, where no permits are required to own a red fox.

Before adopting or purchasing a red fox, you must check which fox species your state permits. While some states permit the ownership of certain species, they may not allow the ownership of the red fox. Breed restrictions are true for New York, which allows you to own the Fennec fox but not the red fox.

States where owning a red fox is permitted include:

Every legal state has restrictions on owning red foxes. For instance, some states require people to obtain permits, and others require annual payments.

You cannot possess non-native wildlife or wildlife kept in unhealthy conditions, including uncleanly or small enclosures.

Owning exotic animals like the red fox is very common in Florida. The Florida Fish and Wildlife Conservation Commission requires Class 3 Wildlife licenses for people interested in owning red foxes. You cannot possess a red fox unless you have a permit and meet wildlife enclosure regulation requirements. It is simple to obtain one of these permits if you follow the guidelines.

The Indiana Department of Natural Resources allows all fox species if the owner has proper permits. You must obtain a permit before owning a red fox and fulfill any additional procedural requirements necessary. To own a red fox as a pet, you must also provide veterinarian documentation confirming positive health. They must be free of disease.

It is legal to own a red fox in Missouri. The Missouri Department of Conservation requires interested parties to have a wildlife permit for the Class 1 wildlife species. In addition, owners must obtain the fox from a facility within Missouri. Owners must also take care of the red fox outdoors in a proper enclosure, abiding by structural standards like size, security, and more.

There are several regulations in Nebraska, which make keeping red foxes as pets difficult for people. However, it is legal to keep red foxes as pets. First, owners must acquire a Captive Wildlife Permit, and second, you must breed the red fox if you keep them in captivity.

To own a fox in North Dakota, you require a nontraditional livestock permit. The North Dakota Game and Fish Department will first evaluate your enclosure for safety and structural integrity before issuing the permit and approving your ability to care for a red fox.

To own a red fox in Ohio, you must obtain a non-commercial propagating license. You may obtain this license from the Ohio Department of Natural Resources Division of Wildlife.

Owning a red fox in Oklahoma is legal if the owner possesses a noncommercial wildlife breeder’s license. They must acquire this license before they adopt or purchase the fox.

It is legal to own a red fox in South Dakota. Owning a pet fox in South Dakota requires a permit which costs a maximum annual fee of $100 per fox. This annual fee covers the cost of the required permit to possess nondomestic animals. You must pay for each fox owned, with no limitation on the number of foxes you may own at one time.

In Tennessee, red foxes are considered a Class II animal that people must acquire a permit to own. These permits cost $31. You may also have to pay an additional yearly fee to maintain your facility. All future owners must pass a facility inspection before acquiring their permit or fox.

To purchase a red fox, go to any licensed facility.

You must have the following:

Red foxes are the only fox species legal in Utah. Title 23 of the Wildlife Resources Code of Utah regulates red fox ownership, asserting you can only own domesticated red foxes in Utah. These red foxes must be privately owned and domestically raised.

There are several ways to own a red fox in Wisconsin. In every case, you must obtain the fox legally by purchasing it through an approved vendor. The vendor must be a breeder who raised the fox in a domesticated habitat.

You can own a fox in Wisconsin if you:

After treating illnesses on red foxes, temporary owners must receive documentation that treatment was successful before releasing the fox back into the wild.

Red foxes are legal in Wyoming. You do not need a permit to own a red fox in Wyoming. However, all other fox species like the grey or fennec fox require a permit.

What Countries Is It Legal To Own Foxes?

Owning red foxes is legal in many countries, including the United States. People are domesticating this animal more often because of its cute appearance and similarity to domestic dogs. Furthermore, the unique red fox resembles the domestic cat, making it an ideal pet for both cat and dog lovers.

In addition to the United States, it is legal to own red foxes in several other countries. You may own the controversial pet in several Asian, European, and African countries. Most countries have limitations based on region or jurisdiction.

Foxes are legal in many popular parts of Canada, including Ontario and British Columbia. Owning foxes is at the jurisdiction’s discretion, and it may require a permit and fee from the owner. A veterinarian examination proving the animal is in good health is required in every jurisdiction.

Owning a red fox is not legal in Australia because of the dangers associated with the wild Canidae. For several years it was legal to own red foxes in Australia. However, this illegal status became official in 2015.

It is legal to own red foxes in Japan without a license. However, you must purchase them from a reliable breeder and possess their purchase records throughout their lifetime.